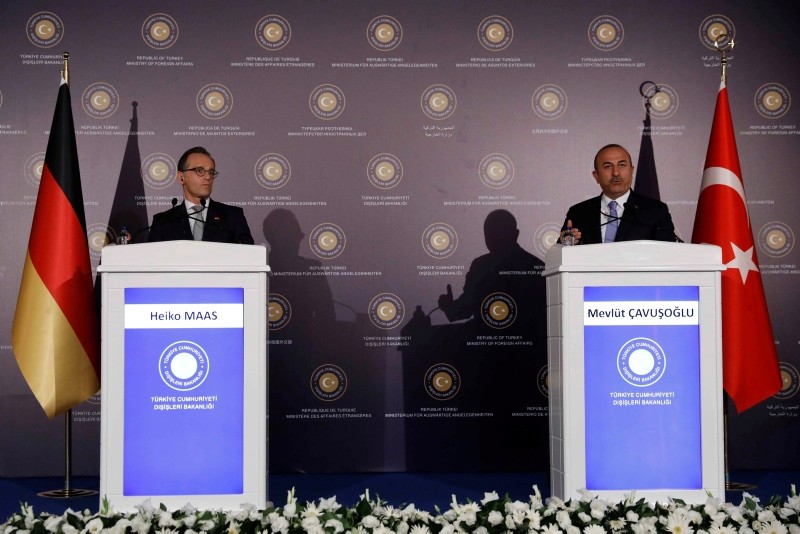 Turkey is right to be concerned over Idlib, German Foreign Minister Heiko Maas said late Wednesday during a press conference with his Turkish counterpart Mevlüt Çavuşoğlu in Ankara, adding that the German government supported the upcoming Tehran summit.

"Turkey is right in its concerns over Idlib, we support the Tehran summit and we are working together with Turkey to prevent escalation in Syria's Idlib region," the top diplomat said.

Erdoğan, Russian President Vladimir Putin, and Iranian President Hassan Rouhani are scheduled to meet in Tehran on Friday for a trilateral summit on Syria.

Meanwhile Çavuşoğlu, commenting on the bombing of Idlib, said the move was wrong and such attacks should be stopped, adding that Ankara was going to push at Friday's planned summit in Tehran for a decision to stop such attacks.

He said a common strategy was needed to eliminate radical groups in Idlib but the continuation of attacks could be disastrous.

"[The] regime's desire to attack and capture Idlib is clear," he added.

He said Turkey did not bring radical groups to Idlib and questioned why those groups were brought to Idlib with their weapons from Aleppo, Eastern Ghouta and Homs.

"The plan was clear from the start. These groups will go there and then, by pretending the existence of those groups there, it [Assad regime] will attack to capture it," he explained.

He added that Turkey and Germany's position on Syria and other issues overlap.

Maas said those who will flee from Idlib should be helped. "We talked how we can help. Turkey is our important partner on this issue," he said.

President Recep Tayyip Erdoğan had also warned that an offensive on Syria's northwestern Idlib province by Bashar Assad's regime forces would lead to a bloodbath for civilians and a humanitarian tragedy. Many other Turkish officials have also many times reiterated Turkey's stance on the matter.

Russian warplanes on Tuesday pounded civilian and opposition targets in Idlib. Located near the Turkish border, Idlib is home to more than 3 million Syrians, many of whom fled from other cities following attacks by regime forces.

The Syrian regime recently announced plans to launch a major military offensive to the area, which is controlled by various armed opposition groups.

Çavuşoğlu also said he and Maas discussed steps to improve and restore relations between Ankara and Berlin.

"We are making intense efforts with Germany to normalize and strengthen bilateral ties," he said.

Maas' trip to Turkey comes ahead of a joint meeting on Syria between Turkey, Russia, Germany and France, and also Erdoğan's key visit to Berlin on Sept. 28-29.

Turkey and Germany have been in a normalization process for some time after the two countries were locked in heated debates and ultimatums for one-and-a-half years over a series of issues, including PKK and Gülenist Terror Group (FETÖ) terror groups' presence in Germany.

Ankara's relations with Berlin have been strained by PKK demonstrations and the presence of the terrorist organization's seniors in the country, which Ankara labels as tolerance of terrorism.