Ankara urges all parties in Idlib to adhere to cease-fire 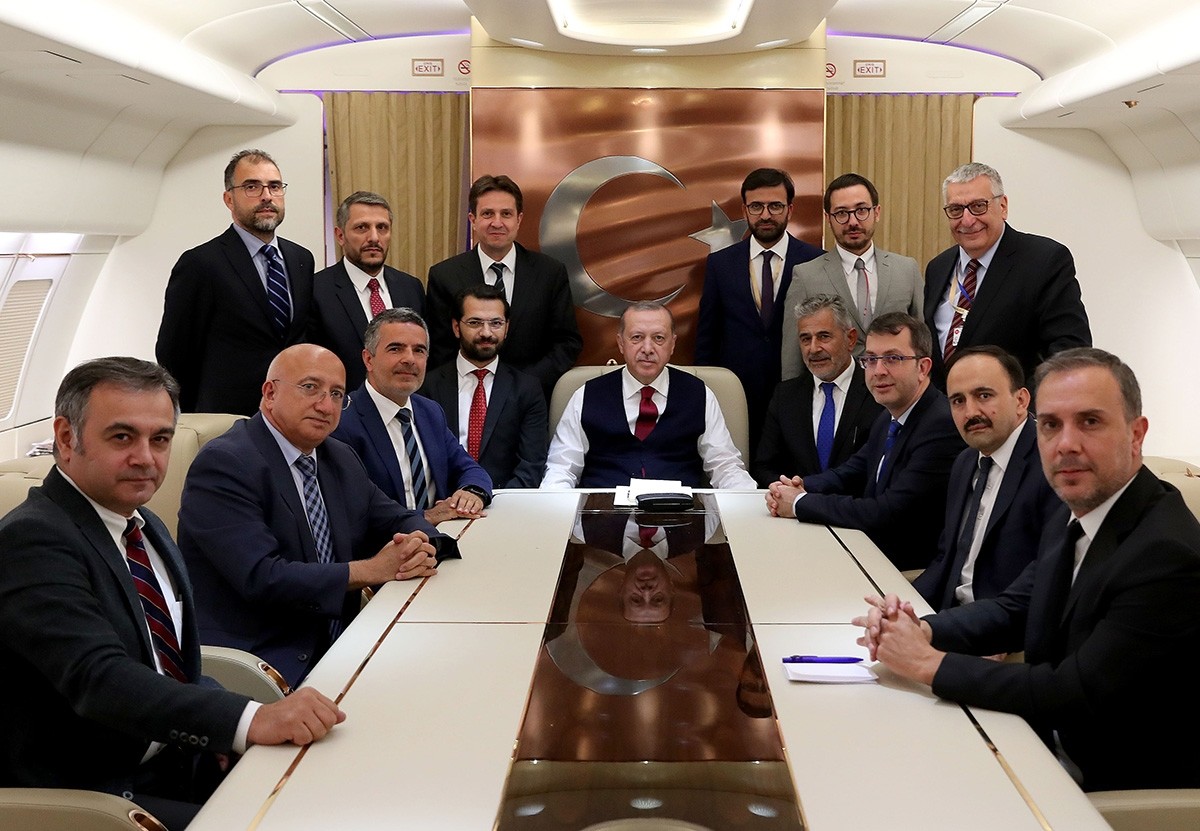 President Recep Tayyip Erdoğan has made it clear – Turkey wants all parties in northwestern Syria's Idlib to adhere to the cease-fire agreement that was sealed in the Astana process.

Speaking to reporters on Saturday on his way back from Tehran where he met with his Iranian and Russian counterparts in a tripartite summit on Syria, Erdoğan added that Ankara won't allow a fait accompli by the Assad regime in the province.

The president also emphasized that Turkey can't bear more refugees from Idlib, where 3.5 million people live, including an estimated 1.5 million internally displaced refugees coming from other parts of the country, in case of a large-scale offensive by the regime, which is being backed by Russia and Iran.

President Erdoğan said that Turkey opposes a military solution and supports a political one in Idlib. He added that the territorial integrity of the country should be maintained and all terrorist groups have to be eliminated.

"We can't allow fait accompli in Syria. Three guarantor states declared the necessity of this. We support the elimination of all terror groups in Syria, including Daesh and the Democratic Union Party (PYD) and the People's Protection Units (YPG) [the PKK's Syrian affiliates]. We showed our determination with Operation Euphrates Shield and Operation Olive Branch."

Turkey launched Operation Euphrates Shielded with the Free Syrian Army (FSA) on 2016 to drive Daesh terrorists away from its borders. As a result of the operation, nearly 3,000 Daesh terrorists were eliminated and a 2,000-kilometer-square area in northern Syria was liberated, including Jarablus, Dabiq and al-Bab. Also, militants of PKK-linked terrorists were ejected from Afrin with Operation Olive Branch, Turkey's second cross-border operation in Syria, which was launched earlier this year.

He said that Turkey should not pay the price of attacks on civilians in Idlib, which would trigger new refugee waves.

"We discussed the latest situation in Idlib at the summit, as well as in our bilateral meetings with Mr. [Hassan] Rouhani and Mr. [Vladimir] Putin. We made our negotiations in the best way, which was also broadcasted on television. The article of the final declaration emphasizes this point," he said.

The president added that Turkey will not accept an attack on civilians with the excuse of the existence of terrorist groups. Erdoğan emphasized that moderate opposition groups are also in the region.

"We surely support eliminating terrorist elements in Idlib. All steps in the region should be taken in accordance with the spirit of Astana process and hinge upon the accord between the three countries. Technical committees will continue discussions to coordinate these steps. We also spoke with Mr. Putin [on this issue]. I believe we will get a positive outcome on Idlib," he added.

Local reports had suggested that Turkish units are showing efforts to dissolve the Hayat Tahrir al-Sham (HTS), which is accused of having links with al-Qaida, and other affiliated groups to dissolve and possibly leave the region.

Previously, Turkish officials said that those radical groups in Idlib also disturb the moderate opposition and civilians and caused difficulties for Turkey while it was establishing observation points.

President Erdoğan also said that representatives from Russia, Germany and France will come together with Turkish officials on Sept. 14 in Istanbul to make preliminary preparations for the quadripartite summit on Syria.

He had announced that the most senior representatives of the four countries will gather in Istanbul this month within the framework of support to find a permanent solution to the Syrian civil war in a parallel process that will contribute to the Astana process that was launched last year by Turkey, Russia and Iran.

Erdoğan said that Turkey and the U.S. are not in the same ranks in Syria, criticizing Washington's cooperation with PKK-affiliated groups in the country.

"They threaten to retaliate in case of a chemical attack by the regime. It is not a proper approach to stand against the use of chemical weapons but ignore civilian losses via conventional weapons. The U.S. is in a spectator position now. It doesn't keep any of its promises. Did it stick to its word in Manbij? It did the same thing in Deir ez-Zor. It supports the YPG and PYD in Raqqa," the president concluded.