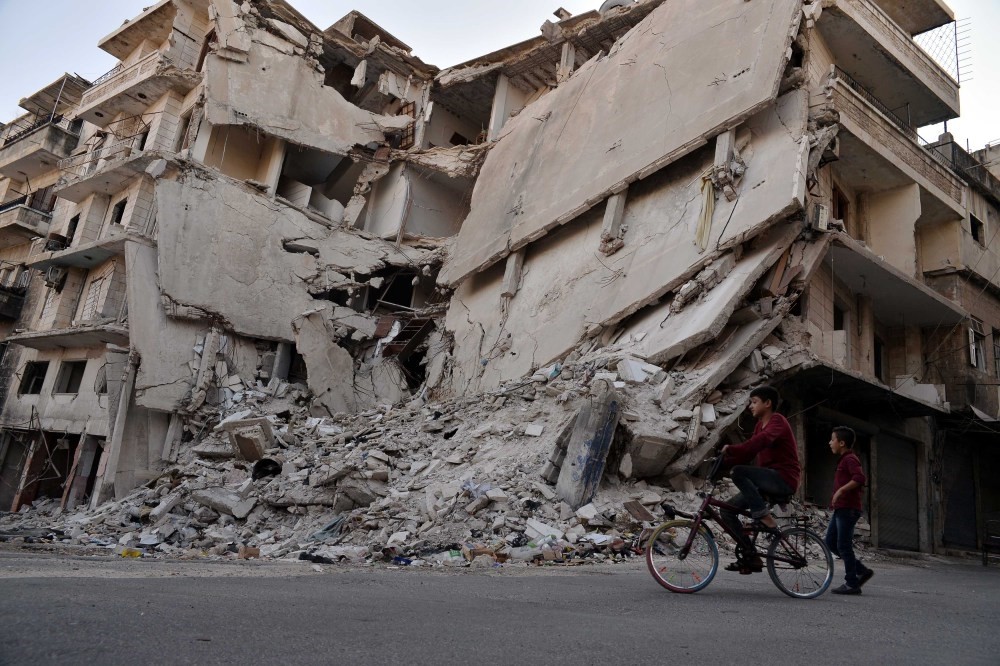 Idlib was designated as a de-escalation zone in May where acts of aggression were expressly forbidden. However, the Idlib de-escalation zone has been the target of fierce airstrikes by Russian and Assad regime forces.
by Daily Sabah Sep 11, 2018 12:00 am

The recent developments in Idlib, Syria have urged international actors, including Turkey, to accelerate efforts to bring calm to the volatile region. While most of the international community is trying hard to avoid a humanitarian crisis in Syria, diplomatic efforts have also been ramped up to establish a constitutional committee in the country.

United Nations Special Envoy to Syria Staffan de Mistura met with senior officials from Turkey, Russia, and Iran yesterday to establish a Syrian constitutional committee, which is expected to aid the political transition in the country in the post-war period.

In order to continue the process that was launched previously, de Mistura is expected to meet with the guarantor countries of the Astana process - Turkey, Russia, and Iran - today.

On Friday, de Mistura will meet with officials from Egypt, France, Germany, Jordan, Saudi Arabia, the U.K. and the U.S.

Establishing a constitutional committee was decided by the representatives from the Syrian regime and the guarantor countries during the Syrian National Dialogue Congress on Jan. 30 in the Russian resort city of Sochi. It was an attempt to bring all warring parties in the Syrian conflict, excluding the terrorist groups, to the table to facilitate the U.N.-sponsored peace talks in Geneva. Ankara strongly voiced support for the territorial integrity of Syria, stressing that terrorist groups cannot play the slightest role in the future of Syria. Prior to the congress in Sochi, Turkey had repeatedly insisted that while all sections of Syrian society should be included in the talks, no terrorists or terrorist groups should be allowed to join.

Following the congress, President Recep Tayyip Erdoğan and his Russian counterpart Vladimir Putin hailed the decision to form a constitutional committee as its "most important outcome," asserting that the progress made at the meeting enhances both the Astana and Geneva peace talks and the U.N. Security Council resolutions.

The final declaration of the Syria summit held by the guarantor countries in Russia in July highlighted the establishment of a constitutional committee.

Last week, commenting on the situation in Idlib, de Mistura emphasized the significance of talks between Turkey and Russia saying that the countries "hold the key for a soft solution." 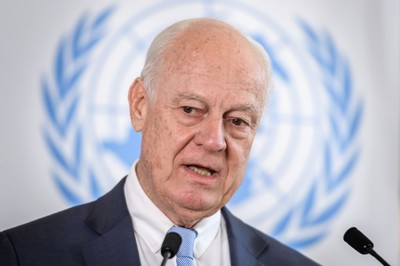 In relation to the diplomatic efforts, President Erdoğan stated Friday, "Representatives of the three guarantor countries will meet again in Geneva with the U.N. secretary-general's special envoy for Syria in the coming days."

"Establishing and making this committee, which is on the agenda thanks to the Astana process, will bring a new dynamism to the political process," he said following the Tehran summit with his Russian and Iranian counterparts. Regarding the issue, Russian President Vladimir Putin also said they agreed to help in the process of establishing the committee.

As increasing tensions in IdIib fueled concerns for civilians in the town, all eyes were fixed on the Tehran summit to find a way to avert a possible disaster.

Turkey's concerns center on fears that a comprehensive offensive toward Idlib would result in civilian casualties and a new wave of refugees toward Turkey, Europe and the wider region.

Erdoğan called on opposition groups to lay down arms and urged the two leaders for a cease-fire in the critical summit. He voiced concerns for the three million plus civilians living in the region.

"If we can declare a cease-fire here, it will be one of the most important steps of the summit, and it will relieve the civilians," he said.

As part of the efforts to limit the violence in the country, Turkey, Russia and Iran had previously agreed to establish so-called de-escalation zones across Syria, including in the northern province of Idlib and parts of neighboring Latakia, Hama and Aleppo.

Under the Astana agreement, Turkey established 12 observation points from Idlib's north to south aiming to monitor and sustain the current cease-fire agreement for the de-escalation zones, deliver humanitarian aid and ensure the secure return of displaced people. The first of the trilateral summit at a presidential level was held last year in Russia's Black Sea city of Sochi and the second meeting was held in Ankara this year in April.

In the joint statement, announced after the summit, the parties called on the U.N. and its humanitarian agencies to help Syria by providing additional humanitarian aid.

"There could be no military solution to the Syrian conflict" the statement read, adding that the ongoing conflict in Syria "can only end through a negotiated political process."

It also said that Ankara, Moscow and Tehran have "emphasized their strong and continued commitment to the sovereignty, independence, unity and territorial integrity" of Syria and they have "agreed to continue their joint efforts in finding a permanent solution to the ongoing crisis in the country."

Turkey has been playing a pivotal role in efforts to prevent a humanitarian crisis in Syria. The country has been warning that attacks on Idlib would result in a massacre and prompt a new refugee wave.

Ankara's concerns have been shared by European countries as well.

French Defense Minister Florence Parly stated on the weekend that France has been exerting all efforts to prevent a humanitarian crisis and stressed that they have been involving in talks with Turkey, Russia, and Iran.

The EU warned yesterday that airstrikes carried out by the Bashar Assad regime and Russia would lead to "catastrophic human and humanitarian consequences" in the Idlib and Hama provinces in northern Syria.

Answering a question on casualties caused by regime and Russian airstrikes in Syria's Idlib, EU foreign affairs spokeswoman Maja Kocijancic said: "There is a lot of suffering and the military offensive in Idlib is not to go ahead."

"We continue to stand and talk to various interlocutors in this issue," Kocijancic added.

In a press conference with his counterpart in Ankara last week, German Foreign Minister Heiko Maas highlighted that Turkey's efforts are significant and added that they support Turkey.

To discuss the situation in Idlib, senior representatives from Germany, France and Russia are expected to arrive in Turkey for a summit.

Meanwhile, regarding the Syrian conflict, the Bild newspaper reported on Monday that Germany's conservative-led defense ministry was examining possible options for joining U.S., British and French forces in any future military action if the Syrian government uses chemical weapons again.

Commenting on the issue, the leader of the Social Democratic Party of Germany (SPD), Andrea Nahles, stated, "The SPD will not agree – either in Parliament or in the government – to the participation of Germany in the war in Syria."

He added that they support the foreign minister in his efforts to avert a humanitarian crisis through discussions with Turkey and Russia.