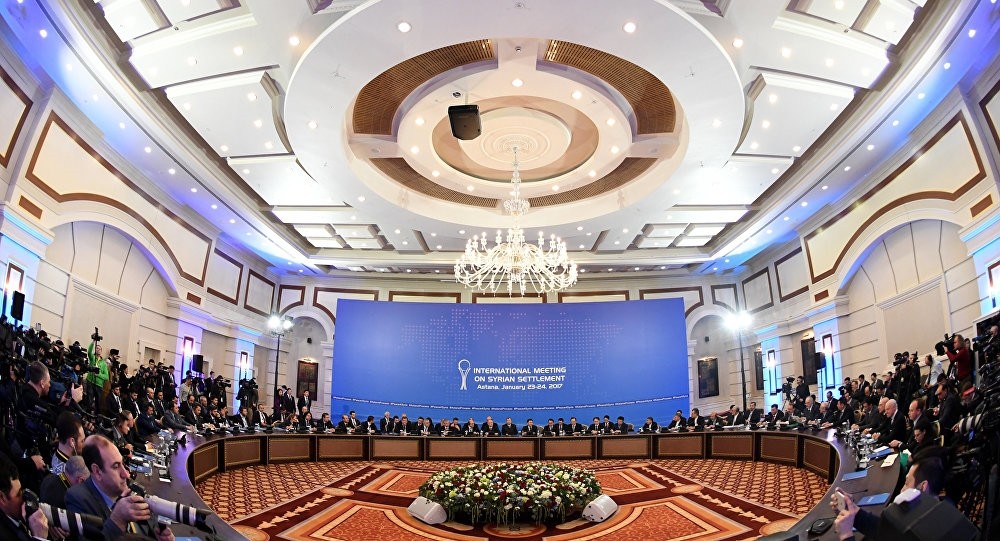 The Astana peace process is at stake as a Syrian regime offensive looms over Idlib, say experts

Despite having different perspectives regarding the developments in Idlib, northwestern Syria, the three guarantors of the Astana process have been continuing dialogue and they are showing no signs of leaving the negotiation table until a solution is reached. Yet experts argue that if a full-scale operation is launched indiscriminately targeting people in the region, the efforts would be damaged.

"Russia is determined to eliminate terrorist groups from Idlib. It does not seem to be stepping back from its argument of clearing terrorists such as Hayat Tahrir al-Sham (HTS). At the same time Russia is not expected to disregard the diplomatic efforts and dialogue that have been conducted along with Turkey," Eşref Yalınkılıçlı, a Eurasia analyst, stated."While Turkey is against all kinds of attacks that might cause harm to the civilians in the region, if a full-scale operation on Idlib is launched or incidents such as using chemical weapons take place in Idlib, the diplomatic process would be affected," Yalınkılıçlı added. The Astana peace process was launched by Russia, Iran, and Turkey in January 2017 with the aim of bringing all warring parties in the Syrian conflict to the table to facilitate U.N. sponsored peace talks in Geneva. The Astana process has been significant because unlike its predecessor meetings, excluding terrorist groups, armed opposition groups were invited to the meetings in addition to the political opposition.

The Astana process resulted with an agreement of the three guarantor countries on signing a memorandum on May 2017 to implement four "de-escalation" zones in Idlib, north of the central city of Homs, the Eastern Ghouta area outside Damascus, and in the southern provinces of Daraa and Quneitra. It also envisaged to create corridors for humanitarian access and established no-fly zones for military aircraft in those areas. Accordingly, Turkey established 12 checkpoints to monitor the cease-fire agreement in the de-escalation areas and to deliver humanitarian aid.

The cease-fire, however, has recently come to an end as the regime forces backed by Russia and Iran re-conquered three of the zones through heavy bombardment. Idlib remains as the last stronghold of the opposition until recently.

Stressing that Turkey, Russia and Iran have different perspectives regarding the Syrian conflict since the beginning of the war, Hasan Basri Yalçın from Foundation for Political, Economic and Social Research (SETA) stated that despite this reality they have been exerting effort to reach a resolution in the crisis.

He underlined that "as long as the war continues, the talks will be held as well. The name might be Astana or something else, but the dialogue will be continuing."

"In Idlib there are high number of civilians and armed groups as well. It will not be possible for Russia to enter the region and clear the terrorists in a couple of days. During the process of a possible operation the diplomatic table might be having a very different shape," Yalçın stressed.

Within the framework of Astana peace talks, three summits at a presidential level were held. The first of the trilateral summits was held last year in Russia's Black Sea city of Sochi and the second meeting was held in Ankara this year in April. The meetings focused mainly on forming a constitutional committee for a new constitution of Syria, paving the way for a resolution of the crisis. The last meeting between the three countries was convened in Iranian capital of Tehran on Sept. 7, highlighting the call for all parties in Syria to lay down their arms.

"I believe that despite the differences with Russia, Turkey will not end dialogue with the country. Russia would also like to continue the negotiations," he underscored. Commenting on the recent summit, Mesut Hakkı Caşın, a professor and head of the International Relations Department at İstinye University, stated, "Turkey has conveyed its voice and concerns in the Tehran summit to prevent a humanitarian crisis."

Meanwhile, Russia and the regime continued their airstrikes on Idlib despite international concerns for civilians. There are various scenarios that might happen in Idlib - in one the terrorists may leave by opening corridors and the other one might result in crisis, Caşın said. He also added that Turkey's concerns that a full-scale operation would lead to a new refugee wave have been shared with Europe as well.