Solution in occupied Karabakh a must to normalize ties with Armenia, Erdoğan says 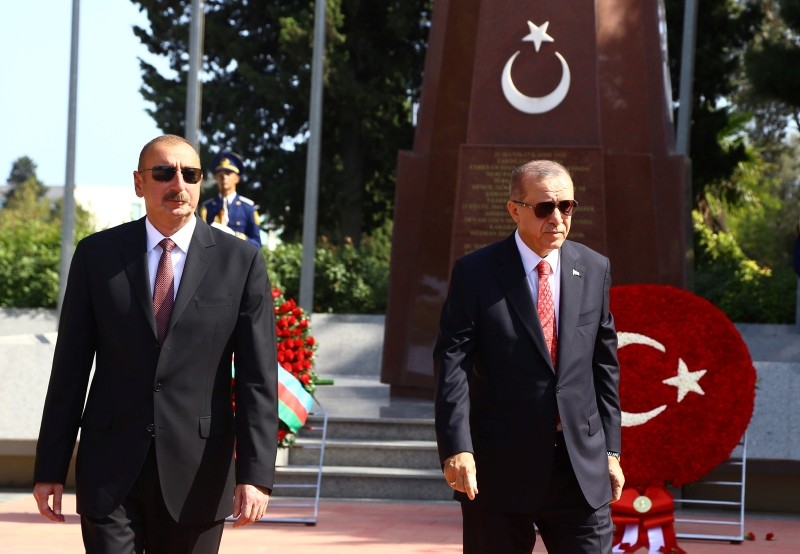 Addressing top Azerbaijani officials including his Azerbaijani counterpart Ilham Aliyev and other attendees of a ceremony held for the 100th anniversary of the liberation of Baku in Azatliq Square, Erdoğan said: "We want good relations with our neighbors but solving the Karabakh problem is the absolute precondition for Turkey to improve ties with Armenia."

The president added that it is pointless for Armenia to expect Turkey to open its borders while it continues to occupy 20 percent of Azerbaijan's lands and prevent more than 1 million Azerbaijanis to return to their homeland.

"Those who cannot explain what happened in Khojaly 26 years ago, the massacre in Upper Karabakh, and declare the killers heroes, should not give Turkey any kind of history lesson," Erdoğan said, referring to genocide allegations over World War I killings of Ottoman Armenians.

The Khojaly Massacre is regarded as one of the bloodiest and most controversial incidents of the war between Armenia and Azerbaijan for control of the now-occupied Nagorno-Karabakh region between 1988 and 1994.

On the heels of the Soviet Union's dissolution, Armenian forces took over the town of Khojaly in Karabakh on Feb. 26, 1992, after battering it with heavy artillery and tanks, assisted by an infantry regiment.

The two-hour offensive killed 613 Azerbaijani citizens, including 116 women and 63 children, and critically injured 487 others, according to Azerbaijani figures. Also, 150 of the 1,275 Azerbaijanis that the Armenians captured during the massacre remain missing.

The conflict over predominantly Armenian Nagorno-Karabakh displaced hundreds of Azerbaijanis as the Armenian occupation extended far beyond the borders of the de jure autonomous region, which has declared independence as the Republic of Artsakh and only recognized by Armenia.

Ankara and Yerevan did not establish formal diplomatic ties after Armenia declared independence in 1991 and in 1993, Turkey closed its border with Armenia in response to the Armenian aggression in Karabakh.

Erdoğan visited Azerbaijan to attend ceremonies marking the 100th anniversary of the liberation of Baku by the Caucasian Islamic Army, comprised of Azerbaijani and Turkish soldiers.

He then held a bilateral meeting meeting with Aliyev at the Youth Palace.

The two presidents later visited the Baku State Cemetery, where the tombs of Azerbaijan's founding President Heydar Aliyev and the January 20, 1990 massacre victims are located.

Erdoğan and Aliyev also visited the Turkish Cemetery of Baku, where the fallen soldiers of the Caucasian Islamic Army during its 1918 campaign were laid to rest.

The campaign was launched by the Ottoman Empire to support the short-lived Azerbaijan Democratic Republic, established in May 1918 after the collapse of the Russian Empire, to liberate the city from Bolshevik and Armenian revolutionary Dashnak fighters. Baku was liberated in September 1918, but Turkish troops had to retreat and transfer the city to the British in November 1918 due to Ottoman defeat in the WWI.