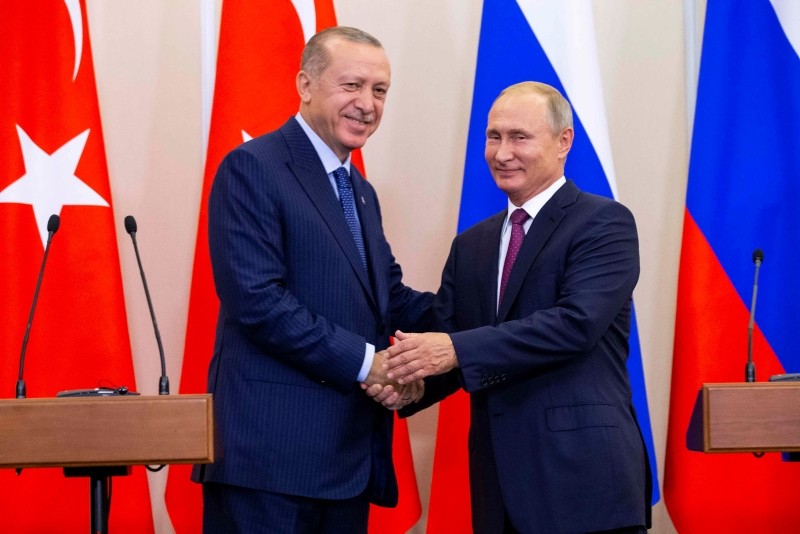 President Recep Tayyip Erdoğan and his Russian counterpart Vladimir Putin said on Monday they had agreed to create a demilitarized buffer zone in Syria's Idlib province to separate Syrian regime troops from opposition forces, with Turkish and Russian soldiers patrolling the zone to ensure it is respected.

Putin, speaking after talks with Erdoğan at his presidential residence in the coastal city of Sochi, said the agreement was that all heavy weapons be withdrawn from the zone, and that "radically-minded" groups, including the Nusra front, would have to pull out of the zone.

Putin said all heavy weapons had to be withdrawn from the zone by Oct. 10, according to Erdoğan's proposal. This includes tanks, rocket launchers, guns and mortars of all opposition groups.

The demilitarized zone, which will be 15-20 kilometers wide, will come into force by Oct. 15, Putin told reporters.

Following the meeting, Ankara and Moscow signed a memorandum of understanding calling for the stabilization of the situation in Idlib's de-escalation zone, in which acts of aggression are prohibited.

"I believe that with this memorandum, we have prevented a great humanitarian crisis in Idlib," Erdoğan said.

"The opposition will remain in areas in which they are already present. We will ensure that radical groups will not operate in the area," he said.

He aso said Russia will take necessary measures to protect the de-escalation zone in Idlib.

"Russia and Turkey reaffirmed their determination to fight terrorism in Syria in all its forms. [...] The practical implementation of the planned steps will give an additional impetus to the process of a political settlement of the Syrian conflict, will accelerate work on the Geneva platform and will contribute to the return of peace to the Syrian land," Putin added.

The announcement came after the two leaders held a bilateral meeting, which was closed to the media and lasted around an hour and 50 minutes.

Putin told Erdoğan in opening remarks carried by Russian news agencies that they will be "looking for solutions where there are none right now," without mentioning Idlib by name.

"I believe our joint statement following this meeting will give the region a new hope," Erdoğan said.

"At the moment, I believe, not only our region but also the world is looking at Sochi today," he added.

Erdoğan on Monday was meeting Putin for the second time in just 10 days after Russia and Iran expressed support for the idea of an offensive on Idlib.

Russia calls Idlib a hotbed of terrorism and says the Syrian regime has the right to retake control of it. Turkey has appealed to Russia and Iran for a diplomatic resolution to the ticking bomb. At the same time, it has sent reinforcements to its troops ringing Idlib, a move designed to ward off a ground assault, at least for now.

Erdoğan and Putin also discussed relations between Turkey and Russia, economy and energy issues, as well as regional and international issues.

Putin said at the meeting that Turkey-Russia relations "are developing positively."

"In terms of trade, it's growing intensely. Our relations are also improving in terms of regional security," Putin added.