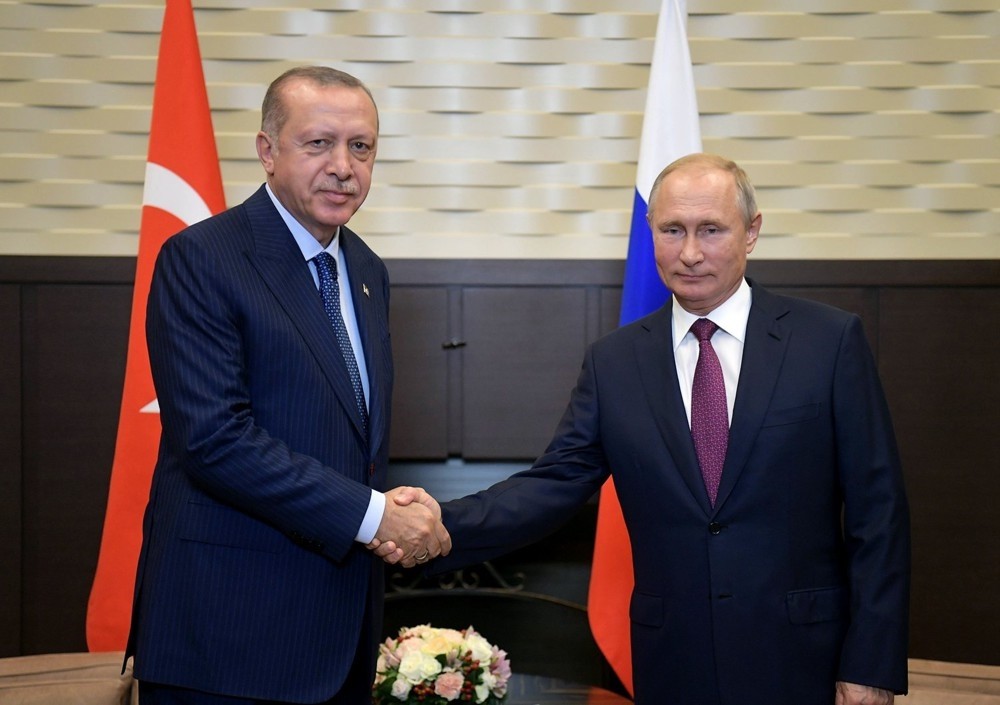 The leaders of the two countries agreed that both the opposition groups and heavy weapons will be cleared from a 15-to-20-kilometer-wide area in Idlib, which is expected to be demilitarized as of Oct. 15

President Recep Tayyip Erdoğan and Russian President Vladimir Putin announced yesterday, following their meeting in Sochi, that they have agreed on establishing a 15-to-20-kilometer-wide demilitarized zone in the opposition enclave of Idlib, Syria, which will be patrolled by Turkish and Russian forces, as of Oct. 15. "By Oct.15, we will establish a demilitarized zone in Idlib in an area that is 15 to 20 kilometers wide. The armed opposition groups, including the Nusra Front [Hayat Tahrir al-Sham] will retreat from the region, as well as the heavy weapons," Putin said during a joint press conference following the meeting, adding that there will also be a joint monitoring mechanism comprising of Russian and Turkish soldiers. Erdoğan also confirmed the decision on establishing the demilitarized zone between the opposition and the regime forces. 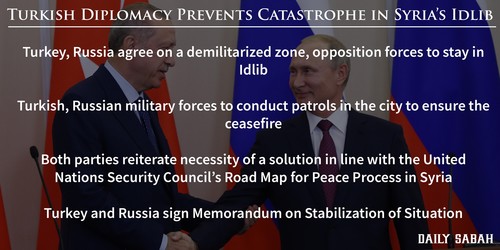 "Today, Russia and Turkey confirmed their determination to continue their fight against terrorism in Syria. The decisions that we have taken will contribute to the fastening of the solution process in Syria as well as providing peace in the region. We will also be in touch with the Syrian regime," Putin further said, underlining that this approach is also being supported by the Assad regime. The bilateral meeting, which was closed to the media, started at 2:50 pm local time and lasted approximately two hours. The meeting in Sochi was the second meeting between the two leaders in less than a month. Erdoğan and Putin also met during the trilateral summit in Tehran on Sept. 14, which was hosted by Iranian President Hassan Rouhani.

"The moderate opposition will remain in areas that are under their control," Erdoğan added. He also underlined the threat that the PKK terrorist group's Syrian affiliate, the People's Protection Units (YPG), poses to the country.

Erdoğan further underlined that Turkey and Russia have come a long way to overcome some of the disagreements and concerns over the recent developments in Idlib.

Ahead of the meeting, Erdoğan said the meeting in Sochi is being considered a "hope for the region" by the international community. "I believe that not only the region but the whole world is following the Sochi [meeting]," the Turkish president said.

Assad has been supported militarily by Russia and Iran. Turkey, on the other hand, supports the moderate opposition in the war-torn country.

According to pundits and news reports, in the case of a full-scale military operation by Assad, Iran would be supporting the regime forces on the ground, while Russia would provide support from the air.

Iranian Foreign Ministry spokesperson Behram Kasımi, however, said yesterday that the country will not participate in any military operations in Idlib.

"The presence of Iran in Syria is mainly for consultancy purposes, and the country will not participate in any upcoming operation," Kasımi said during a press conference in Tehran.

"Idlib is the only region left with a terrorist presence in Syria. We would like this country to clear the terrorists out," Kasımi added, while indicating that Iran insists on a solution that will not harm the civilians in the region and is in contact with Turkey, Russia and Syria about the matter. The Turkish president was accompanied by Turk

Turkey has argued that a military operation would lead to further instability in the country and that a large-scale refugee wave would also move toward Turkey in the north. Ankara has said the country already hosts more than 3.5 million refugees and has no more room for a new influx of refugees.

U.N. officials have said that nearly 40,000 people have already fled Idlib amid recent bombings by Assad forces and Russian airstrikes on the region, and added the number could reach to nearly a million if a full-scale military offensive targets the province.

Idlib, a province now hosting nearly 3.5 million people, was originally home to about 750,000 people. Over the past three years, thousands have been evacuated

from different parts of Syria to Idlib, under agreements with the regime, as it was deemed a safe zone.

Assad and its backing allies say Idlib, the last bastion of the moderate opposition, is home to terrorist groups, such as the al-Qaida linked Hay'at Tahrir as-Sham (HTS). However, Turkey says the fight against terrorism should not mean launching an operation that would harm civilians in the province and that the moderate opposition should be utilized to kick-out the designated terrorist groups from the region. Turkey also has troops in Idlib in areas designated as de-escalation zones.

Turkey, Russia and Iran in January 2017 launched what has come to be known as the Astana process, with the aim of bringing all warring parties in the Syrian conflict to the table, a move seen complimentary to the U.N. brokered peace talks in Geneva. The Astana process has been significant because unlike its predecessor meetings, armed opposition groups were invited to the meetings in addition to the political opposition, excluding groups deemed as terrorists. The Astana process resulted in an agreement of the three guarantor countries signing a memorandum on May 2017 to implement four "de-escalation" zones in Idlib, north of the central city of Homs, the Eastern Ghouta area outside Damascus and in the southern provinces of Daraa and Quneitra. It also envisaged creating corridors for humanitarian access and established no-fly zones for military aircraft in those areas. Accordingly, Turkey established 12 checkpoints to monitor the cease-fire agreement in the de-escalation areas and to deliver humanitarian aid. The cease-fire, however, has recently come to an end as the regime forces backed by Russia and Iran have carried out heavy bombardment since Sept. 8.