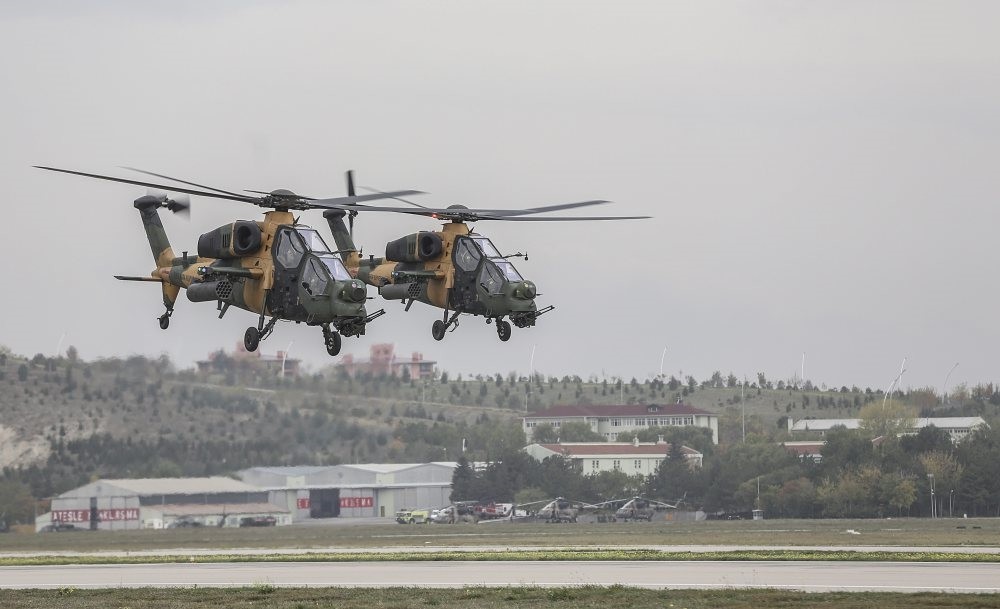 In July this year, Turkey and Pakistan finalized a deal for Pakistanu2019s purchase of 30 T129 ATAK helicopters u2013 the biggest single export deal by Turkeyu2019s defense industry.
by Özgenur Sevinç Sep 18, 2018 12:00 am

Experience sharing as part of defense cooperation between Turkey and Pakistan, including the sale of Turkish-developed helicopters and corvettes, is expected to gain momentum in the upcoming period, the Pakistani envoy said

Pakistan's Ambassador to Ankara Muhammad Syrus Sajjad Qazi welcomed strong bilateral ties between Turkey and Pakistan and highlighted that cooperation, particularly in the field of defense, has been increasing in recent years.

"Both Pakistan and Turkey have strong defense industries and capabilities, allowing the two countries to benefit from one another's experience and expertise. Several landmark defense deals have been signed between the two sides in the recent years, including the planned acquisition of T129 ATAK helicopters. We continue to work closely with our Turkish counterparts on all these projects," Qazi told Daily Sabah in an exclusive interview.

As the cooperation between Islamabad and Ankara has been increasing in the field of defense, Pakistan is set to receive 30 T129 Advanced Attack and Tactical Reconnaissance Helicopters (ATAK) helicopters from Turkey, which is expected to bring a new momentum to military ties.

Undersecretariat of Defense Industries (SSB) previously announced on July 13 that Turkey and Pakistan have finalized a deal for Pakistan's purchase of the T129 ATAK.

Developed from the combat-proven AgustaWestland A129CBT, the new aircraft incorporates a new system philosophy with a new engine - the LHTEC CTS 800-4A - new avionics, sight systems and weapons, modified airframe, an uprated drive train and a new tail rotor.

The Pakistani envoy underscored that in the field of defense the two countries will continue to explore new horizons.

"Under the High Level Military Dialogue Group (HLMDG), the two countries are cooperating in the defense sector. In addition to our collaboration with respect to benefiting from one another's defense technologies, Pakistan and Turkey also have a number of ongoing bilateral military training programs, which are contributing substantially to the capacity building of our armed forces," he added.

Moreover, Turkey won a multibillion tender to supply four corvettes to the Pakistani Navy in July. In May 2017, Turkey and Pakistani defense companies had signed a goodwill agreement for the construction of four Turkish Ada class MİLGEM (National Ship) corvettes in the Karachi Shipyard. According to the final agreement, two ships will be built in Istanbul and two others in Karachi. Two of the corvettes will join the inventory of the Pakistan Naval Forces in 2023 and the remaining two in 2024.

The first ship will be constructed in 54 months and the remaining ships will be built in 60, 66 and 72 months, respectively. The corvettes, which can cruise uninterrupted for 15 days, will be 99.56 meters long and 14.42 meters wide with a maximum speed of 26 knots. The deal also includes the sharing of engineering information and training engineers. Commenting on the recent visit of Foreign Minister Mevlüt Çavuşoğlu to Pakistan on Sept. 13-14 upon the invitation of Foreign Minister Shah Mahmood Qureshi, the ambassador stated that the traditionally close ties between the two countries were reaffirmed during this visit.

Touching on the economic ties between Pakistan and Turkey, Qazi underlined, "An early signing of the Pakistan-Turkey Free Trade Agreement (FTA), in my opinion, will help boost trade ties between the two sides. The two sides have expressed their strong political commitment to the early finalization of the FTA at the highest level."

"The FTA would surely lead to a win-win situation for both countries," he added.

Encouraging Turkish investors for rich opportunities on offer in Pakistan, the ambassador said, "Pakistan is a market of more than 210 million people, richly endowed with human resource capital comprising a youthful, educated and skilled workforce, untapped natural resources and an investment friendly policy. Turkish investors are already benefitting from this investment-friendly environment, and have invested over $2 billion in Pakistan, especially in the energy, finance, and infrastructure sectors." The ambassador emphasized that Pakistan and Turkey have enjoyed an ideal and consistently strong relationship since the establishment of diplomatic ties and the ties are expected to be further enhanced. As a new government is formed in Pakistan, "these ties will continue to grow ever stronger," Qazi underlined.