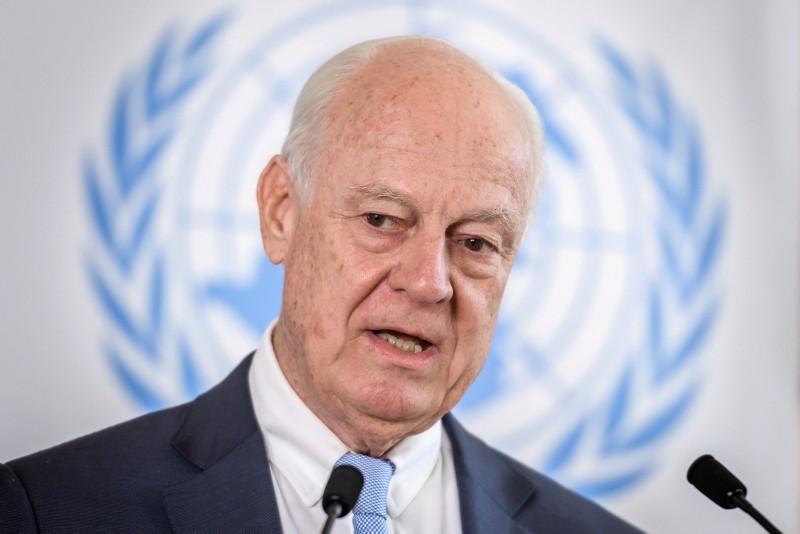 A U.N. representative for Syria on Tuesday praised the agreement reached between Russia and Turkey that has averted what officials had warned could have been the worst humanitarian catastrophe of the 21st century.

"We hope that this agreement is expeditiously implemented," Steffan de Mistura, the U.N.'s special envoy for Syria, told the Security Council.

The Turkish and Russian leaders agreed Monday to establish a demilitarized zone in Idlib, Syria's last opposition stronghold, during a bilateral meeting in Sochi, Russia.

According to the understanding, opposition groups in Idlib will remain in areas in which they are already present, while Russia and Turkey will conduct joint patrols in the area with a view to preventing renewed fighting.

De Mistura urged all parties to the Syrian conflict "to refrain from military actions" that could derail the agreement.

Also addressing the Security Council, U.N. humanitarian chief Mark Lowcock asked whether the agreement reached in Sochi is going to bring a durable peace to Idlib and its inhabitants.

"What do we think the 3 million civilians, including those million children kettled there, make of yesterday's agreement?" he asked.

"Well, they have a simple question. Is this merely a stay of execution? Or is it the beginning of a reprieve, the first tiny glint of light at the very end of the darkest tunnel?"

Meanwhile, the U.S. stressed that it would not contribute to reconstruction efforts in Syria with U.S. Special Envoy James Jeffrey telling the council the Assad regime "will get no help to rebuild, certainly not from us."

"I can't imagine that any other government would want to explain to its people why they would send aid to the barbaric Assad regime," he said.

Jeffrey called for all involved in the Syria conflict "to commit to a lasting cease-fire and to take immediate steps to advance the Geneva peace process further."

Turkey's ambassador to the United Nations said the Idlib agreement would buttress efforts to reach an end to the conflict.

"This Summit was an expression of their determination to find a peaceful solution to address a major humanitarian disaster in Idlib," Feridun Sinirlioglu told the Council. "This arrangement will not only prevent a military attack to Idlib, but also serve the ultimate goal of accelerating the political process and finding a negotiated solution in Syria.

"Idlib is the last exit before the toll. If the international community fails to take action now, not only innocent civilians, but the entire world will stand to pay the price," he added.