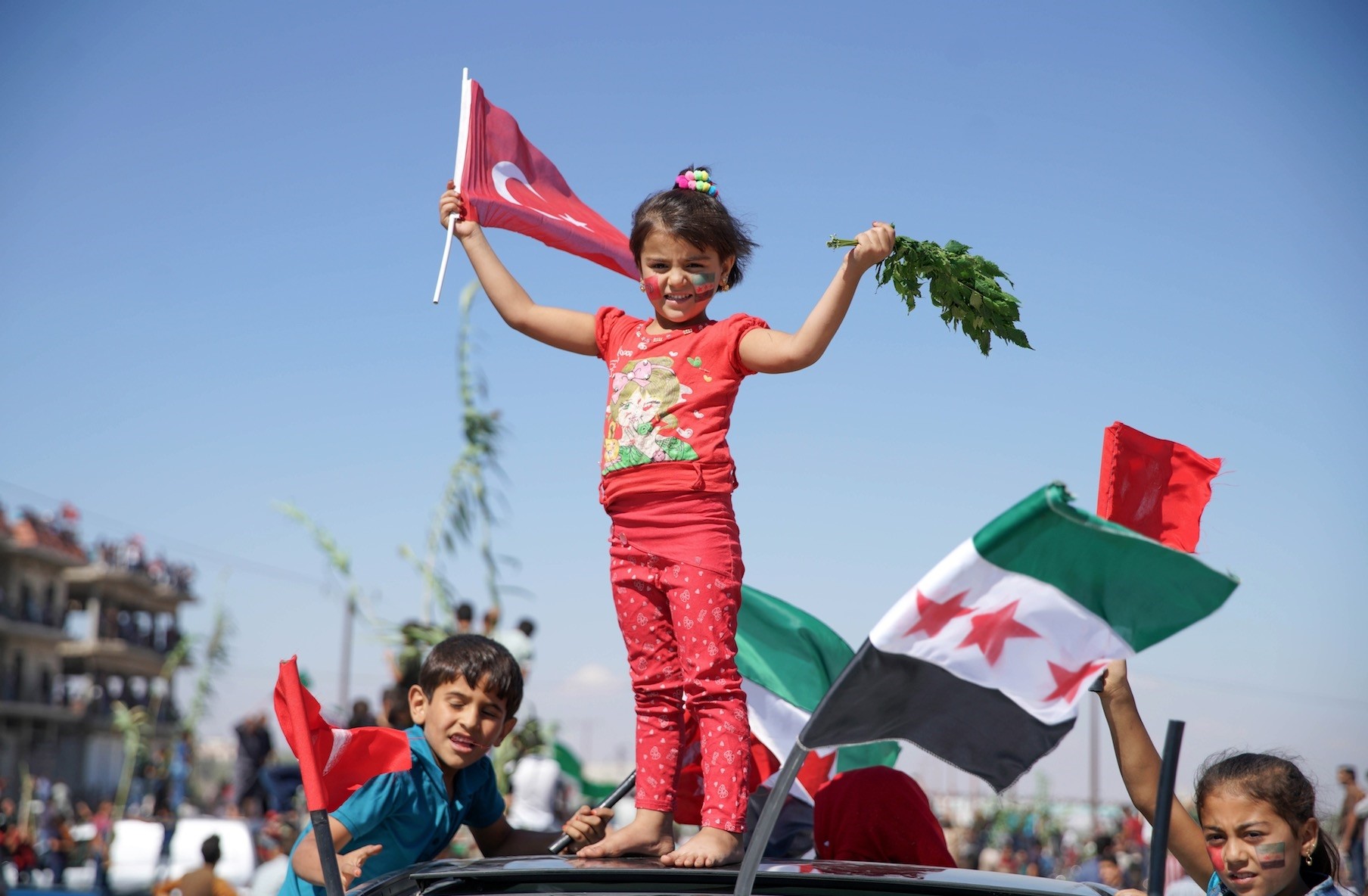 Turkey did not let the calls for help from the millions of civilians in Idlib, who have been facing a dire threat by the Assad regime, fall on deaf ears. People in the Syrian opposition's last bastion can breathe a sigh of relief after Ankara's long series of diplomatic efforts for the region's safety proved a success. The memorandum of understanding that President Recep Tayyip Erdoğan and his Russian counterpart Vladimir Putin signed on Monday in Sochi, Russia was seen by experts as a significant step taken against a humanitarian catastrophe in the region where a 15-to-20-kilometer-wide demilitarized zone will be established.

Experts said that Russia paid heed to Turkey's humanitarian concerns following the latter's intense diplomatic efforts and Moscow has given a chance to Turkey's plan in Idlib which aims to prevent civilian casualties.

"The agreement shows that Russia has taken Turkey's humanitarian concerns into consideration. The agreement can be considered as a success for now, as it appears to have prevented a humanitarian crisis and a refugee flux," Oytun Orhan, an expert on Syria, said.

Speaking at a joint press conference with Putin, Erdoğan said on Monday, "Following our discussions, we agreed to create a demilitarized zone between the opposition and the regime-controlled areas. The opposition will remain in the areas they are currently in. In return, we will ensure that the radical groups, which we will determine with Russia, will not operate in the area in question."

Erdoğan also added "I believe that with this agreement, we have prevented a great humanitarian crisis in Idlib."

Murat Yeşiltaş, an academic at Ankara Social Sciences University, stressed that, "the meeting in Sochi was undoubtedly a diplomatic win-win for the two countries."

"Russia knew that a full-scale operation in Idlib would bear heavy costs for itself, it also did not want to lose Turkey from its side. Moscow and Ankara have seen that their consensus on Idlib has been working. Right now with the agreement a temporary solution is provided. The two sides need to work on implementing the deal to reach a permanent resolution," Yeşiltaş highlighted.

According to the agreement Russia and Turkey will conduct coordinated patrols on both sides of the borders of the demilitarized zone, which are to be determined. Turkey will also fortify its observation posts that are still in Idlib's de-escalation zone. As part of the efforts to limit the violence in the country, Turkey, Russian and Iran had initiated a process to establish so-called de-escalation zones across Syria, including in the northern province of Idlib and parts of neighboring Latakia, Hama and Aleppo.

Under the Astana agreement, Turkey established 12 observation points from Idlib's north to south, aiming to monitor and sustain the current cease-fire agreement for the de-escalation zones, deliver humanitarian aid and ensure the secure return of displaced people. The three leaders of the three guarantors of Astana held a trilateral summit to reach a resolution. The last one of these was held in Tehran. During the summit Erdoğan called on Russia and Iran to avoid steps that would endanger the lives of civilians.

"Previously, the divisions between Turkey and Russia regarding the Idlib issue was exposed which raised concerns that the Astana process might be undermined. Yet, the agreement in Sochi indicated that Ankara and Moscow will continue to work together," Orhan said. He highlighted "Turkey will increase its military presence in Idlib as it will be involved in patrolling activities in the region along with Russia. This would be a deterring factor for possible attacks from the regime."

The agreement reached with Russia saddles Turkey with the task of persuading opposition groups to lay down their heavy arms.

With the aim of providing safe areas for civilians, Turkey, as a neighbor of war-torn Syria, has been calling for the establishment of a buffer zone along the border since the first years of the civil war. Erdoğan has insisted that a buffer zone or a no-fly zone would facilitate the provision of security to many Syrians. During the first years of the war, Ankara repeatedly stressed that forming safe zones was necessary as "people who have been displaced can be placed in the safe areas." Yet, despite Ankara's suggestions, no action was taken regarding the issue.

MODERATE OPPOSITION WILL REMAIN IN IDLIB

Ankara has been stressing that moderate opposition groups and civilians should stay in their places while terrorist groups should leave the region. In a press conference yesterday with his Jordanian counterpart Ayman Safadi, Foreign Minister Mevlüt Çavuşoğlu said, "The borders of Idlib will be protected under the memorandum of understanding signed in Sochi. There would be no change in the status of Idlib." He stressed that heavy weapons will be removed from the demilitarized zone in Idlib by Oct. 15. The minister also said two main highways in Syria will be reopened for traffic by the end of 2018.

Commenting on the agreement, Safadi expressed his satisfaction by saying that it is a significant step taken toward the political solution. Reminding the media that Turkey and Jordan are the countries where the most refugees are welcomed, Safadi highlighted the importance to end the crisis.

In relation to the planned steps of the agreement, Yeşiltaş said, "There are two scenarios regarding the situation in Idlib. The first one is that radical groups would leave the region laying down their arms. It is difficult to guess whether this will happen since there is some rhetoric coming from these groups against Turkey while there is some unraveling as well."

Yeşiltaş added, "The second scenario is that they will be made to lay down arms by force if they reject it in the first place." He underlined that now it is important for the two actors to implement the agreement and focus on the Geneva process.

The defense minister also said yesterday that the Sochi agreement with Russia was an important achievement for both countries involved and the people of the region. He also added that Turkey will continue its military activities in Idlib in coordination with Russia.

The agreement between Ankara and Moscow was welcomed internationally. "We welcome all steps towards avoiding a humanitarian catastrophe," Germany's Foreign Minister Heiko Maas tweeted yesterday and called for concrete steps toward implementing the agreement.

The agreement is essential for many European countries as they have been fearing a new refugee influx prompted by an offensive in the region, Orhan said.

A possible full-scale attack by regime forces on Idlib with an aim to declare victory to end the Syrian civil war, has been sparking fears that another humanitarian catastrophe might take place. Conveying international concerns about civilians, Turkey reiterated in various diplomatic talks that heavy attacks targeting the region should be avoided.

"The meeting between President Putin and President Erdoğan is very important and hopefully it will have a positive impact on the civilians in Idlib. Civilians in Idlib are in great danger," United Nations Secretary General spokesman Stephane Dujarric said on Monday.

Referring to the agreement between Erdoğan and Putin, Iranian Foreign Minister Mohammad Javad Zarif said yesterday, "Thanks to the meetings and negotiations held in recent weeks, including the meeting of the Russian and Turkish leaders in Sochi, the war in the Syrian province of Idlib was prevented."

Zarif also tweeted: "Intensive responsible diplomacy over the last few weeks, pursued in my visits to Ankara and Damascus, followed by the Iran-Russia-Turkey Summit in Tehran and the meeting is Sochi is succeeding to avert war in Idlib with a firm commitment to fight extremist terror. Diplomacy works."

Turkey and Russia are expected to ramp up efforts to implement the deal reached in Sochi. It is highlighted by experts that the implementation of the deal will also pave way for accelerating the political process for the Syrian conflict.