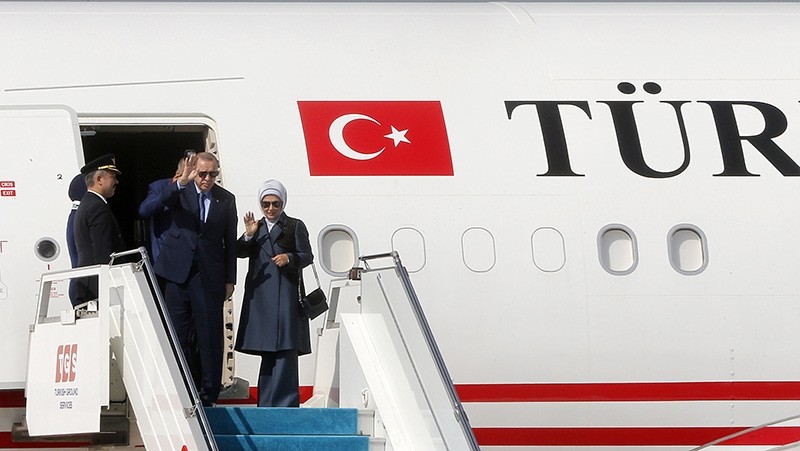 President Recep Tayyip Erdoğan arrived in New York on Sunday to attend the 73rd General Assembly of the United Nations.

The President gave his first speech during the trip at the Turkish American Steering Committee.

"The United Nations Security Council is made up of 5 countries. There have to be at least 20 countries in the Council for better representation of peoples around the world," Erdoğan said, refering to his famous motto "The world is bigger than five."

"We will continue to increase the number of safe zones on our border with Syria including the area east of the Euphrates," he also added regarding Turkey's anti-terror operations in the war-ravaged country. The area Erdoğan was referring to remains under occupation of the PKK's Syrian wing YPG terrorist group the U.S. continues to support.

Also touching upon the Israeli oppression against Palestine, he said that the Muslims should unite in the face of difficulties. "The reason that the conflict in Palestine has not been resolved yet is the fact that Muslims all around the world fail to unite; Al-Quds should not be left to the greedy and racist policies of Israel," he said.

Erdoğan will be in New York from Sept. 23 to 27. He will also participate today in a high-level event on the Global Compact on Refugees. The theme of the U.N. General Assembly for this year's meetings is "Making the United Nations Relevant to All People: Global Leadership and Shared Responsibilities for Peaceful, Equitable and Sustainable Societies." Between Sept. 25 and Oct. 1, the leaders of the member states will give their speeches.

Under the roof of the U.N., which will host more than 140 states and their heads of government during this week, Brazil will be the first country to address the meeting; as the host of the event, U.S. President Donald Trump will be the second head of state to address the assembly.

Erdoğan is also set to deliver a speech tomorrow focusing mainly on the ongoing humanitarian crisis, particularly in Syria's northwestern province of Idlib. Erdoğan is expected to call on the international community to share responsibility in facing challenges posed by the conflicts in the region.

Meanwhile, the Turkey-U.S Business Council (TAİK) will organize the 9th Turkey Investment Conference in New York on Sept. 26, bringing together highly regarded Turkish opinion leaders, senior government officials and corporate executives with institutional investors interested who are interested in better understanding the investment landscape in Turkey. President Erdoğan is also expected to attend the conference and meet with around 400 investors, senior executives of large funds, important players in the financial world and representatives of investment banks.

Prior to his departure for New York, Erdoğan said in a press conference at Istanbul's Atatürk Airport yesterday that he would draw attention to humanitarian crises in his speech at the General Assembly and call for resolution of these problems.

Since relations between Ankara and Washington have been severely strained because of various issues, including U.S. arms support to the PKK's Syrian affiliate, the People's Protection Units (YPG), the U.N. meeting has been drawing attention as the two sides might sit together on the sidelines of the U.N. General Assembly. Answering a question as to whether or not there will be a meeting with U.S. President Trump, Erdoğan said, "If a request comes from the United States, it will be evaluated; however, there is no such thing at the moment."

Ankara has long been calling on the U.S. to end its partnership with the YPG. However, despite Turkey's serious concerns the U.S. has been continuing its arms support to the terror group under the pretext of fighting against Daesh.

Turkey also expects full implementation of the Manbij deal reached with the U.S. In line with the agreement, Turkey demands a complete withdrawal of YPG terrorists from Manbij and its surrounding areas. The deal envisages the deployment of initially separate coordinated patrols and later joint patrols by American and Turkish forces to assure peace in the region. Ankara has been saying that the process has been proceeding slowly.

The U.S.'s apparent reluctance to extradite the leader of the Gülenist Terror Group (FETÖ), Fetullah Gülen, one of the most wanted people in Turkey, also remains a deep rift in relations between the two countries. Ankara formally requested Gülen be extradited on July 19, 2016. Since then however, Turkish officials believe there has been insufficient progress on the matter. FETÖ attempted a coup on July 15, 2016, in Turkey, killing over 250 civilians.

Following his visit to the U.S., Erdoğan is scheduled to pay a key visit to Berlin on Sept. 28-29, which would be his first official visit to Germany since 2014.

The president will meet his German counterpart Frank-Walter Steinmeier and German Chancellor Angela Merkel in Berlin.

During his visit, Erdoğan will attend the inauguration of the Cologne Central Mosque.

More than 3 million people of Turkish origin live in Germany, increasing the importance of bilateral relations for both sides. Many Turks in Germany are second- and third-generation German-born citizens whose Turkish grandparents moved to the country during the 1960s. However, relations have been strained recently, mainly due to Germany's reluctance to take Turkey's concerns over terrorist organizations, particularly the PKK and FETÖ, seriously. Ankara has long accused Berlin of failing to take serious measures against the PKK terror group and its Syrian branch the YPG, which use the country as a platform for their fund-raising, recruitment and propaganda activities. Similar to the PKK, FETÖ is also widely tolerated in Germany - where about 14,000 of its members who fled Turkey following the coup attempt - reside.