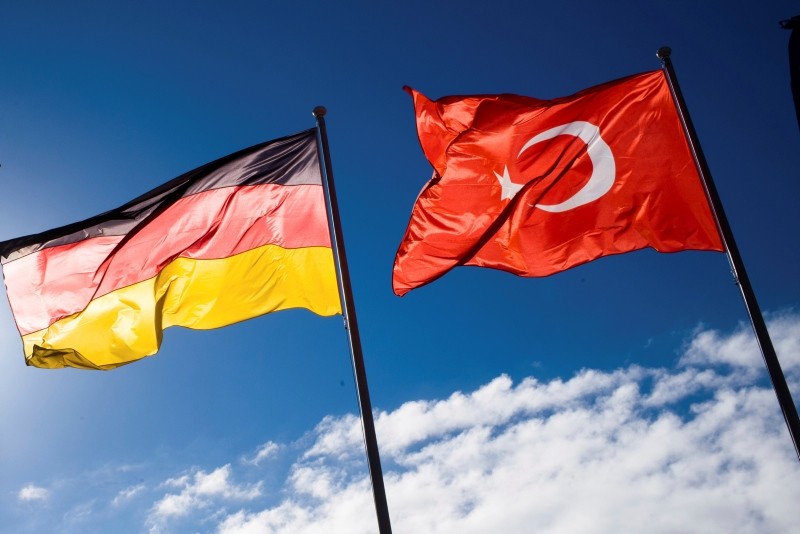 A German and Turkish flag wave at the airport Tegel prior to the arrival of Turkey's President Recep Tayyip Erdogan for an official state visit in Germany at the capital Berlin, Thursday, Sept. 27, 2018. (AP Photo)
by Daily Sabah with Wires Sep 26, 2018 12:00 am

A day ahead of his major diplomatic visit to Germany, President Recep Tayyip Erdoğan on Thursday called on Germany authorities to designate the Gülenist Terror Group (FETÖ) as a terror organization and support Turkey's fight against terrorism, including against the PKK and the Revolutionary People's Liberation Party-Front (DHKP-C).

"It is our responsibility to rationally move our relations forward on the basis of our shared interests, quite apart from irrational fears," Erdoğan wrote in the Frankfurter Allgemeine Zeitung (FAZ) newspaper, in an article titled "Expectations from Germany" and published Friday hours before his arrival at Berlin's Tegel Airport.

"The expectation from Germany is to support Turkey's fight against terrorist groups, such as FETÖ, the PKK and the DHKP-C, which have also threatened internal peace in Germany and targeted German citizens with terror attacks," Erdoğan wrote.

Bilateral relations between the two countries have long been damaged due to disagreements over the activities of the PKK and FETÖ members.

Despite the PKK being listed as a terrorist group by the EU, the activities of its members have been largely tolerated by German authorities, which has encouraged the group to continue its activities in the country and escalate them to the level of violent attacks against Turkish establishments and the Turkish community.

FETÖ, on the other hand, carried out the failed July 15, 2016 coup attempt against the Turkish government in an attempt to take over the state, during which 250 people were killed and more than 2,200 were injured. Since then, a large number of the group's followers have escaped from Turkey to Germany, a place they consider to be a safe haven. In addition, institutions affiliated with FETÖ have been able to continue activities in Germany, despite Ankara's warnings on the shady activities of the group.

Erdoğan's visit is the first formal state visit to Germany, which is home to more than 3 million people of Turkish descent. Relations between the two countries were severely strained after the failed July 15 coup attempt due to disagreements over FETÖ and the PKK, along with rising anti-Turkey rhetoric among German politics, but have since seen a new phase of normalization since early this year.

Both German and Turkish foreign ministers have paid official visits as part of the efforts.

Germany's support for Turkey, particularly after the U.S.' economic steps against Turkey, have also brought ties to a new level. Additionally, officials from both sides have expressed the intention to restore ties and displayed goodwill to further cooperate on several issues.

"Turkey expects Germany to recognize that FETÖ carried out the failed coup, just like the United Kingdom has done. In addition the German authorities' concrete steps, supported by evidence provided by Turkey, against FETÖ activities, members and affiliated organizations and bringing FETÖ to justice, will receive a warm welcome from the Turkish public," Erdoğan said, also underlining the group's shady and secret structural form, including infiltration into state institutions.

Erdoğan added Turkey is determined to stand against all terrorist groups, regardless of their source, religion, ideology or ethnic affiliations.

The president said the successful operations have enabled the Syrians to safely return to their homes in areas liberated from terrorism. He added that PKK followers, also mentioned in German intelligence reports, have continued their illegal activities within German borders, including drug trafficking, the collection of financial resources and recruitment of members.

Erdoğan also said FETÖ and PKK followers have been influencing German public opinion in a manner that has negatively affected bilateral relations between the two countries.