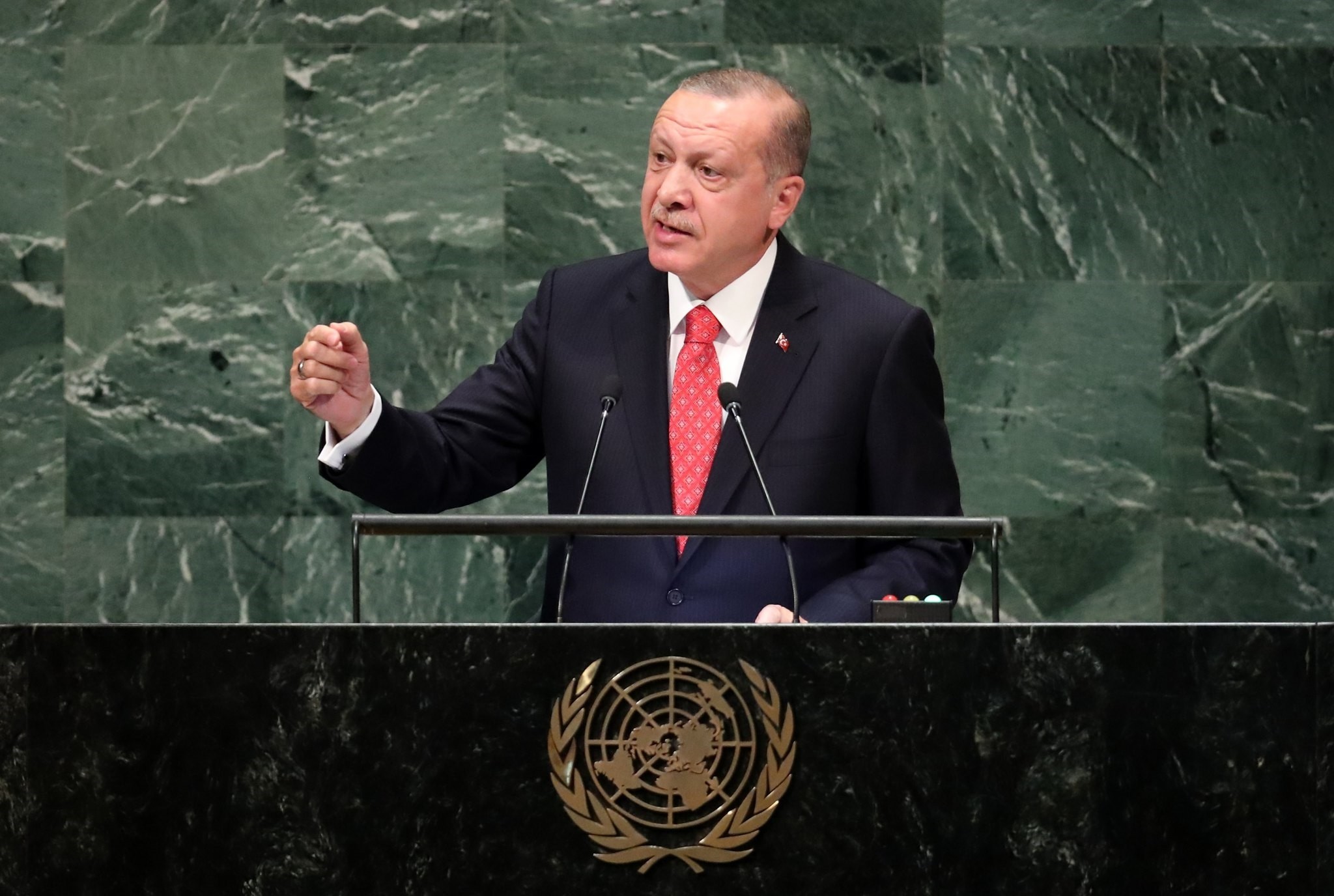 The structure of the United Nations needs reform as it is outdated, unjust and fails to meet the needs of humanity, President Erdoğan said in his address at the U.N. General Assembly

The United Nations, and particularly the Security Council, needs structural reforms to address the current necessities of the world and become a more just body, President Recep Tayyip Erdoğan said yesterday in his speech at the 73rd session of the U.N. General Assembly in New York. The Security Council structure is "serving the interests of five veto-entitled members," while it stands idle to oppression in other parts of the world. In fighting against such an unjust system, Erdoğan said, "Turkey is the voice of the world when it says 'The world is bigger than five,'" reiterating his famous phrase, which refers to the five permanent members of the security council, namely China, France, Russia, the U.K. and the U.S., who hold veto power within the body.

"If the assets of the wealthiest 62 people equal that of half the world's population, then there is a problem," Erdoğan said as he pointed to the inequality in global wealth distribution. The Turkish president underlined that many of the Security Council delayed decisions led to tragedies around the world, including those in Bosnia-Herzegovina and Rwanda. "Let's turn the U.N. into a body that will ensure justice for humanity and become the speaker for humanity's needs in the world," Erdoğan said.

Erdoğan has previously said that major decisions should not be left to the mercy of five members only, but rather, countries should alternate and the number of members sitting at the Security Council should be increased to around 20.Erdoğan also drew attention to the global youth, proposing to establish a U.N. Youth Organization as soon as possible and suggested Istanbul to be the new body's headquarters.

The theme of the General Assembly was "Making the United Nations relevant to all people: global leadership and shared responsibilities for peaceful, equitable and sustainable societies."

Erdoğan was accompanied by a large number of ministers from his Cabinet, other Turkish officials, and members of the business world from Turkey.

Speaking on the Syrian refugee crisis, Erdoğan said that Turkey prevents large refugee influx from spilling to the world and he expects "more abundant, flexible support" from the international community. He reminded that Turkey has spent $32 billion on Syrian refugees so far.

"However, the support that we received from the international organizations is $600 million. The EU, on the other hand, has given approximately 1.7 billion euros so far," the president added. Turkey has been hosting the largest number of Syrian refugees in the world. Since the beginning of the civil war, Turkey has gone to extensive lengths to alleviate the suffering of the refugees by providing shelter, food and medical treatment.

Since Ankara has assumed a gigantic portion of the responsibility of meeting the needs of the Syrian refugees, it has called on the international community to shoulder more responsibility.

Turkey and EU signed an agreement on March 18, 2016, to stem the inflow of refugees to Europe, which is considered unbearable by the EU. Turkey has been the main route for refugees trying to cross into Europe since the beginning of the civil war in Syria. With the agreement, irregular arrivals decreased by 99 percent; thus, it also prevented the loss of many lives on the sea. The deal included a 6 billion euro aid package to help Turkey care for millions of refugees hosted in the country, and the EU promised to initially allocate 3 billion euros in its first tranche for projects to support Syrian refugees.

Erdoğan continued by saying that Turkey has cleared an area in Syria of 4,000 kilometers of Daesh and the PKK terrorist organization's Syrian affiliate People's Protection Units (YPG), turning it into safe and peaceful regions for the Syrians.

The president also mentioned the recent agreement reached on Syria's northwestern Idlib, saying, "Turkey has prevented the Bashar Assad regime's bloody assaults against a de-escalation area in Idlib with the Sochi deal signed with Russia." "Our goal is to clear the Syrian territory, all the way from Manbij to the Iraqi border, from terrorists," Erdoğan said, and called on all parties to support "just and sustainable political solution" in Syria with this constructive approach.

"Those who equip terrorists with tens of thousands of trucks and cargo planes full of arms for the sake of tactical interests will most definitely feel sorrow in the future," Erdoğan said referring the U.S.' support to the YPG under the pretext of fighting against Daesh.

Ankara has long criticized Washington for its support to YPG, as the group is organically linked with the PKK, which is listed as terrorist organization by the U.S., European Union and Turkey.

US, Europe not aware of FETÖ danger yet

Meanwhile, Erdoğan also criticized both the U.S. and European countries for still not realizing how dangerous the Gülenist Terror Group (FETÖ) is.

"Turkey eliminated a majority of FETÖ in the last five years, but the U.S. and European countries have not understood the danger yet," the President said. Erdoğan expressed that the funds FETÖ receives in 27 U.S. states from Washington solely for the charter schools they run is $763 million.

"I invite all countries of the world to be watchful and take action against the FETÖ terrorist group," he underlined.

Turkey has asked several countries to shut down dozens of schools, colleges and businesses linked to the FETÖ network in the wake of the July 15 coup attempt blamed on the terrorist group's infiltrators in the military. It also asked for the U.S. to extradite the terrorist group's leader Fetullah Gülen. However, despite all the evidence Ankara has presented on the crimes of Gülen, Turkish officials believe there was insufficient progress on the matter. FETÖ members enjoyed safe haven in most countries they operated in before the 2016 coup attempt, but Turkey's diplomatic efforts after the putsch bid have paid off with most countries agreeing to cooperate with Ankara in a crackdown on the terrorists.

Turkey to continue to stand for Palestinians

Erdoğan also said that Turkey will continue to stand with the "oppressed Palestinians" and also protect the legal, historical status of Jerusalem.

"Efforts to reduce assistance for Palestine only increase the courage of the oppressors," Erdoğan said. Turkey will continue its struggle against the U.S. and Israeli governments' infraction against the holy city at the "highest-level" of diplomacy, Erdoğan said at another event ahead of the General Assembly on Sunday.

He had also highlighted that the struggle that Turkey has launched with the motto "Jerusalem is our red line," has gained support from other fellow states, achieving remarkable success.

On Dec. 6, 2017, U.S. President Donald Trump announced his decision to recognize Jerusalem as Israel's capital and relocate the U.S. Embassy from Tel Aviv to the holy city.

The shift in the long-standing U.S. policy on Jerusalem sparked angry demonstrations in the occupied Palestinian territories and many Muslim countries.

Following Trump's move, the U.N. voted on a resolution on Dec. 14, 2017 which asserted that "any decisions and actions which purport to have altered, the character, status or demographic composition of the Holy City of Jerusalem [would] have no legal effect, are null and void and must be rescinded in compliance with relevant resolutions of the Security Council."