Turkey sees no place for Assad in Syria's future 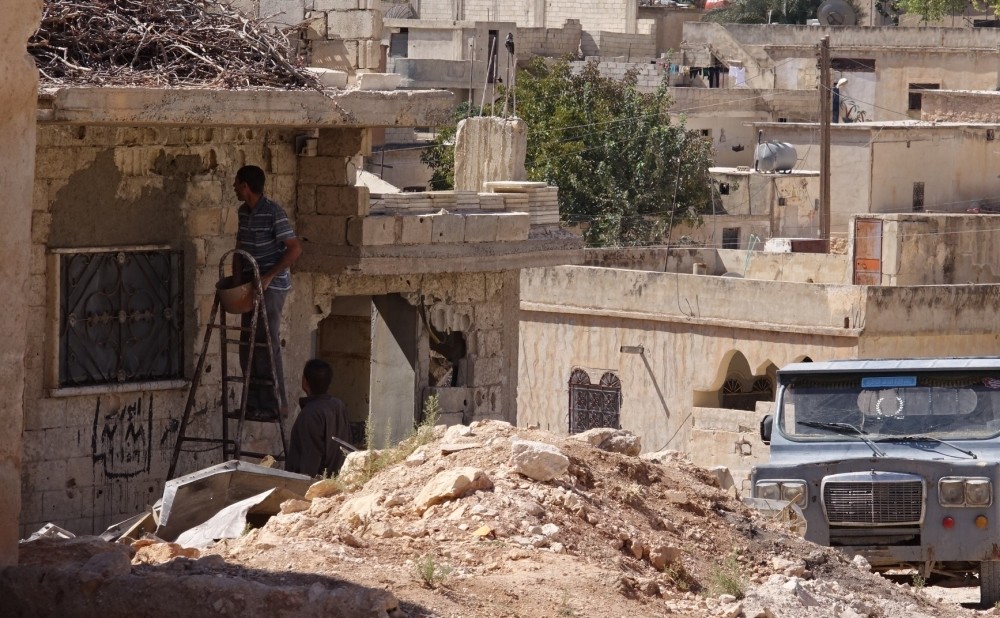 About 50,000 civilians who fled Idlib due to fears of a possible Syrian regime offensive have returned home following the Sochi deal between Turkey and Russia.
by Daily Sabah with AA Sep 27, 2018 12:00 am

Turkey reiterated that Bashar Assad had no place in Syria's future, emphasizing that the removal of certain groups from Idlib had started with the groups withdrawing from the region in accordance with the Sochi agreement

President Recep Tayyip Erdoğan said on Tuesday that it was impossible for Syrian peace efforts to continue with Bashar Assad in power, adding that the withdrawal of "radical groups" had already started with the newly designated demilitarized zone in Syria's northwestern Idlib region. Ankara has long said Assad cannot remain in power if Syria is to have a politically stable future, and that a figure who has killed hundreds of thousands of his citizens should not remain in power. "How could we embrace a future with the president of Syria who killed close to 1 million of his citizens? Once again, I clearly want to say [Assad] is a terrorist who leads state terror. There is no peace in Syria now and won't be with Assad," Erdoğan said in December of last year, at a joint press conference with Tunisian President Beji Caid Essebsi.

In an interview with Reuters while in New York for the U.N. General Assembly the president spoke about the Idlib agreement saying, "This part of Syria will be free of weapons which is the expectation of the people of Idlib ... who welcomed this step."

According to the agreement, the demilitarized zone will be patrolled by Turkish and Russian forces.

Earlier this month, Turkey and Russia reached an agreement in Sochi, which suggested civilians and the moderate opposition will continue to remain in Idlib, however, all terrorist groups will be cleared from the region. The agreement also envisaged that Turkish observation posts will be fortified and continue to function. Located near the Turkish border, the province of Idlib is home to more than 3.5 million Syrians, many of whom fled from other cities following attacks by regime forces.

The civil war in Syria erupted in 2011 when the Assad regime harshly responded to protesters who had poured into the streets to demand more rights and freedom. The protests initially emerged following the Arab Spring demonstrations that resulted in strongmen in Egypt, Tunisia and Libya stepping down. The cruelty against the protesters triggered a rebellion in significant parts of the country, turning into a brutal civil war. To date an estimated 500,000 people have been killed in the war. So far, around 6 million people have been displaced internally and another 5 million were driven abroad as refugees since the beginning of the Syrian civil war, according to U.N. figures.

Meanwhile, about 50,000 civilians, who fled from Idlib due to fears of a possible Syrianregime offensive, have returned to their homes following the Sochi deal between Turkey and Russia, Anadolu Agency (AA) reported yesterday. Local sources reported that the returning civilians had started reconstruction efforts in their hometowns in the designated demilitarized areas of Idlib.

Speaking to AA, Mohamed al-Mohamed, a local from Idlib, said that they had fled from their village after airstrikes, but returned following the Sochi deal. "I am thankful to the Turkish government. This agreement was hope for us as we were weary of moving," he said.

Um Mohamed, a Palestinian living in Idlib, said that they repaired their house which was destroyed in an airstrike and expressed his wish for the permanent end of the regime's air raids.

"We cleared ruins after returning to our village. This is our land. Locals here say that the [Sochi] agreement is a positive development. I hope trust and stability will be provided with the deal," he said.

Abdulkarim Hamsho, a local from Habit village in southern Idlib, said they had escaped from their village after the bombardment started. However, with the new deal they have been able to return back to their village. "We are back and are now rebuilding our houses that were destroyed during the bombings," Hamso said, adding that they are hoping for permanent peace in the region.

Another AA report said also that the regime and Iranian-backed paramilitary groups continue sporadic artillery fire in Idlib, in the outskirts of Latakia, in western Aleppo and northern Hama - despite the Sochi deal. Local sources said that a civilian was killed as result of artillery and opposition fighters responding to the attack.