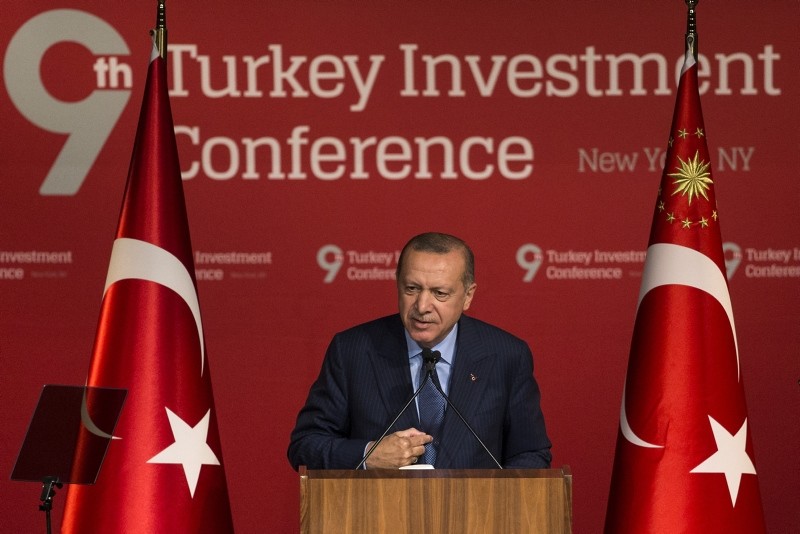 Turkey and the U.S. will overcome the current "turbulent period" in their relations through their strategic partnership, President Recep Tayyip Erdoğan said late Wednesday.

"Our strategic partnership, which has gone through difficulties so many times, will overcome this turbulent period," Erdoğan said during his address at the 9th Turkey Investment Conference held by the Turkey-U.S. Business Council (TAIK) in New York.

Erdoğan said disagreements with the administration of U.S. President Donald Trump on issues such as the Gülenist Terror Group (FETÖ), the fight against terrorism, Jerusalem, Syria and sanctions were "testing" Turkish-American relations.

He said he believes that Turkey and the U.S. need to come a long way in their relations, especially with regards to the FETÖ and the People's Protection Units (YPG) — the terror group which Turkey considers to be the PKK'S Syrian wing but the U.S. still supplies arms to.

Erdoğan said some circles in the Trump administration assume they can resolve differences with Turkey through threats, pressure and blackmail.

He questioned why the U.S. is protecting FETÖ leader Fetullah Gülen, adding: "Are we not strategic partners?"

Erdoğan said FETÖ was active in 27 U.S. states and has charter schools there.

FETÖ and its U.S.-based leader Fetullah Gülen are accused of orchestrating the defeated coup of July 15, 2016 which left 251 people killed and nearly 2,200 injured.

'Investments in US exceed $4.6 billion'

Erdoğan said the bilateral trade volume between Turkey and the U.S. was above $20 billion in 2017. He said Turkey's exports to the U.S. totaled $8.7 billion and imports totaled $12 billion.

"In the last 10 years, these companies have made around $11.3 billion direct investments in our country. As of today, the investments of Turkish companies in the United States have exceeded $4.6 billion. We see that the current investment value of the members of the U.S. Chamber of Commerce exceeds $50 billion," he added.

The president said Turkey views the future of political and economic relations with the U.S. with hope despite Washington imposing sanctions and doubling tariffs on Turkish aluminum and steel imports.

"With these figures, the United States ranks fifth in our exports and fourth in our imports. As seen, the balance of trade between our countries is in the favor of the U.S. and a disadvantage for Turkey. Despite this table, the U.S. administration has introduced additional tariffs and taken protectionist steps against some products originating from Turkey. The fact that the Trump administration wants to reach the political goals by using commercial matters as a tool is one of the obstacles to the progress of our economic cooperation. The doubled tariffs on Turkey's iron and steel, sanctions, investigations and, of course, exchange rate volatilities are some of the steps of the current management aimed at our country. Despite all this, we look at the future of our political and trade relations with the United States with hope," Erdoğan explained.

He said there are no winners in trade wars and each unilateral decision will be met with retaliation.

The row between Turkey and the U.S. escalated when Trump decided to impose sanctions on Turkish ministers Süleyman Soylu and Abdülhamit Gül on Aug. 1 and also increased tariffs on imported steel from Turkey by 50 percent and aluminum by 20 percent, while threatening the country with more sanctions over pastor Andrew Brunson.

"History has shown us clearly that there is no winner in war, especially trade wars. Each decision taken unilaterally will be met with retaliation. This attitude will lead to the loss-loss equation in both the trade and political areas. Whereas, we always stand by the win-win principle. The future of the international trade regime, which was achieved through diplomatic negotiations which lasted for many years, is at stake," the president continued.

"The trade war between the world's three largest economies, namely the U.S., the European Union and China, will not only be limited to these economies, but will affect everyone. As a matter of fact, the negative reflections of this have begun to be felt in many regions, especially in Africa and developing countries."

Erdoğan said Turkey will continue to strengthen the investment environment without compromising on the rules of the free market economy.

"We will continue to make the necessary legal arrangements to attract more direct investments and for international investors to invest safely in our country," he added.

Treasury and Finance Minister Berat Albayrak on Monday also addressed the members of the American business world at the Financial Reforms and the Turkish Economy Conference in New York. During the meeting, Albayrak had said Turkey was in a better position than the other emerging market economies and above the world average in terms of borrowing.

He also emphasized the positive outlook of the Turkish economy based on macroeconomic indicators.

Elaborating on the New Economic Program (NEP) that was announced last week, Albayrak emphasized that they have a strategic, reliable, rational and strong economic program for the first time because all parties, ranging from the finance sector to the academic world, have contributed.

"The transformation targeted with the NEP in the Turkish economy actually started in July," the minister said.