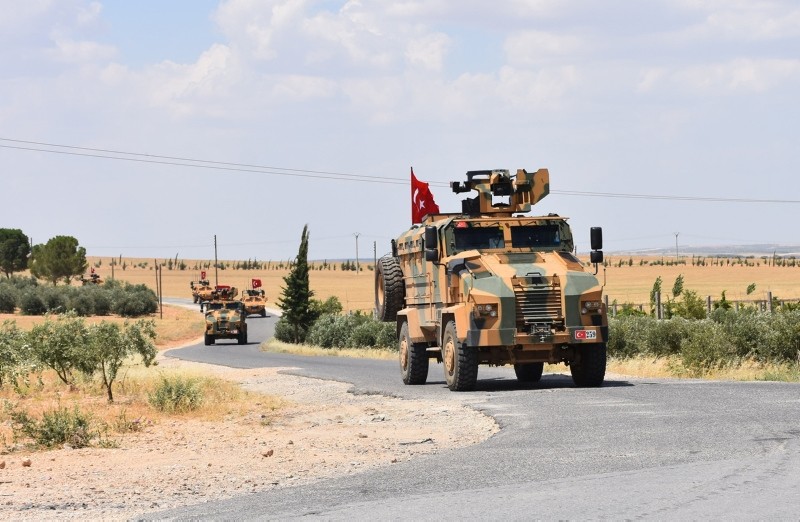 A handout picture released by the Turkish Armed Forces shows Turkish soldiers accompanied by armored vehicles patrolling near the city of Manbij in northern Syria, on June 18, 2018. (AFP Photo)
by Compiled from Wire Services
Oct 01, 2018 12:00 am

As agreed by the two NATO allies in June, Turkish and U.S. forces are currently carrying out patrols in Manbij, but those are independent of each other.

Mattis said that initial instruction for Turkey's military trainers started, and will soon be followed by U.S. training of the broader Turkish force that will conduct the patrols. The forces are being trained in Turkey.

The training had been delayed a bit while equipment was brought in and the two countries worked out the details of how military tactics and operations would be conducted.

Presidential Spokesperson İbrahim Kalın said last week that the patrols would "begin very soon." Mattis would not commit to a timeline, but acknowledged progress in the training steps needed for the patrols to start.

The Manbij patrols are part of a "road map" that Ankara and Washington agreed on in June to defuse tensions amid demands for the withdrawal of the U.S.-backed People's Protection Units (YPG) militia.

"We have every reason to think the joint patrols will be coming on time when the training syllabus is complete," Mattis told reporters traveling with him en route to Paris. "We just got to an agreement last week."

Mattis said the Turkish military has "been very helpful, very professional on setting the rules of engagement and the training up, and we're on the ground there now."

The U.S. and the Turks have been conducting independent patrols along the border there. Creating joint patrols is seen as a way to tamp down potential violence between the various groups in the area.

Manbij has been a major sticking point in the strained relations between the U.S. and Turkey. Ankara considers the Democratic Union Party (PYD)'s armed wing, the U.S.-backed YPG, a terror group that is linked to the PKK — an internationally-recognized terror organization.

In July, the Manbij Military Council, which administers the town, said the YPG units once stationed there had completed their withdrawal. Turkey's Foreign Ministry called reports of the alleged withdrawal "exaggerated" and said they didn't "reflect the truth."

Mattis is expected to meet with senior French leaders on Tuesday then head to Brussels for a meeting later this week of allied defense ministers.

Turkey and Russia agreed in mid-September to enforce a new demilitarized zone in Syria's Idlib province from which extremist groups will be required to withdraw.

Before the deal and when a Syrian regime offensive on Idlib seemed imminent, France had said that it was prepared to carry out strikes on Syrian targets if chemical weapons were used.