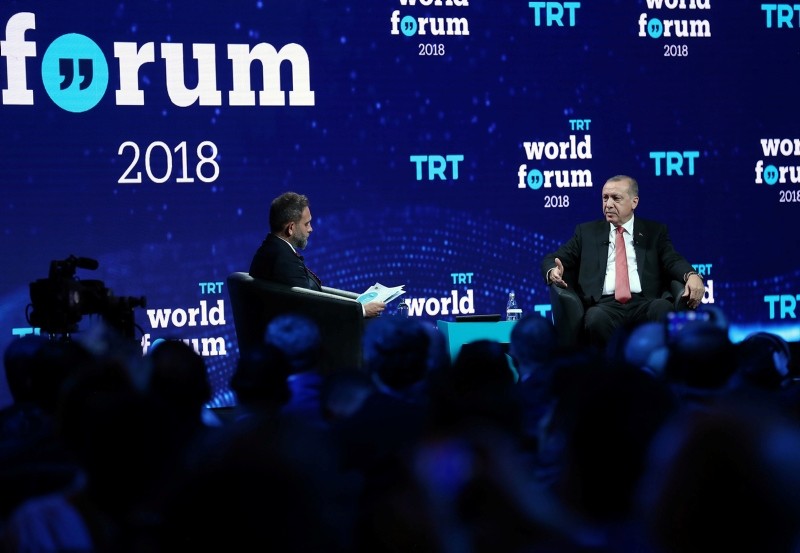 "I'm seeing the signs of the end of the EU. I'm waiting for the process to go faster so that Turkey can determine its way; we have been waiting for membership for decades and there is no result," President Recep Tayyip Erdoğan said late Thursday in TRT World Forum.

The president also suggested a referendum. "If the EU situation continues to go in this direction, we might ask the 80 million people of this country how they wish to proceed with this."

Criticizing the European Union's policies and Turkey's never-ending accession process, Erdoğan said: "Countries that applied at the same time, or after Turkey, have become members of the EU before us. If you are not going to let Turkey in, just let us know so that we don't tire ourselves anymore. Apparently they are not tired of tiring us."

"That's why I'm saying the world is bigger than five," he added, repeating his famous motto.

"Does the UNSC represent the world? No. Do you think all continents are represented? No," Erdoğan said, adding that all seven continents need to be represented at the UNSC table. "We need to establish this in the minds of all the people, because today's world is no longer the post-World War II world," he reiterated.

"The U.N. was established to create peace and harmony, yet unfortunately still cannot find an answer to the issues in our world. The UNSC has passed many resolutions, however, they do not bring about effective outcomes," the president added.

"We saw what happened in Afghanistan, Yemen and other places, not to mention the Cyprus issue which hasn't been resolved since 1974. We also see this in Syria. Have they resolved the issue there? No. Why not? Because the global justice system has collapsed."

Fatih Er, the moderator in the forum, asked the president what Turkey's plans are regarding a possible reform in the U.N.

"You have just arrived from the U.N. General Assembly. There you underlined that the problem is its heart is no longer beating. What kind of action will Turkey take with regard to this?" he asked.

Erdoğan responded with skepticism toward some countries' willingness to put forth the efforts necessary for change.

"We know global powers need to be recognized and the countries of the world who are aware of this are supportive of Turkey's point. Whenever we come together to convene they all confirm our point. But how will we take action?" the president asked.

"This will take a lot of time, effort and diligent work as we take all the necessary steps. We have to look and see how we can take this issue to the level of the five permanent members."

Erdoğan also blasted Israel and its apartheidist and expansionist policies while again criticizing the U.N. structure.

"The U.N. will need to take some steps and pass resolutions for this to become possible. Under the U.N.'s watch, Israel was able to grow while Palestine ceased to exist, and thus only in a world with an understanding of justice can this be resolved," he said.

Turkey and Russia's agreement on Idlib

Erdoğan also touched upon the recent Idlib deal brokered by Turkey and Russia.

"Idlib became a refuge for those fleeing bombardment in Aleppo and other parts of Syria. They went to Idlib, which became a host to over 3.5 million people. As Idlib is at Turkey's border, those fleeing would flee to Turkey, so we took steps to stop the bombardment," he said.

Detailing Turkey's humanitarian efforts, Erdoğan said his country would not close its borders to people in need.

"Even if there were newcomers, we would not have been able to close our borders. Why? Because they are humans. Are we going to watch them die? No. This is a humanitarian issue," he added.

He also criticized the bias regarding types of weaponry in conflicts all around the world, saying many more people have been killed by conventional weapons than by chemical or other banned materials. "(Some countries and the U.N.) are only focusing on chemical weapons, while many, many more people are being killed by conventional weapons every day," Erdoğan added.