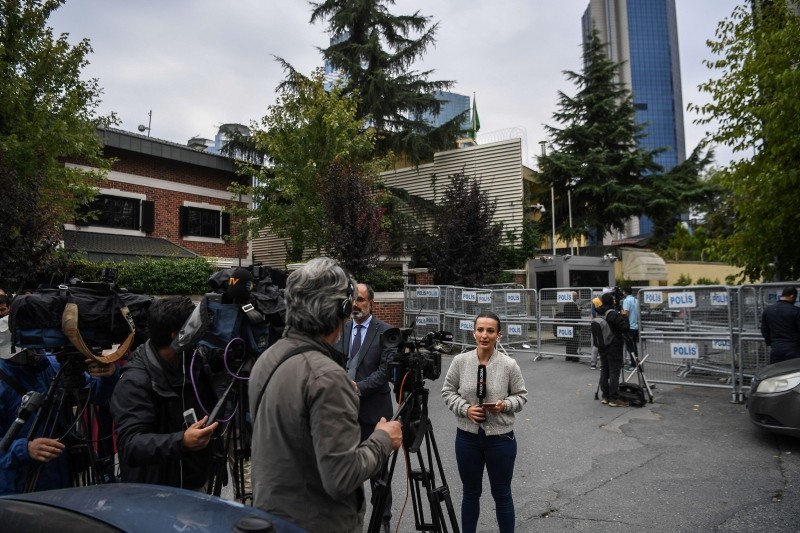 Video journalists broadcast their pieces to camera at barriers in front of Saudi Arabia's consulate in Istanbul on October 4, 2018. (AFP Photo)
by Compiled from Wire Services Oct 04, 2018 12:00 am

Saudi Arabia's ambassador to Turkey was on Thursday summoned to the foreign ministry after a prominent journalist critical of Riyadh went missing.

Ambassador Waleed A. M. Elkhereiji was summoned to the ministry on Wednesday afternoon and met with was asked the whereabouts of Jamal Khashoggi in a meeting with Deputy Foreign Minister Yavuz Selim Kıran, Anadolu Agency reported citing a diplomatic source.

Khashoggi, a contributor to the Washington Post, went to the Saudi consulate on Tuesday to receive an official document for his marriage and has not appeared since then.

His Turkish fiancée reported him missing after the journalist, who has lived in self-imposed exile in the U.S. since last year to avoid possible arrest, was not seen after he entered the consulate on Tuesday afternoon for marriage procedures.

After an initial period of silence Saudi Arabia said the consulate was working with Turkish authorities "to uncover the circumstances of the disappearance of Jamal Khashoggi after he left the consulate building".

Turkish presidential spokesman Ibrahim Kalın, however, told reporters on Wednesday the journalist was being held at the consulate, adding that Ankara was in touch with Saudi officials.

The Post said it was "extremely concerned" about Khashoggi.

"We have reached out to anyone we think might be able to help locate him and assure his safety, including U.S., Turkish and Saudi officials," the Post's editorial page editor Fred Hiatt said in a statement.

The U.S. State Department said it was investigating the matter.

Khashoggi's fiancee told AFP that there had been no news about the journalist. "We don't know where he is. If he had left the consulate as said by the Saudis, we would know where he is," she said.

Khashoggi, 59, is a longtime Saudi journalist, foreign correspondent, editor and columnist whose work has been controversial in the past in the ultraconservative Sunni kingdom. He went into self-imposed exile in the United States following the ascension of Prince Mohammed, now next in line to succeed his father, the 82-year-old King Salman.​

Khashoggi was known for his interviews and travels with Osama bin Laden between 1987 and 1995, including in Afghanistan, where he wrote about the battle against the Soviet occupation. In the early 1990s, he tried to persuade bin Laden to reconcile with the Saudi royal family and return home from his base in Sudan, but the al-Qaida leader refused.

Khashoggi maintained ties with Saudi elites and launched a satellite news channel, Al-Arab, from Bahrain in 2015 with the backing of Saudi billionaire Prince Alwaleed bin Talal. The channel was on air for less than 11 hours before it was shut down. Its billionaire backer was detained in the Ritz Carlton roundup overseen by Prince Mohammed in 2017.

As a contributor to the Post, Khashoggi has written extensively about Saudi Arabia, including criticizing its war in Yemen, its recent diplomatic spat with Canada and its arrest of women's rights activists after the lifting of a ban on women driving.

The dispute over Khashoggi's disappearance also threatens to reopen rifts between Ankara and Riyadh. Turkey has supported Qatar amid a yearlong boycott by Bahrain, Egypt, Saudi Arabia and the United Arab Emirates over a political dispute.

"If, as it claims, Saudi Arabia truly wishes to transition to a more open society, it will have to accept the fundamental rights of freedom of expression and freedom of the press," wrote Ravi R. Prasad, the institute's head of advocacy.

The New York-based Committee to Protect Journalists also expressed concern, saying "given the Saudi authorities' pattern of quietly detaining critical journalists, Khashoggi's failure to emerge from the Saudi consulate on the day he entered is a cause for alarm."