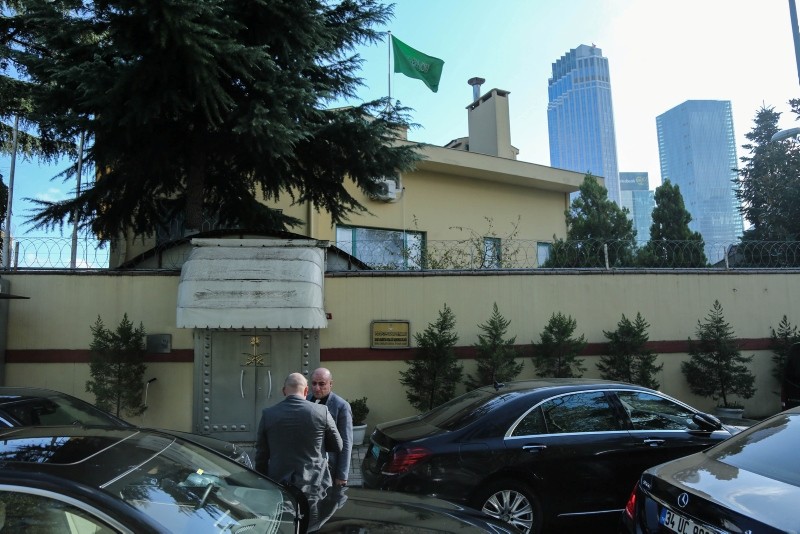 An investigation by Turkish prosecutors is ongoing on the fate of dissident Saudi journalist Khashoggi, who has been missing since Tuesday afternoon after entering the consulate building to get several documents for marriage procedures.

The ambassador met with Deputy Foreign Minister Sedat Önal, who conveyed Turkey's expectation of full cooperation from Saudi authorities in the investigation.

The ambassador was previously summoned to the ministry on Wednesday afternoon and was asked the whereabouts of Khashoggi in a meeting with Deputy Foreign Minister Yavuz Selim Kıran.

Speaking at a joint press conference with Hungarian Prime Minister Viktor Orban in Budapest later in the day, President Recep Tayyip Erdoğan said it was "our humanitarian and political duty to closely monitor the case," adding that security and intelligence officials are looking into the incident. Erdoğan also said prosecutors were checking the arrivals and departures of Saudi nationals at Istanbul's airports.

The president also issued a warning to the Saudi consulate, saying that they cannot save themselves just by saying that Khashoggi left the building, and that they must provide concrete evidence about the whereabouts of the missing journalist and prove that he exited the premises.

"Now when this person enters, whose duty is it to prove that he left or not? It is (the duty) of the consulate officials," he said.

"Don't you have cameras and other things? Why don't you prove it, you have to prove it."

Anadolu Agency has said 15 Saudi nationals arrived in Istanbul on board two planes and were inside the consulate building when Khashoggi disappeared. The private DHA agency said the planes, which it identified as a two Gulfstream jets belonging to a Riyadh-based company that hires private aircraft, landed at Istanbul's Ataturk Airport on the day Khashoggi vanished.

Khashoggi, a contributor to the Washington Post who has lived in self-imposed exile in the U.S. since last year to avoid possible arrest, was reported missing by his Turkish fiancee. His fiancee and friends say that he did not leave the building.

Several Turkish police sources, speaking on the condition of anonymity, have told news agencies that Khashoggi was likely killed inside the building.

Saudi officials reject the accusations and say that Khashoggi left the consulate premises.