Withdrawal of heavy weapons in Idlib complete under Sochi deal 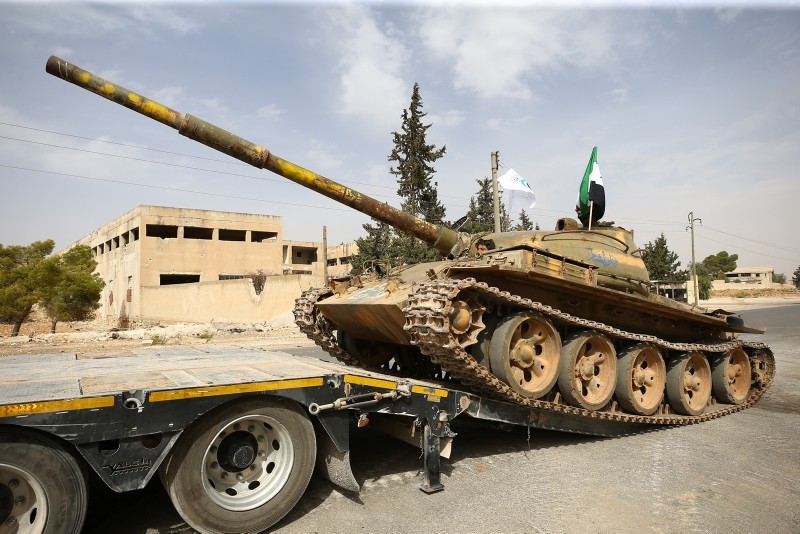 The demilitarization process in Syria's northwestern province of Idlib was completed Monday as part of the Sochi deal recently signed between Turkey and Russia.

Speaking to AA, Turkish authorities monitoring the process as well as opposition sources confirmed the withdrawal.

In addition to the groups linked to the Free Syrian Army (FSA), other armed opposition groups also withdrew their heavy weapons, including Grad rocket launchers, mortars and medium-range missiles.

The Turkish military, on the other hand, began to dispatch various weapons and armored vehicles to the area for upcoming patrols in the region alongside Russian forces.

Turkey and Russia also signed a memorandum of understanding at the meeting calling for the "stabilization" of Idlib's de-escalation zone, where acts of aggression are expressly prohibited. Under the deal, a 15 to 20-square-kilometer demilitarized area was established to separate Bashar Assad regime troops and the Syrian opposition in Idlib.

Opposition groups in Idlib will remain in areas where they are already present, while Russia and Turkey will carry out joint patrols in the area to ward off renewed fighting.

The Turkey-Russia deal also calls for the removal of all members of Syrian radical groups from the demilitarized zone. It is not clear if they have agreed to move out.

In a related development, sources with the White Helmets civil defense agency said three civilians were killed in regime attacks on residential areas in de-escalation zones in the provinces of Idlib, Hama and Latakia.

Mostly controlled by the FSA, Idlib is located just across the border from Turkey's southern province of Hatay.

The National Liberation Front (NLF), which is the largest armed opposition group in Syria, previously stated that "most of the heavy weapons are not on the front line anyway." The group also said it was opposed to the deployment of Russian forces in the demilitarized zone.

Despite the withdrawal of the moderate opposition, Hayat Tahrir al-Sham (HTS), an al-Qaida-linked group formerly known as the Nusra Front, the most powerful terrorist alliance in Idlib, has yet to announce its stance on the deal.

Despite the lack of official statements, it is expected that the group will withdraw its heavy weaponry from the region well before the beginning of the patrolling activities on Oct. 15.

After the fall of Aleppo in November 2016, dozens of opposition groups, including Ahrar al-Sham and the HTS, squeezed into Idlib. The HTS is recognized as a terrorist organization by Turkey, the U.S. and Canada.

As a result of Ankara's efforts to prevent a humanitarian crisis and the Sochi deal with Russia, more than 30,000 civilians, who had fled from a possible regime attack, have already returned to their homes in Idlib.

Meanwhile, Syria's Bashar Assad said Sunday that the Turkish-Russian deal is a "temporary one" that prevented bloodshed but that his regime's goal is to restore control over all of Syria.

His comments were made during a meeting of the Central Committee of the ruling Baath Arab Socialist Party.

In his comments Sunday, Assad called the West's objection to an offensive in Idlib "hysterical," adding that a regime military victory there would have foiled their plans against Syria. The Assad regime has accused Western countries of seeking to divide Syria and supporting terrorist groups.

He said Syria is now heading toward a "battle" to rehabilitate segments of society that supported what he called "chaos and terrorism." He didn't elaborate.

The Assad regime, backed by Russia, has been making a series of so-called reconciliation deals with former opposition, under which they surrendered their weapons and accepted the return of regime authorities in areas they had seized before.