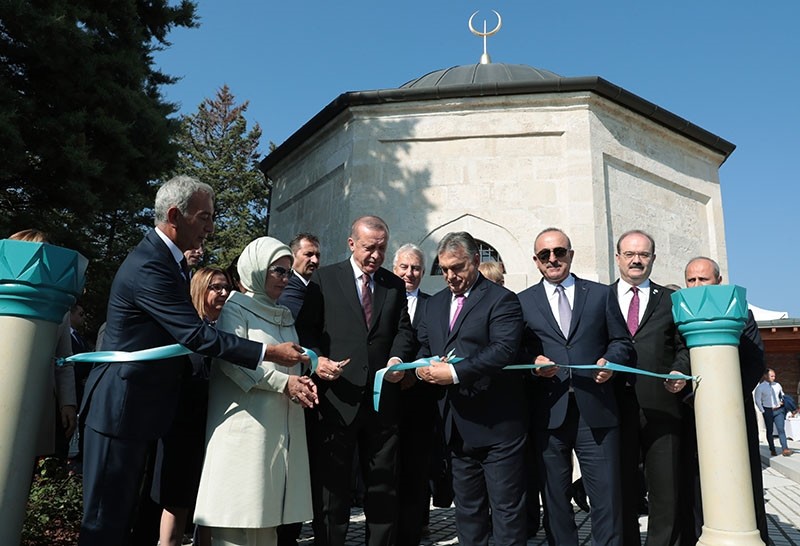 President Recep Tayyip Erdoğan on Tuesday attended the inauguration of the renovated Ottoman-era Tomb of Gül Baba in Budapest, Hungary.

"We cannot look at this tomb defying time as a mere relic that reminds us of our common history," Erdoğan said at the ceremony. "Gül Baba is more concerned with the present and the future than the past."

Gül Baba was an Ottoman Bektashi dervish and poet, and a companion of Sultan Suleiman the Magnificent. He took part in a number of Ottoman invasions of Europe from the reign of Mehmed II onward.

"For those who visit it, Gül Baba reminds us from the depths of history that humanity's survival continues through mutual respect, understanding and friendship between different cultures," the president said.

Gül Baba Tomb was restored through a Turkish-Hungarian partnership after a protocol signed in 2014. It remains a symbol of friendship between the two countries.

The octagonal tomb of Gül Baba (Father of Roses) was built between 1543 and 1548. The area where the tomb lies has also been named "Rózsadomb" ("Rose Hill") after Gül Baba.

As one of the few remnants of Turkish rule in central Europe, the tomb has been protected by the Hungarian authorities to date.

It was initially restored by Hungarian experts in 1963 after being damaged during World War II. Since then it has been designated as a museum and opened to the public.

Erdoğan is on a two-day visit to Hungary. The president is discussing political, economic and security ties as well as mutual regional and international issues including Turkey-EU relations, irregular migration and terrorism during the visit.