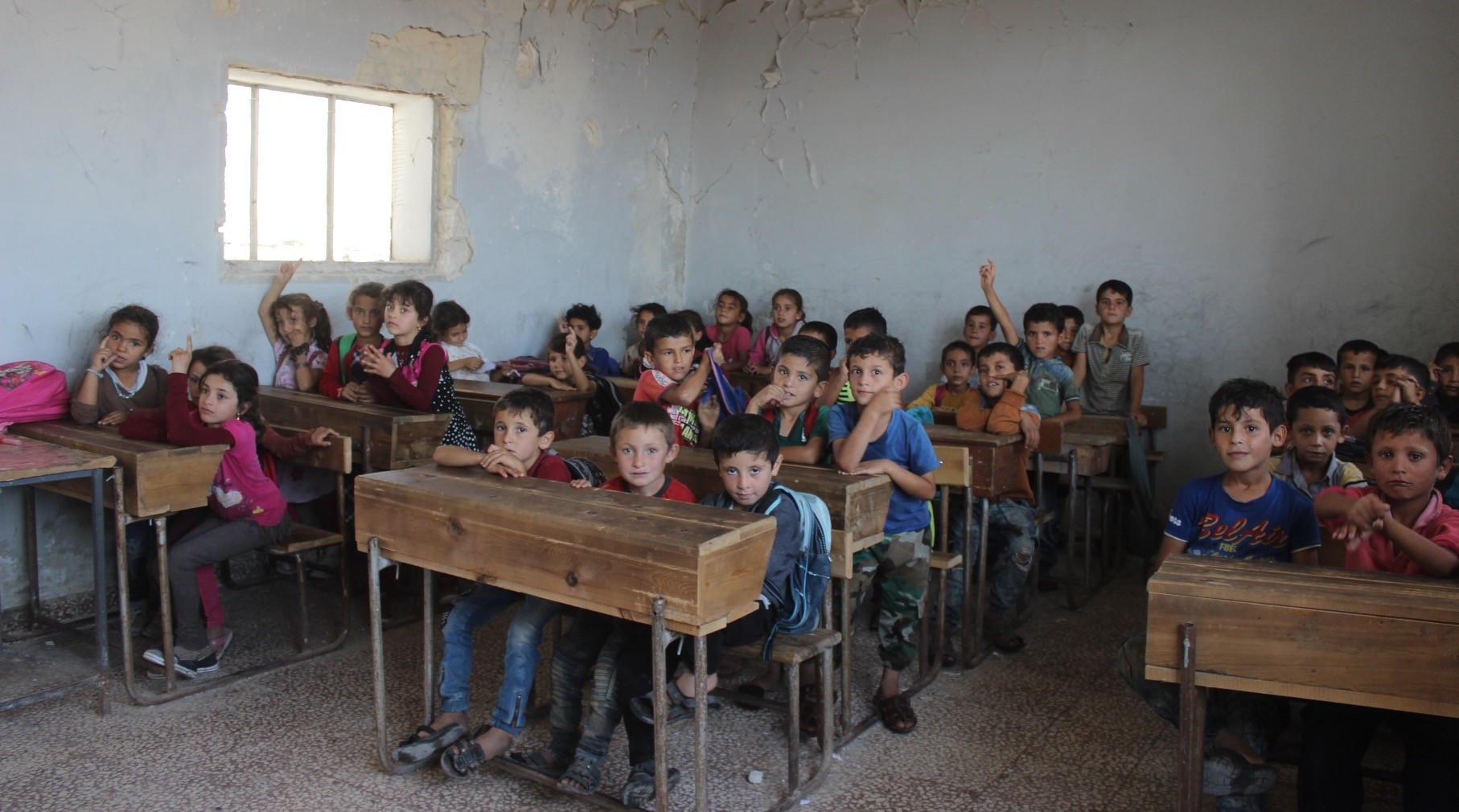 Students in a classroom in Kafr village of Jisr al-Shughour district in the Idlib province of Syria, yesterday.
by daily sabah
Oct 12, 2018 12:00 am

The demilitarized zone around Idlib, which was part of the Sochi deal, has raised new hopes among the Syrian moderate opposition for a political solution, National Coalition for Syrian Revolutionary and Opposition Forces (SNC) Chairman Abdurrahman Mustafa has said. "In the context of the Sochi deal that established a disarmament zone, we visited opposition-held areas, we saw that the members of the Free Syrian Army (FSA) have maintained their positions in the region," Mustafa told the Anadolu Agency (AA) yesterday during his two day visit to Idlib and the surrounding region.

He said that the withdrawal of heavy weapons from the frontline has been completed. "This agreement has opened the way for the Syrian opposition. The regime and Russia believed in a military solution in Syria, but we have always favored a political solution. The Sochi deal both strengthened us and the political solution."

The deal, signed last month between Turkey and Russia to demilitarize Idlib and prevent a regime assault, has been welcomed internationally and it has lessened the concerns of a possible humanitarian crisis.

The FSA was Turkey's main partner when it launched Operation Olive Branch to liberate northern Syria's Afrin from the U.S.-backed Peopl

es' Protection Units (YPG), which is the PKK terrorist group's Syrian affiliate, and Daesh terrorists in less than three months in March.

Recently, a member of the SNC Political Committee, Yasser Ferhan, also praised Turkey for its initiatives, saying, "The withdrawal of the weapons is a positive step and a proof that opposition groups have trust in Turkey."

During the visit, Mustafa also talked about the situation of the civilians who live close to the front lines and said that with the accompanying delegation, they listened to their problems.

In relation, he said that they found the agreement as a right step to solving the humanitarian crisis.

"Under the agreement, the security of the civilians will be ensured," Mustafa added.

Stating that they will produce realistic and applicable projects to administer the region regarding the proceeds of the agreement, Mustafa stressed that they will coordinate with the institutions that have direct contact with the civilians.

Upon President Recep Tayyip Erdoğan's proposal at the summit held in Tehran on Sept. 7, Erdoğan and Russian President Vladimir Putin discussed the preservation and fortification of the cease-fire, as well as taking additional measures for the consolidation in Sochi on Sept. 17.

The understanding between Erdoğan and Putin saw the establishment of a disarmament zone of 15-to-20-square-kilometers by Oct. 15. It will be jointly monitored by the Turkish and Russian armed forces.

Within the framework of the Sochi deal, the military opposition and anti-regime forces in Idlib completed the process of pulling heavy weapons from the front line on Wednesday.

The Turkish Defense Ministry released a statement concerning the process of the withdrawal of the opposition forces' heavy weapons from the region.

Accordingly, Turkey has completed its own part of the deal and stated that the efforts to put an end to tension in the region will continue.

Indicating that the Americans are allied with the structuring in the region, she said that local residents in the region are not satisfied with the arbitrariness of the U.S.-controlled local security officials.

"The efforts aim to establish a special administration which does not comply with the current constitution in Syria," Zakharova said after stressing that "the construction of such a semi-state annoys the non-Kurdish population, Arabs, Assyrians and Turkmens."

The ultimate aim of the YPG is to establish an autonomous region in northern Syria by connecting the northwestern Afrin to Kobani and Jazeera in the northeast.

The Manbij deal between Turkey and the U.S. provided the withdrawal of the YPG terror group from northern Syrian city located west of the Euphrates River in order to establish stability in the region.

The deal envisages the deployment of Turkish forces to assure peace in the region and also to train the local forces to establish and maintain security.