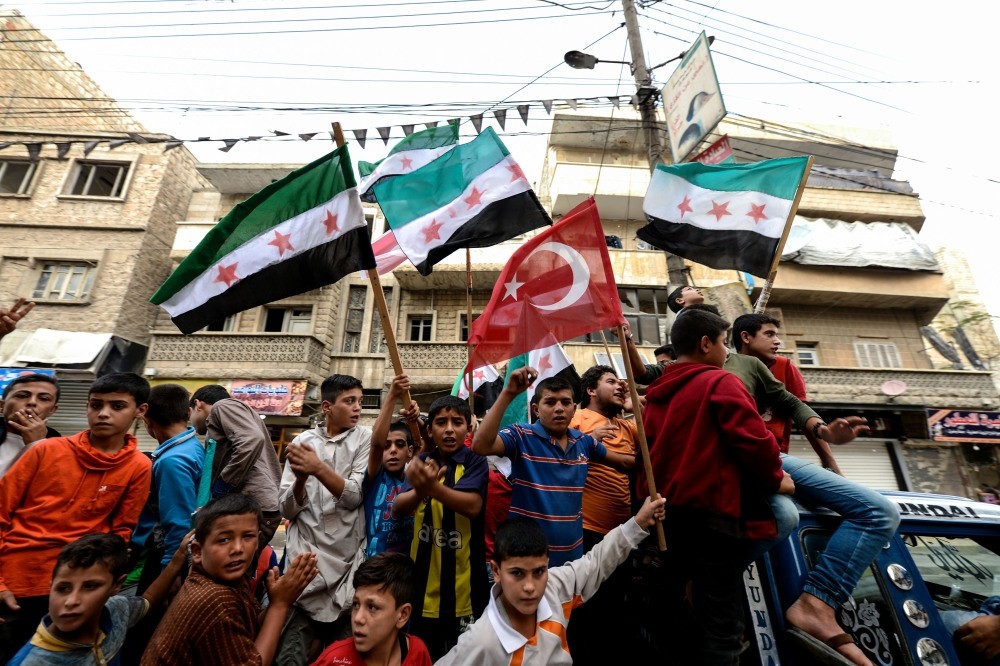 Thousands of people in various opposition-held areas, particularly Idlib, gathered together following the Friday prayer to protest the Bashar Assad regime.
by Özgenur Sevinç
Oct 13, 2018 12:00 am

Turkey's efforts in Idlib continue to be praised by the international community. The latest of these tributes came from the country's partner in the Sochi deal, Russia, which said that the role played by Turkey was quite significant for peace in the region

Leonid E. Slutsky, the chairman of the Committee on International Affairs of the Russian State Duma, has stressed that Ankara has exerted essential efforts to save the lives of many Syrians and played an important role in the peace process in northwestern Syria's Idlib.

"Russia has been closely cooperating with Turkish officials. Ankara's role in Idlib is significant. With the agreement we could save the lives of many people," Slutsky said in an event yesterday organized by the Russian-Turkish Public Forum at the State Duma.

Turkey and Russia agreed in Sochi on Sept. 17 to preserve a cease-fire in Idlib and establish a demilitarized zone. The agreement was welcomed as it is believed to have prevented bloodshed.

Underscoring that the situation in Idlib is highly complex, Slutsky stated that positive developments can be expected in the upcoming period and added that the recent developments are relatively positive compared to the previous years.

The 10-article memorandum of the Sochi deal suggests that the Idlib demilitarized area will be preserved, while Turkish observation posts will be fortified and continue to function. The Russian Federation will also take all the necessary measures to ensure that military operations and attacks on Idlib are avoided and the existing status quo is maintained.

Slutsky underlined that radical groups including Hayat Tahrir al-Sham (HTS), formerly known as the al-Nusra Front, need to be pushed out of Idlib and following this step other conflicting issues, such as the existence of various groups like the PKK-linked People's Protection Units (YPG) would be addressed.

Replying to a question on the existence of the YPG in the region and Turkey's concerns, Pyotr

Tolstoy, vice speaker of the State Duma, said that Russia has been supporting Syria's territorial integrity and added that they are aware of some intentions of forming independent regions supported by some countries.

roup by the U.S. the European Union and Turkey. Ankara also considers the YPG to be the PKK's Syria branch and a terrorist group. The disagreements over U.S. support for YPG terrorists have led to a straining of ties between the two NATO allies.

Touching on bilateral ties, Tolstoy said that the Russian-Turkish Public Forum aims to boost relations and dialogue between the two countries.

Commenting on the issue of visa liberalization with Turkey, Tolstoy pointed to Russia's security concerns. He said that as there are many Syrian refugees in Turkey who might like to move to Europe using Russia as a transit point it would be considered a challenge for security in Russia. He added that the Russian-Turkish Public Forum can work together to enable visa-free travel for journalists of both countries.