No deal made for Brunson's release, Trump says, thanks Erdoğan for help 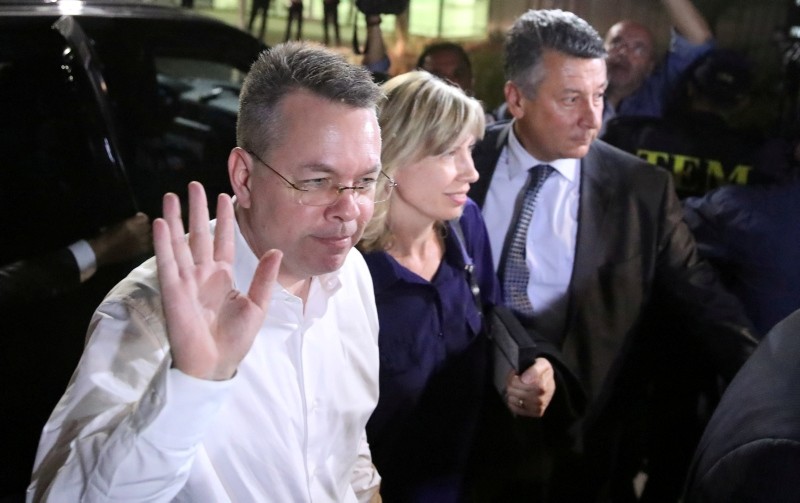 There was no deal with Turkey for the release of American pastor Andrew Craig Brunson, U.S. President Donald Trump said Saturday, thanking President Recep Tayyip Erdoğan for his help and signaling a rapprochement in ties after a long period of trouble between the two NATO allies.

On Thursday, U.S. broadcaster NBC reported that the White House had made a "deal" with the Turkish government to release Brunson soon, citing two senior Trump administration officials and one other source familiar with the matter. However, Trump said that such a deal did not take place, adding that he does not make "deals for hostages."

There was NO DEAL made with Turkey for the release and return of Pastor Andrew Brunson. I don't make deals for hostages. There was, however, great appreciation on behalf of the United States, which will lead to good, perhaps great, relations between the United States & Turkey!


Trump also thanked Erdoğan for his help in the case of Brunson, who was freed by a Turkish court after two years of trial under arrest. He was sentenced on terror charges but released considering the time he was in prison.

Pastor Andrew Brunson, released by Turkey, will be with me in the Oval Office at 2:30 P.M. (this afternoon). It will be wonderful to see and meet him. He is a great Christian who has been through such a tough experience. I would like to thank President @RT_Erdogan for his help!

Trump also announced that he would meet with Brunson in the Oval Office.

Erdoğan later responded to Trump on Twitter, stressing that the Turkish judiciary made the decision regarding Brunson "independetly."

"I hope that Turkey and the U.S. will continue to cooperate, as befits two allies. [And] will carry out a joint fight against terrorist group, particularly the PKK, Daesh and the [Gülenist Terror Group] FETÖ," Erdoğan​ wrote.

Turkey's decision to release Brunson accused with alleged ties to FETÖ and the PKK terrorist organization was not due to any pressure from outside but rather the result of the processes of the independent Turkish judiciary, spokesman for Justice and Development Party (AK Party) also said Saturday.

"Despite these impositions and threats" over the case, "none of the Republic of Turkey's institutions including" the presidency took any action on the case of Andrew Brunson due to pressure, Ömer Çelik told reporters in the southern province of Adana.

"At this stage, the judicial process has been completed," he added.

He rebuffed critics' claims that Brunson was freed due to outside pressure, saying such critics had "not followed the process closely."

Brunson was arrested in December 2016 and charged in the Aegean province of Izmir with being a member of the FETÖ, the group behind a defeated coup earlier that year.

The charges against him included spying for both FETÖ and the PKK, a group recognized as terrorist by the U.S. and EU which is responsible for some 40,000 deaths in Turkey, including women and children.