Erdoğan arrives in Moldova for 2-day visit to boost ties 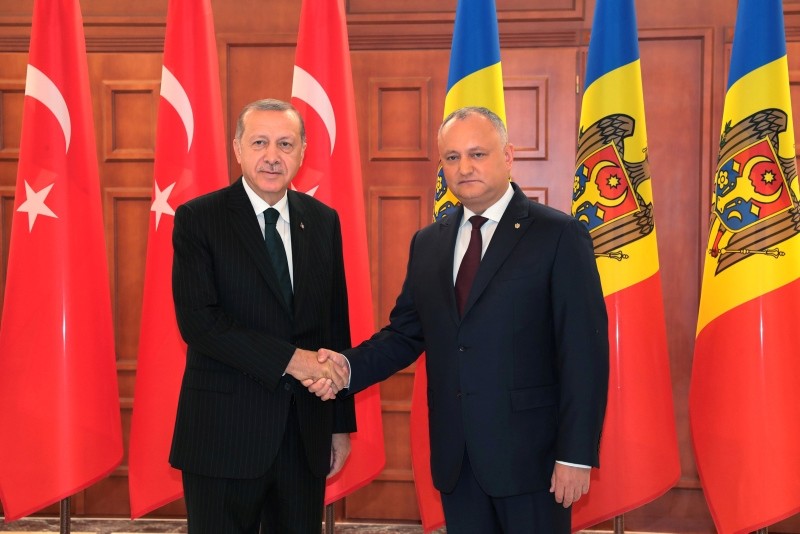 President Recep Tayyip Erdoğan arrived in Moldova on Wednesday for a two-day visit aimed at boosting political and trade ties with the former Soviet republic.

Erdoğan met President Igor Dodon for talks Wednesday at the presidential building, which was reopened for the occasion. Turkey funded repairs the building required after it was ransacked in 2009 by demonstrators protesting elections they said were rigged by the then-communist government.

Speaking at a news conference after his meeting with Dodon, Erdoğan said the two countries will work to boost economic ties.

"In 2017, the trade volume between our two countries was $466 million. It's below our expectations. Today we agreed to raise it to $1 billion — it's our shared goal," Erdoğan said.

He added that two Turkish state lenders — Ziraat Bank and Halkbank — will open branches in Moldova to help the country with its financial situation.

Erdoğan's talks with Moldovan leaders will see discussions on political, economic and security relations along with mutual regional and international issues, and terrorism.

The president will also attend a business forum and is expected to inaugurate one of the pre-schools supported by Turkey's Presidency for Turks Abroad and Related Communities (YTB).