Turkey ready to do its part for resolving Cyprus issue, Ankara says 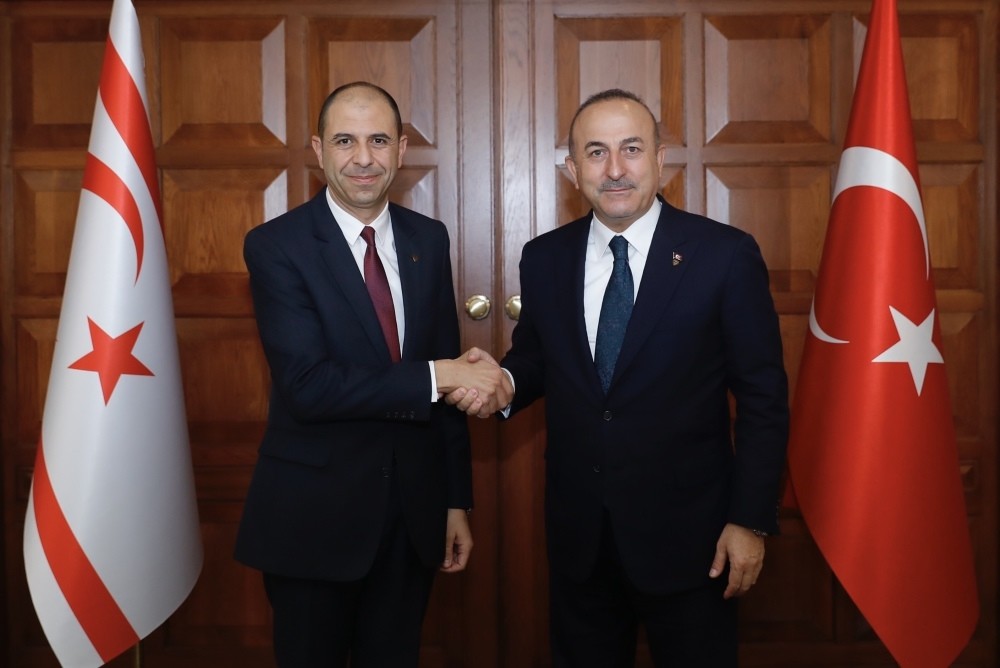 Turkey is ready to do what is necessary to find a solution to the decades-long Cyprus issue, yet it will not compromise on the protection, interests and rights of the Greek Cypriots, Foreign Minister Mevlüt Çavuşoğlu said

Foreign Minister Mevlüt Çavuşoğlu said yesterday that Turkey is ready to do its part for finding a substantial solution to the ongoing Cyprus issue, while underlining that Turkey will not allow any fait accompli or unilateral steps in the island.

"We will never shy away from taking steps to protect the interests of Turkish Cypriots and Turkish people," Çavuşoğlu said in a joint press conference with Turkish Republic of Northern Cyprus (TRNC) Foreign Minister Kudret Özersay.

"We want a permanent resolution and peace. Since the beginning, Turkey has demonstrated this to the world not only with its statements but also with its steps taken; in the following process, we will do our part for the resolution," Çavuşoğlu added regarding the decades-long peace talks between the Turkish and Greek sides of the island.

To resolve the Cyprus issue, there have been some efforts, including peace talks last year in July. Çavuşoğlu said previously that the talks brokered by the United Nations in Crans-Montana, Switzerland failed due to the unreasonable demands of the Greek Cypriot administration and Greece.

Commenting on the possible future steps to initiate talks, Çavuşoğlu said in order to yield results, the sides need to determine the framework of the negotiations ahead of starting a new process, adding that Turkey has been in close cooperation with the TRNC and continuously involved in consultation.

Özersay stressed that the TRNC welcomes the support of Turkey and added that he held talks with Çavuşoğlu regarding a variety of issues such as the future of the island and the hydrocarbon exploration in parts of the eastern Mediterranean.

Meanwhile, U.N. Secretary-General Antonio Guterres said in a report presented to the Security Council on Monday the he believes "prospects for a comprehensive settlement between the communities on the island remain alive."

In the report he also underscored that ahead of full-fledged negotiations, the sides had to agree on the "terms of reference that would constitute the consensus starting point for a possible negotiated conclusion to the Cyprus issue."

Referring to the report by Guterres, Özersay underlined that the secretary-general "had made realistic evaluations." He also pointed to the necessity of maintaining dialogue.

Touching on the unilateral steps of the Greek side on natural resources, Çavuşoğlu stressed: "We are saying that both communities have a right to the resources around the Cyprus Island. In the following process, we are against unilateral steps."

Turkey has been repeatedly stressing that Turkish Cypriots have rights to the resources around the area and rejecting the Greek Cypriot administration's unilateral drilling activity in the eastern Mediterranean.

Prior to the press conference, Çavuşoğlu underscored that the resources of the island need to be shared fairly.

"Turkey will not allow unilateral activities [in the eastern Mediterranean]. We need to protect the rights of Turkish Cypriots with actual steps," Çavuşoğlu said at an Ankara University symposium prior to the press conference. "We will continue drilling activities around the island. We're not trying to fight with anyone. Our aim is a fair sharing of resources," he added.

Earlier this month, Ankara voiced criticism against the move of the Greek Cypriot administration in the eastern Mediterranean inviting energy giants to bid for a license to explore in the area designated as Block 7, one of the blocks located in the unilaterally declared Exclusive Economic Zone (EEZ). The Turkish Foreign Ministry stated previously that the move was disregarding the inalienable natural resource rights of Turkish Cypriots, the co-owners of the island.