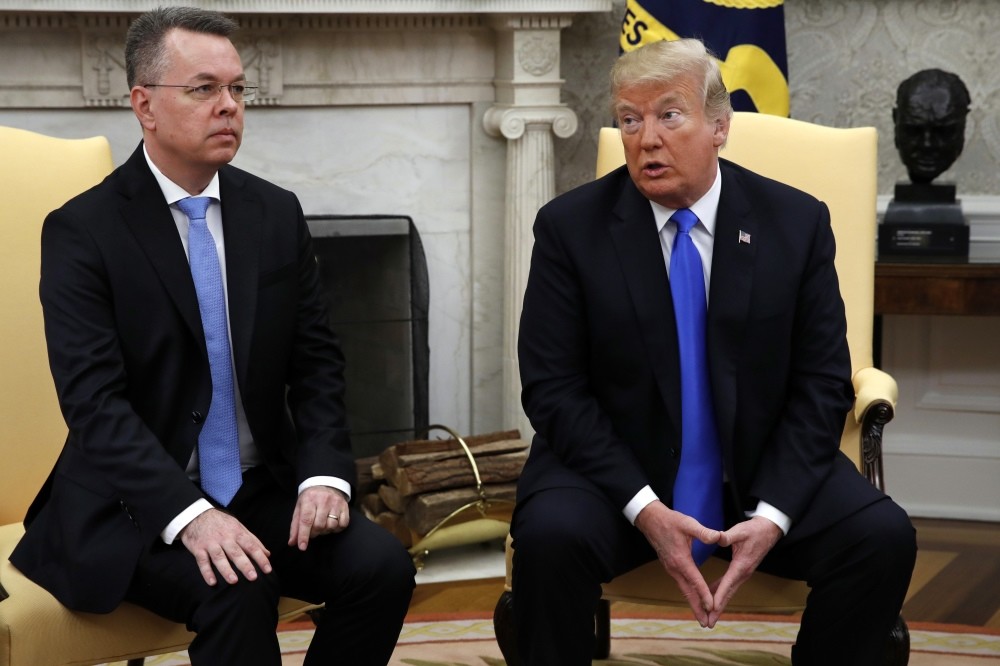 The crisis concerning pastor Andrew Brunson ended with his release last week and diplomatic channels between Turkey and the U.S. have subsequently opened up. However, the main problems in ties, particularly U.S. support of the YPG and Washington's indifference to FETÖ, are yet to be solved

Following American evangelical pastor Andrew Brunson's release and quickened preparations for joint patrols in Manbij, diplomatic traffic between Turkey and the United States has intensified, even as fundamental obstacles linger on. President Donald Trump said he looked forward to improved U.S.-Turkish relations hours after the arrival of Brunson, whose trial was at the center of a diplomatic rift between the two countries, signaling an ease in strained bilateral relations due to numerous issues. Subsequently, diplomatic visits and military cooperation between the two countries have stepped up.

Turkish Chief of Staff Gen. Yaşar Güler and his U.S. counterpart Gen. Joseph Dunford discussed regional security and the fight against terrorism in Washington late Monday. The joint patrols in northern Syria's Manbij and U.S. military support for the PPK Syrian affiliate, the People's Protection Units (YPG), were among the top agenda items of the meeting.

U.S. Secretary of State Mike Pompeo is also paying a visit Turkey today. During the visit, Pompeo is to meet with Foreign Minister Mevlüt Çavuşoğlu and discuss a number of issues including the disappearance of Saudi journalist Jamal Khashoggi.

U.S. Special Representative in Syria James Jeffrey's visit to Turkey, which is expected to be between Oct. 15 and Oct. 23, will be another high-level visit to Turkey from the U.S. side.

Nevertheless, despite recent positive messages from leaders of both countries, experts highlighted that Turkey and the U.S. have numerous fundamental issues to solve, particularly Washington's indifference to Gülenist Terror Group (FETÖ) members and the presence of the YPG east of the Euphrates in Syria.

"The U.S. does not consider Turkey an equal partner, therefore it is far away from understanding Turkey's sensitivities and security concerns," Kemal İnat, an academic at Sakarya University, told Daily Sabah. He also underlined that the two countries will not enjoy an amicable relation if Washington does otherwise.

Relations between Turkey and the United States were strained over the past few months with the trial of Brunson in Turkey on terrorism charges for alleged links to the PKK terrorist group and FETÖ, which orchestrated a coup attempt on July 15, 2016.

Reportedly under pressure from evangelical leaders ahead of the midterm election in November, Trump slapped sanctions on two Turkish ministers in August and doubled tariffs on aluminum and steel imports from Turkey, to hurt the economy, leading bilateral relations to hit rock bottom.

Turkish officials, from the very beginning of the crisis, reiterated that the Turkish judiciary will make the final decision about Brunson and they will not interfere in the legal process. Accordingly, the Turkish court released Brunson from house arrest last week.

Oğuzhan Bilgin, a political analyst, told Daily Sabah that even though the tackling of the Brunson issue led to a detente period in bilateral relations, Turkey and the U.S. suffer from fundamental problems that cannot be resolved through reconciliation sparked by the release of Brunson.

"The U.S. has been trying to maintain unipolar and hierarchical diplomatic relations with Turkey since the Cold War, but Turkey has wanted to change this situation and transform [relations] into bilateral relation between two equals in recent years. The Brunson case was a striking example of this effort," Bilgin said.

The trial of Hakan Atilla, deputy general manager of state-owned Halkbank sentenced by an American court on charges of violating U.S. sanctions against Iran and money laundering was another issue straining ties. The Turkish government demanded his release from prison but is yet to get any positive response. Yet, according to reports, severe punishment would not be imposed on Halkbank.

İnat says he expects the Halkbank issue to become a huge problem again after Turkey refused to comply with Washington's sanctions on Iran due to its economic interests.

Another thorn in relations is Manbij in Syria. Manbij, the only Syrian province under the control of the Syrian Democratic Forces (SDF) west of the Euphrates River, has been a source of tension between the two countries since 2016, when the SDF, led by the YPG took control of the city with the support of the U.S. army. Turkey views the YPG as an extension of the PKK, which has waged a three-decade terrorism campaign on Turkish soil.

In an effort to find common ground to solve the dispute, the Manbij road map foresaw the withdrawal of YPG forces from the city and joint patrolling of both countries was announced in early June.

Despite the 90-day deadline set, it passed in early September, and Ankara accused Washington of dragging its feet on the implementation of the agreement. Yet, recent ease in bilateral relations sparked by the release of Brunson has projected on the Manbij deal as well. Defense Minister Hulusi Akar said late Monday that joint patrols will begin soon, signaling effective enforcement of the deal, in spite of the delays.

Two major disagreements for Ankara, namely the extradition of Fetullah Gülen, the U.S.-based leader of FETÖ and U.S. military support given to the YPG east of the Euphrates, remain unsolved and are significant obstacles in normalizing ties between the two NATO allies.

Washington has been infuriating Ankara by refusing to extradite Fethullah Gülen, who is the mastermind of the July 15 coup attempt and has been living in the U.S. since 1999 on self-imposed exile. Ankara has demanded the extradition of FETÖ from U.S. authorities and submitted boxes of evidence suggesting Gülen's direct role in the failed coup, yet there has been no result on the side of the U.S, which has disregarded tranches of evidence.

The U.S.' military and political support for the YPG, which has been seeking an autonomous rule in northern Syria, stands as another stumbling block in overcoming strained ties between Ankara and Washington.

In response to the terror threat near its borders, Turkey launched two cross-border military campaigns in the past two years. Erdoğan vowed recently to expand Turkey's military campaign into the much larger YPG territory east of the Euphrates.

Commenting on the likely operation by Turkey, İnat indicated that in case of an operation Washington may cooperate with Turkey or take a harsh stand, but, he is not expecting a cooperative move.

"The American administration tends to renege from its promises starting from the Obama administration. Previously, they said that YPG will not enter Manbij and Trump evaluated the arms transportation to the terrorist group as wrong, yet today the contrary happened." İnat said, signaling that even if the U.S. makes remarks in favor of cooperation, it may act differently. Even though some believe that the Manbij deal would diminish Washington's help to the terrorist group, experts disagree.In relation to the issue, Bilgin stated that the U.S. may be willing to make concessions in Manbij, however, he is not expecting any backtracking in the east of Euphrates.

Underscoring that the east of Euphrates is the most challenging hurdle in the relations, Bilgin said that "Washington [has] invested too much in this area where it has been exerting efforts to create a new state [of the YPG]."