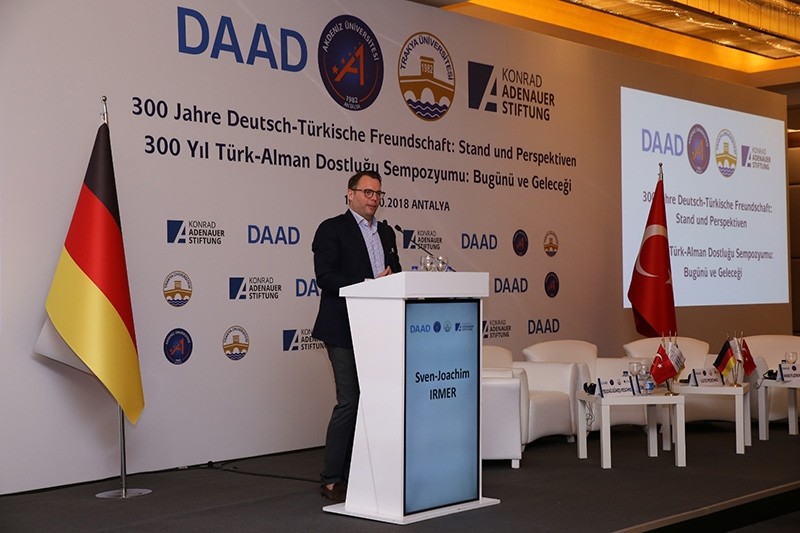 Sven-Joachim Irmer, Director of Konrad-Adenauer Foundation, spoke at the opening ceremony of the congress.
by daily sabah
Oct 19, 2018 12:00 am

A three-day congress on the current state of Turkish-German relations began in southern Turkey's Antalya yesterday.

The congress will focus on the political and economic as well as the historical development of diplomatic relations between the two countries.

Renowned experts, academics and journalists from Turkey and Germany will attend the program.

The event, entitled "300 years of German-Turkish friendship: Current Situation and Perspectives," aims to discuss the historical development of bilateral relations that dates back to 1718, when Ottoman Sultan wrote a letter to the Prussian King Wilhelm I, marking the starting point of diplomatic relations.

The congress will also address political, economic, military and cultural aspects of modern-day relations, which started to emerge in the 1960s.

As a result of labor agreements signed with various European countries in the 1960s, Turkish immigrants began to migrate to these nations, particularly Germany, and have become an important part of the communities.

The refugee problem and its effects, as well as Turkish-German relations in the context of European integration, are other topics to be discussed during the event.

It is being jointly organized by the Konrad-Adenauer Foundation, the German Academic Exchange Service, Akdeniz University and Trakya University. Turkey and Germany are currently going through a normalization process after the two countries were locked in heated debates and ultimatums for one-and-a-half years over a series of issues, including the PKK and the Gülenist Terror Group's (FETÖ) presence in Germany, and German nationals detained in Turkey