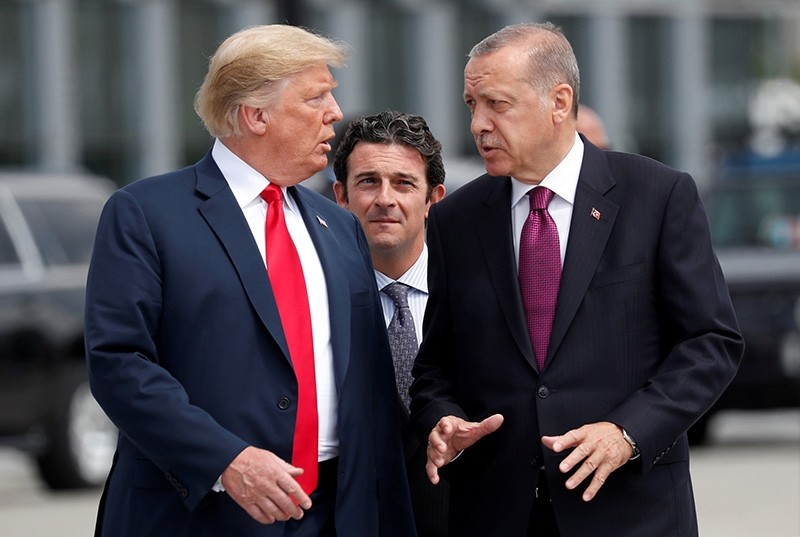 According to a statement by the presidential press office, Erdoğan and Trump agreed all aspects surrounding the death of Khashoggi, a dissident Saudi journalist killed in the Saudi consulate in Istanbul, need to be brought to light.

Erdoğan said earlier Sunday he would reveal the "truth" about the Khashoggi case on Tuesday while Turkish officials vowed to pursue the case after Saudi Arabia's admission of guilt.

The two leaders discussed the situation in Syria, stressing the importance of the Manbij road map and maintaining peace in Idlib.

At the beginning of the month, Turkish and U.S. forces began training for joint patrols in the northern Syrian city of Manbij in line with a deal focusing on the withdrawal of the PKK-affiliated People's Protection Units (YPG) terror group from the city in order to stabilize the region.

In Idlib, a Turkish-Russian deal managed to hold off a regime offensive on the opposition-held enclave, which would have likely triggered a humanitarian disaster. So far, despite delays in extremist groups' withdrawal from Idlib, the deal has held.

In regard to the Khashoggi case, Saudi Arabia, after weeks of denial, finally admitted Saturday that Khashoggi was killed in the country's Istanbul consulate the day he disappeared there on Oct. 2. Riyadh's explanation that Khashoggi, a well-known critic of Saudi policies, was killed in a brawl in the consulate was ridiculed on social media, while an anonymous Saudi official speaking to Reuters on condition of anonymity yesterday explained grisly details of his death. The official said Khashoggi's body was wrapped up in a rug and handed to what he called a "local cooperator" for disposal.

Separately, the case of Brunson, who was found guilty of terror charges in Turkey, had strained relations between Turkey and the United States were strained over the past few months until his release on Oct. 12.

Brunson, who has worked as an evangelical pastor at the Evangelic Resurrection Church in the western city of Izmir for the past 20 years, was arrested in Turkey in September 2016 for alleged links to the PKK and FETÖ, the group that orchestrated a coup attempt on July 15, 2016. On July 25, citing Brunson's health problems, an Izmir court ordered him moved from jail to house arrest.

The Second High Criminal Court in western Izmir province later ruled for Brunson to be sentenced to three years, one month and 15 days in prison, but said he would not spend any more time in custody because of the time he has already served. He returned to the U.S. the same day and was later received by President Trump in the White House.