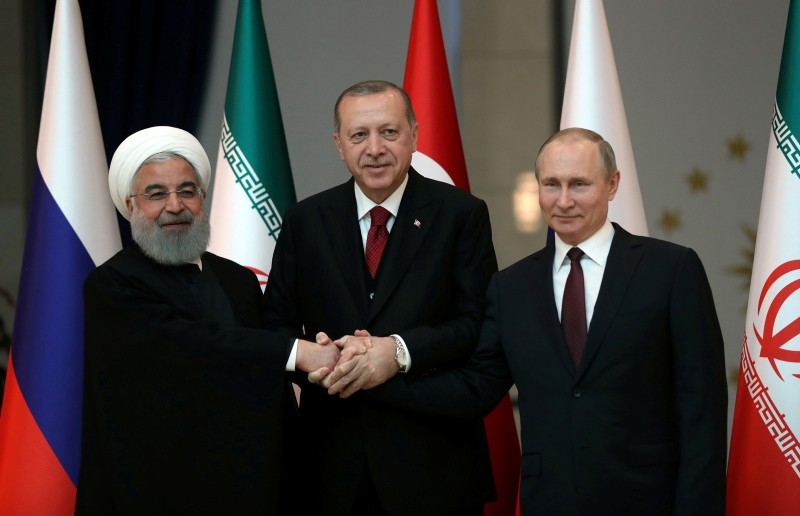 Presidents Hassan Rouhani of Iran, Tayyip Erdogan of Turkey and Vladimir Putin of Russia pose before their meeting in Ankara, Turkey, April 4, 2018. (Reuters Photo)
by Daily Sabah Oct 24, 2018 12:00 am

Russia is already working on the next leaders' summit on a peaceful resolution to the Syrian conflict with Turkey and Iran, Russia's Foreign Minister Sergei Lavrov said Wednesday.

"Three summits have already taken place in Sochi, Tehran and Istanbul. Now it's our turn to prepare the next summit. We hope that everything will be done to ensure that the new meeting of leaders marks further movement forward in the Syrian settlement," Lavrov said during a meeting with Turkish Deputy Foreign Minister Sedat Önal and Iranian Deputy Foreign Minister Hossein Ansari.

Russia's top diplomat also stressed that the Astana format of the Syrian peace talks, sponsored by Turkey, Russia and Iran, was the most effective so far for the conflict's settlement.

"This is why the Astana format is subjected to attacks from those who think not about the interests of Syrian people, but about their geopolitical plans in this region," Lavrov said.

In an effort to contribute to the efforts to end the ongoing Syrian conflict, Turkey, Iran and Russia launched a process in the Kazakh capital Astana. Last year, the three so-called guarantor countries agreed in Astana to establish de-escalation zones in the northern province of Idlib and parts of neighboring Latakia, Hama and Aleppo.

Turkey, Russia and Iran argue the Astana process is not an alternative but a complementary effort to the United Nations-sponsored Geneva peace talks.