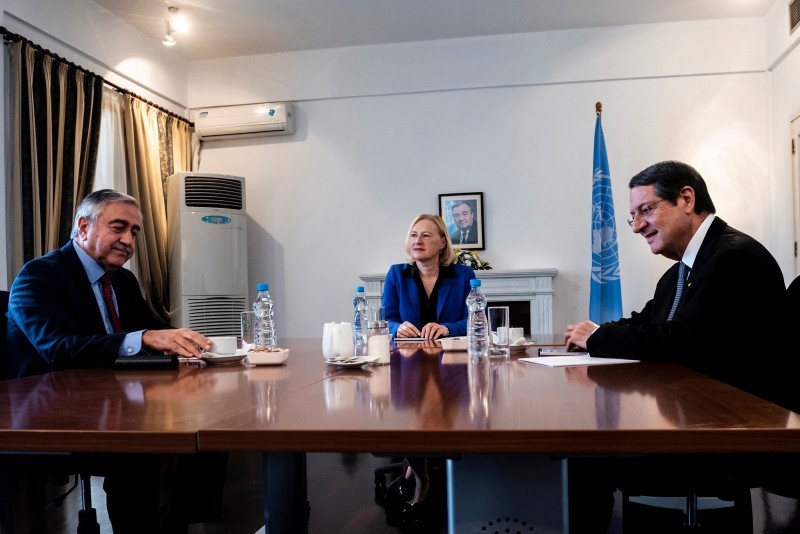 The leaders of divided Cyprus agreed Friday to open next month two more crossing points along a United Nations-controlled buffer zone that cuts across the small island nation, in a bid to generate some momentum toward resuming stalled reunification talks.

Greek Cypriot President Nicos Anastasiades and President Mustafa Akıncı of the Turkish Republic of Northern Cyprus met Friday for the first time in six months to scope out chances of returning to the bargaining table. Negotiations have been at a standstill since July, 2017 when high-level talks at a Swiss resort again ended in failure.

The leaders had a "frank exchange of views" on the way forward, they said in a joint statement after meeting at a United Nations compound on the island on early on Friday. U.N. Special Representative and Head of the United Nations Peacekeeping Force in Cyprus (UNFICYP) Elizabeth Spehar also attended the meeting.

Anastasiades and Akıncı agreed after a two-hour, U.N.-hosted meeting to open the two crossings on opposite ends of the 180-kilometer (120 mile) buffer zone on Nov 12, bringing to nine the total number of crossing points that first opened in 2003.

"The leaders are pleased to announce that on November 12, 2018, crossing points at Lefka/Aplıç (in the northwest) and Dherynia/Derinya (in the east) will be open," the statement said.

Greek and Turkish Cypriot leaders had agreed in 2015 that the two additional crossings should be made ready for use.

"There's a common will for peace, stability and cooperation on the basis of what has been discussed until now," Anastasiades said as he arrived at the Presidential Palace after the meeting.

No decision was taken to resume peace talks. Anastasiades said both he and Akıncı await the arrival of U.N. envoy Jane Holl Lute next week "and the possible proposals that she will bring in order to help with the resumption of negotiations." Lute held an initial round of meetings with both men in July.

U.N. Secretary-General Antonio Guterres said in a report to the Security Council this week that he believes prospects for a comprehensive Cyprus settlement "remain alive" and he will prepare the way for talks to resume.

Guterres has instructed Lute to gauge the "true extent" of convergence on key issues and the willingness of the sides to incorporate novel proposals as part of an overall solution.

The perils of the stalled process have underscored simmering tension between Cyprus's internationally recognized Greek Cypriot government and Turkey in overlapping claims of jurisdiction for offshore oil and gas research. The matter also strains ties between NATO allies Greece and Turkey.

Only Turkey recognizes a 1983 Turkish Cypriot declaration of independence and maintains more 35,000 troops in the north.

Successive peace proposals since the late 1970s have been based on reunifying the island as a bizonal, bicommunal federation.

In recent days, Anastasiades created a stir among Greek Cypriots by floating the idea of a looser, decentralized federation, that critics said would amount to little more than a confederation of two separate states within the European Union.

On Friday, the president tweeted: "We have reaffirmed that the solution sought is a bi-zonal bi-communal federation. I explained to Akıncı and discussed my proposal for a more functional solution by decentralizing some powers."

Anastasiades has yet to elaborate publicly on what his proposals on a "looser federation" are.

The United Nations has made clear it will not fully engage in a new peace process unless Cypriot leaders are committed into entering negotiations in a spirit of compromise.

Friday was only the second time the two leaders have met face to face since last year's abortive peace conference. The previous meeting was an informal dinner in April at which they agreed to disagree.

The Swiss peace conference collapsed over the security arrangements for a reunified island.

The Greek Cypriot leadership is deeply opposed to Turkey retaining any long-term troop presence on the island or the right to intervene to safeguard Turkish Cypriot interests.

Under the island's 1960 treaty of independence, Greece and Turkey, along with former colonial ruler Britain, secured rights to intervene to safeguard the island's sovereignty, rights the Greek Cypriots want to be scrapped.

Turkish Cypriots are reluctant to do so, having endured armed attack and isolation in besieged enclaves for a decade after Greek Cypriots unilaterally changed the constitution in 1963.