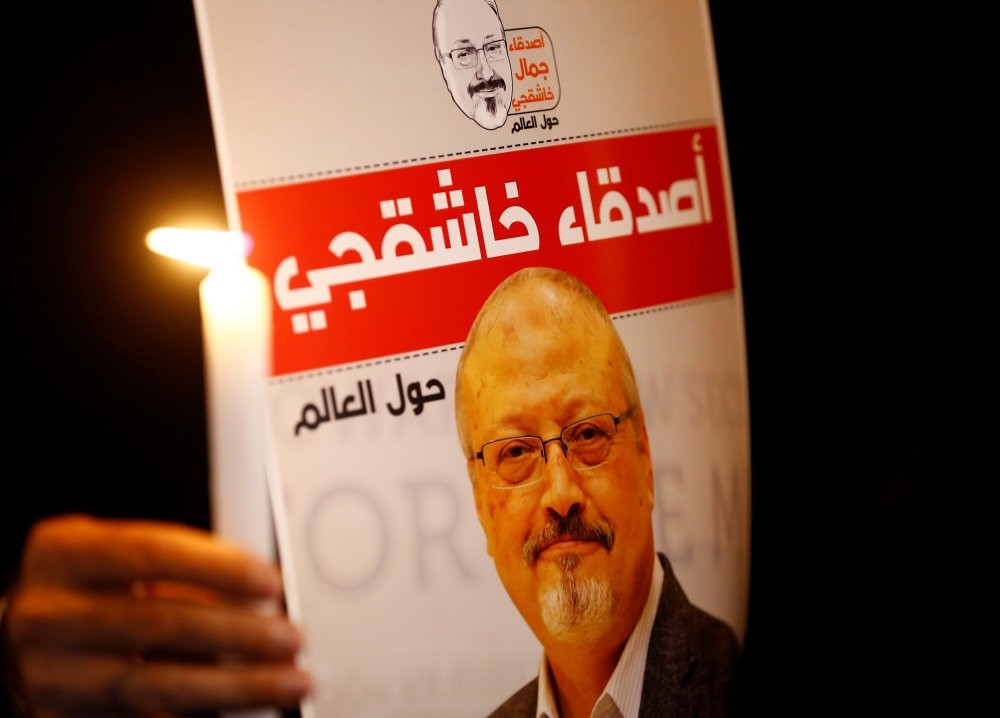 A demonstrator holds a poster with a picture of Saudi journalist Jamal Khashoggi outside the Saudi Consulate in Istanbul, Oct. 25.
by Daily Sabah Oct 27, 2018 12:00 am

As the mystery over the Khashoggi case continues, Turkey has continued to increase its pressure on Saudi Arabia saying the latter's statements on the issue are far from satisfying

Saudi Arabia's explanations regarding the killing of missing journalist Jamal Khashoggi are "childish," President Recep Tayyip Erdoğan said on Friday, continuing his pressure on Riyadh by asking once again: "Where is the body?"

Addressing the initial statements from Saudi authorities on the matter that claimed Khashoggi left the consulate alive, Erdoğan said, "These were funny [remarks]."

"These childish statements are not going hand in hand with the seriousness of the state," Erdoğan emphasized in Ankara, addressing a group of ruling Justice and Development Party (AK Party) provincial heads.

Khashoggi, a columnist for The Washington Post, has been missing since entering the Saudi Consulate in Istanbul to obtain documents related to marriage on Oct. 2. The journalist is believed to have been murdered in the consulate.

Since the beginning of the crisis almost a month ago, the Saudis have changed their statements more than once. First, they claimed that Khashoggi was still alive and had already left the consulate. Then, they accepted that he was killed but said that it was as a result of a "fistfight." The latest statement came on Thursday when Saudi Arabia's chief prosecutor said the suspects in the murder of Khashoggi acted intentionally."It is obvious that he [Khashoggi] was killed but where, you have to show the body," Erdoğan said, in a harsher tone than usual.

'Saudi Arabia has identified the killer'

The killer has already been identified by Saudi Arabia from among the 18 arrested by Saudi officials last Friday, added the president. He said he spoke with Crown Prince Mohammed bin Salman. "I also told the crown prince. I said, 'You know how to make people talk. Whatever happened between these 18 people, this dodgy business is among them. If you are determined to lift suspicion, then the key point of our cooperation is these 18 people.'"

The kingdom has detained 18 people and dismissed five senior government officials as part of the investigation. The crown prince, who has cast himself as a reformer, said the killers would be brought to justice.

He also asked the kingdom to hand over those arrested to Turkey in order to be tried in the country, where the incident occurred.

"If you cannot judge them, then send these people to us. We will subject them to a trial in court," Erdoğan said, implying that the judiciary process can take place in Turkey. "Information has come from the Turkish side indicating that the suspects in the Khashoggi case embarked on their act with premeditated intentions," prosecutor Saudi bin Abdullah added in a statement, carried by the Saudi state news agency SPA.

"The public prosecution continues its investigations with the accused in light of what it has received and the results of its inquiry," he added without giving further details. Stating that Turkey continues to share information and documents regarding the case of the slain journalist, Erdoğan said there was no rush as there were plenty more where those came from.

Erdoğan also said that Saudi Arabia will send a chief prosecutor to Turkey on Sunday to meet his counterpart in Istanbul.

Turkish authorities have been dealing with the case closely since day one, doing what it takes to reveal the truth, including pressuring Saudi Arabia through diplomatic channels. The last diplomatic attempt came on Friday, when Foreign Minister Mevlüt Çavuşoğlu talked with his Saudi counterpart Adil el-Cubeyr regarding the issue. However, no details were given on the phone call. President Erdoğan also held talks with Canadian Prime Minister Justin Trudeau on Friday over the case, and shared information with him on the issue.

A highly detailed investigation on the case is also being conducted. As a part of this investigation, the Saudi Consulate where the crime is believed to have occurred is also under heightened scrutiny amid near-daily revelations about the case. A van left the consulate on Friday morning after consular staff moved three suitcases and a black plastic bag to the vehicle, according to an Anadolu Agency (AA) reporter on the scene outside the consulate.

Meanwhile, Khashoggi's son left Saudi Arabia on Thursday after the kingdom revoked a travel ban, allowing him to travel to the United States.

Palladino said on Thursday that U.S. Secretary of State Mike Pompeo had discussed Jamal Khashoggi's son during his recent visit to Riyadh and "made it clear" to Saudi leaders that Washington wanted him free to leave the kingdom.

"We are pleased that he is now able to do so," Palladino said. Saudi media showed Khashoggi's son meeting Tuesday with the crown prince, who reportedly expressed his condolences.

Palladino also said Pompeo attended a briefing on the former Washington Post writer's death with CIA Director Gina Haspel, following her return from Turkey. The White House did not release any details of their meeting.