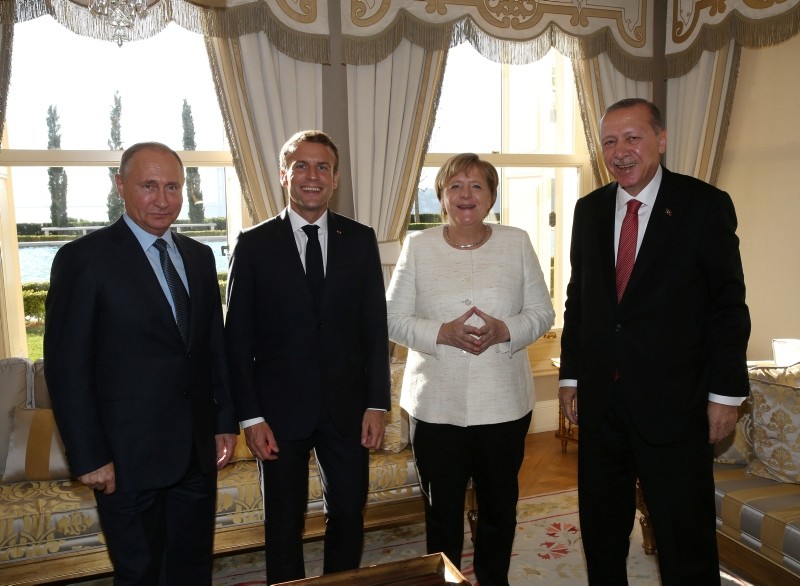 The leaders of Turkey, Russia, France and Germany held talks on Syria at a Saturday summit in Istanbul, hoping to lay the groundwork for an eventual peace in a country devastated by years of war.

Speaking at a joint news conference after the summit, President Recep Tayyip Erdoğan said the summit aimed at reaching a full cease-fire to halt bloodshed in Syria.

"The Syria conflict cannot be solved merely by military means. We will improve cooperation against the terror threat from Syria," Erdoğan said during a joint joint press-conference with Russian President Vladimir Putin, German Chancellor Angela Merkel and French President Emmanuel Macron, adding that a constitutional committee for Syria should be formed as soon as possible.

"We discussed the return of refugees to Syria and agreed that this should be voluntary," he added.

Erdoğan underlined that Astana peace process for Syrian conflict sets an example to international community, saying that Turkey is determined to continue efforts both in Astana process and in other platforms such as today's meeting.

When asked about the murder of Saudi journalist Jamal Khashoggi, Erdoğan said that they have discussed the case of Khashoggi during the bilateral meetings.

"Saudi authorities need to answer who sent the 18 suspects to Istanbul," he said.

A final statement from the four leaders also rejects "separatist agendas aimed at undermining the sovereignty and territorial integrity of Syria as well as the national security of neighboring countries."

Leaders highlighted the need to create conditions throughout the country for the safe and voluntary return of refugees and internally displaced persons to their original places of residence in Syria, and that the returnees need security from armed conflict, political persecution or arbitrary arrests.

French President Emmanuel Macron said that it is unacceptable that aid organizations are blocked in Syria, adding that humanitarian aid corridors should be established.

"We should be vigilant that the ceasefire in Syria will be long lasting," he said. Macron also said that a military offensive on Idlib would have severe political and military consequences.

German Chancellor Angela Merkel said that there must be free elections at the end of this political process and that Syria must become a safe place for the Syrian people, so that they can return to their country.

"A political solution is necessary besides military solutions. We will not tolerate the use of chemical weapons in Syria," she added. 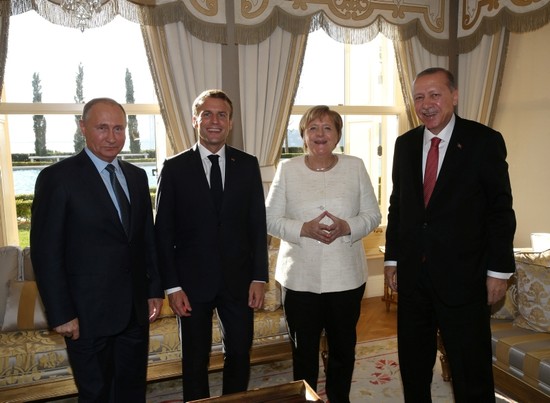 Earlier, the four leaders walked in the gardens of the pavilion, where the talks were held. The renovated structure, which was built in the 19th century for the last Ottoman Sultan Mehmet VI Vahdettin to reside before he ascended to the throne, has sweeping views of Istanbul's Bosporus strait. 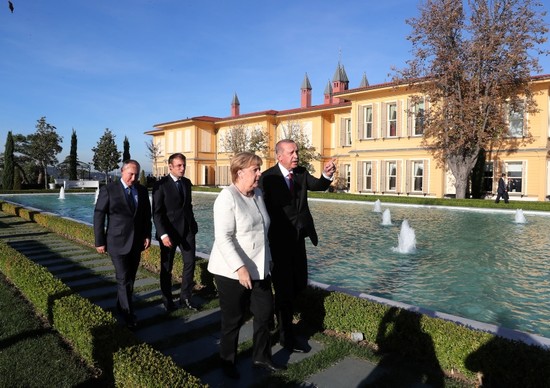 "Now all eyes in the world, primarily of our Syrian brothers, are set on our meeting. I believe that we will act in a sincere and constructive approach and won't let down these expectations," Erdoğan told a press conference shortly before the summit kicked off. 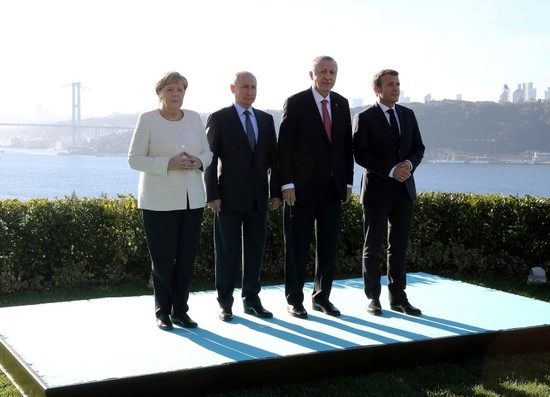 During the summit, the participants will address the Syrian conflict in all its aspects, focusing on the situation on the ground, the political process, and ways to harmonize joint efforts to find a lasting solution to the conflict.

Syria has only just begun to emerge from a devastating conflict that began in 2011 when the Assad regime cracked down on demonstrators with unexpected ferocity. Almost half of the 30 million pre-war population of Syria were displaced as a result of the conflict, with more than half of them seeking refuge in neighboring Turkey, Lebanon and Jordan, in addition to hundreds of thousands of refugees heading to Europe. Nearly half a million people were killed in the conflict.

After arriving in Istanbul, Macron tweeted that what was at stake was averting a "new humanitarian disaster." Turkish Presidential Spokesperson Ibrahim Kalin said on Friday that the primary goal would be to "clarify the steps to be taken for a political solution and to determine a roadmap".

Forming a commission to create Syria's post-war constitution, seen as a stepping stone to elections in the war-torn country, would be a particular point of emphasis, Kalın said. A United Nations plan for a committee to draft a new constitution ran aground this week after Damascus blocked the proposal. De Mistura said the Syrian government would not accept a role for the United Nations in selecting a list for the committee.

The Istanbul talks will also discuss extending the ceasefire around Idlib, where aid groups have warned that a military offensive could spark one of the worst humanitarian disasters of the seven-year war.

With an assault by government troops seeming imminent, Moscow and Ankara agreed on Sept. 17 to create a 15-20 kilometer-wide demilitarized zone ringing Idlib as Turkey sought to avoid an attack leading to a further influx of people across its border. On Oct. 10, the Turkish Defense Ministry announced that the Syrian opposition and other anti-regime groups had completed the withdrawal of heavy weapons from the Idlib demilitarized zone.

Under the deal, opposition groups in Idlib are to remain in areas where they are already present, while Russia and Turkey carry out joint patrols in the area with a view to preventing a resumption of fighting.

Russia, which supports the regime of Bashar al-Assad, and Turkey, which backs the opposition, agreed to create a buffer zone around Idlib, but violence has escalated dramatically leading up to the summit. Turkey and Russia have held talks with Iran on the Syrian conflict in efforts that have often been greeted with suspicion in the West, but Saturday's summit will be the first to include the European Union's two most significant national leaders.

However shelling in the area continued intermittently and has ramped up in recent days. On Friday, Syria's U.N. envoy Bashar Jaafari maintained that the buffer zone is temporary and that Idlib would eventually revert to government control.

However France hopes to extend the ceasefire to enable aid convoys to get through to Idlib, home to four million people.

During a phone call with Putin before the summit on Saturday, Macron reiterated his objectives to "extend the ceasefire in Idlib, prohibit chemical weapons, ensure access to humanitarian aid and find a timetable for the political process," the French presidency said.

The participants talked down hopes of a long-term solution ahead of the summit, with the Elysee palace speaking of "modest expectations" and Putin's spokesman Dmitry Peskov urging all sides to be "realistic."

Peskov said that while all sides want a political settlement, "certain disagreements may exist regarding the instruments and tactics", and the day was to "synchronize our watches" and "attempt to identify common topics."

Syria's opposition, which has previously described Russia's military intervention in 2015 as an occupation, on Friday said it welcomed dialogue with Moscow, signaling readiness for more concessions following the Assad regime's battlefield successes.

However U.S. Defense Secretary Jim Mattis said Russia was no replacement for the United States.

"Russia's presence in the region cannot replace the longstanding, enduring, and transparent U.S. commitment to the Middle East," Mattis told a security conference in Bahrain on Saturday.

The summit also comes amid Turkey's warnings of a new military operation across the border into northern Syria, in zones held by the PKK terrorist group's Syrian offshoot the People's Protection Forces (YPG). The YPG is the dominant group of the Syrian Democratic Forces (SDF), the main U.S. ally on the ground in Syria. The SDF controls almost all the territory in the east of the Euphrates River comprising some one-third of the territory of Syria, except for the Assad regime-controlled area near Deir el-Zour and the Daesh-held area near the Iraqi border. The SDF also controls the districts of Manbij and Tabqah on the right bank of the river.

On Friday, Erdoğan said that Turkey is determined to focus its attention on the east of the river instead of wasting time in the northern Syrian district of Manbij, where Turkey and the U.S. agreed on a deal that focuses on the withdrawal of the YPG terrorist group from the town in order to stabilize the region and conduct joint patrols. The terror group has instead stepped up its presence and activities in the area, completed the construction of trenches and embankments in areas surrounding the entire town center as if it has no intention of leaving.

Turkish troops and their allies the Free Syrian Army (FSA) have captured bordering Jarablous, al-Rai and al-Bab districts from the Daesh terrorist group through Operation Euphrates Shield launched in Aug. 2016. The Turkish military and the FSA also cleared the Afrin district from the YPG in Operation Olive Branch launched in Jan. 2018.

The summit also takes place in the aftermath of journalist Jamal Khashoggi's murder in the Saudi consulate in Istanbul on October 2.

Turkish media reported that Erdoğan will discuss the crisis in one-on-one talks with leaders on the summit's sidelines.