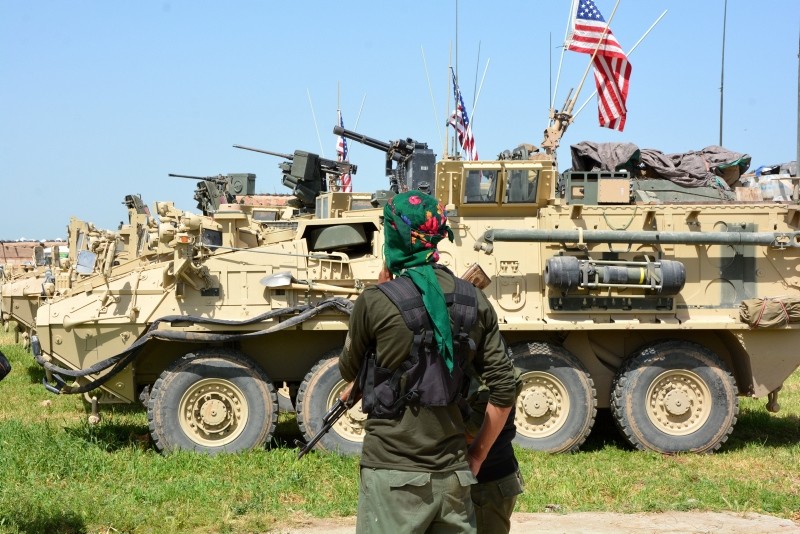 YPG terrorists stand next to US eight-wheeled armored fighting vehicles, near al-Ghanamya village, al-Darbasiyah town at the Syrian-Turkish border on April 29. (FILE Photo)
by Daily Sabah Nov 03, 2018 12:00 am

Turkish Deputy Foreign Minister Sedat Önal held meetings with U.S. Undersecretary of State for Political Affairs David Hale and the Undersecretary of the Ministry of Defense John Rood during his visit to Washington on November 1-2, the foreign ministry said in statement Saturday.

The discussions focused on improving the bilateral relations between the two allies and enhancing coordination on regional issues, the statement said, adding that making existing cooperation mechanisms functional within this context was also emphasized.

Hale and Önal welcomed the Nov. 1 start of joint patrols between U.S. and Turkish forces west of the Euphrates River along the demarcation line outside of Manbij, the U.S. State Department said.

The patrols were launched as part of the roadmap endorsed June 4 by Secretary Pompeo and Foreign Minister Çavuşoğlu to rid the area of the People's Protection Units (YPG) terrorist group.

Underscoring the importance of implementing all the elements of the roadmap, Önal reiterated that it was a fundamental necessity for the U.S. to end its engagement with the YPG in line with protecting Turkey's national security and sustaining peace and stability in Syria.

Reminding that Turkey retaliated in kind to the PYD / YPG's provocative activities along the Turkish-Syrian border in the past days in accordance with the rules of engagement, Önal underlined that Turkey will not tolerate any kind of terror activity beyond its borders.

In addition, our sensitivities regarding the presence of Gülenist Terror Group (FETÖ) and its leader Fetullah Gülen in the U.S., and our expectation from Washington to take concrete steps on the issue in the near future were conveyed to the U.S. side, the Turkish ministry said.

Turkey has been strongly indicating with recent military operations that it will not tolerate terrorists east of the Euphrates river, and it has been taking steps to clear terrorist groups from Manbij as well.

The U.S. has been cooperating with the SDF, which is an umbrella group that consists mostly of YPG terrorists, under the pretext of fighting Daesh.

However, high-level officials from Ankara indicated that Washington's efforts are in vain as it considers the PKK-linked YPG a national security threat. They have also been highly vocal in their criticism of the U.S.' steadfast support for the terror group.

Ankara believes that the U.S. has been using fighting against Daesh as an excuse to justify its heavy arms support to the group which signals that Washington has long-term objectives in the region.

The PKK is listed as a terrorist organization by the U.S., the EU and NATO. The PKK has been fighting the Turkish state for the last 40 years in a conflict that has claimed more than 40,000 lives.