‘Not fair to expect all countries to obey US sanctions’: VP Oktay 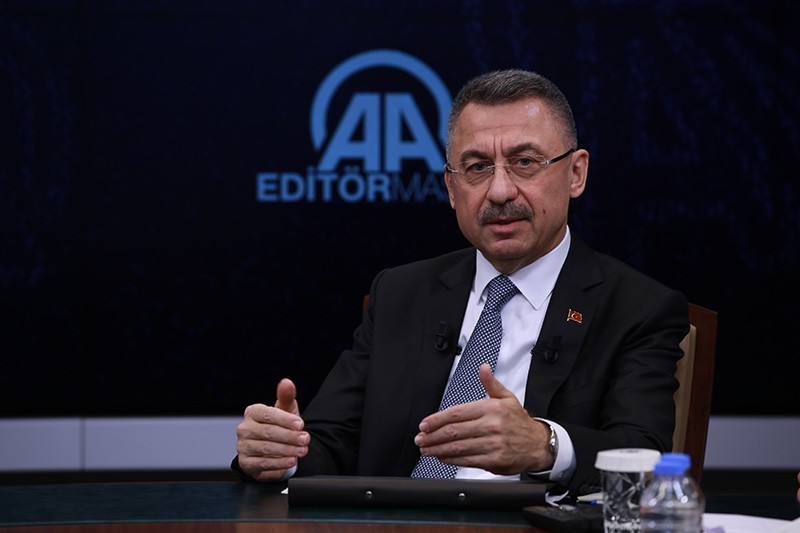 It is not reasonable to expect countries like Turkey to forfeit their own interests to abide by United States sanctions on Iran, Vice President Fuat Oktay said Monday.

"It's not meaningful or fair to expect all countries to obey (U.S.) sanctions upon a country's interests," Oktay said in a live interview with Anadolu Agency.

"We clearly expressed our stance about the U.S. sanctions. We'll see results of a statement to be made today," he added.

Turkish Trade Minister Ruhsar Pekcan said Saturday that Turkey has received initial indications that it will be among eight countries to be granted a waiver from U.S. sanctions against Iran, but is awaiting clarification on Monday.

Turkey imports almost nearly half of its oil needs from neighboring Iran.

The U.S. in August had re-imposed the first round of economic sanctions on Iran, which mainly target the country's banking sector. The second phase of sanctions, targeting Iran's energy sector, went into effect on Monday.

The vice president said foreign exchange, the U.S. dollar and domestic policies are being used as weapons in the economy in the current era.

In regards to the normalization process with the United States, Turkey will start discussing the "real problems," rather than artificial issues, Oktay said. "This is what allies do."

He also mentioned U.S. pastor Andrew Brunson, who was sentenced on terror charges and returned to the U.S. in October having served his sentence.

"Turkey's problem in relations with the U.S. were never about pastor Brunson," he said.

Investigation on killing of Jamal Khashoggi

"Turkey approaches the Khashoggi killing with transparency and in a serious manner," Oktay said, adding that Turkish authorities are now seeking the person who ordered the killing on Turkish soil.

In regard to terrorists operating along the country's 911-kilometer-long border, Oktay said Turkey would not tolerate any threats.

"Our fight on our borders will continue until the moment no element threatening Turkey is left," Oktay said, adding that, "Turkey has shown its determination and done what is necessary" to eliminate threats or threatening formations.

"The U.S. promised to eliminate the People's Protection Units (YPG) in Syria's Manbij but has postponed a solution. Turkey does not have tolerance to postponement any further," Oktay said, referring to the Manbij road map agreed upon by Turkey and the U.S.

On Friday, Turkish National Defense Ministry shared footage of the first round of the Turkey-U.S. joint patrols in Manbij that was conducted as part of the deal between the two countries.

The Manbij deal reached between Turkey and the U.S. in June focuses on the withdrawal of YPG terrorists from the city to stabilize the region, which is in the northeast of Syria's Aleppo province.

The YPG is the armed wing of the PKK's Syrian offshoot Democratic Union Party (PYD) and constitutes the dominating force in the U.S. backed Syrian Democratic Forces (SDF), which controls one-third of Syrian territory.

In its more than 30-year terror campaign against Turkey, the PKK — listed as a terrorist organization by Turkey, the U.S. and the EU — has been responsible for the death of some 40,000 people, including those of women and children. The YPG is its Syrian branch.