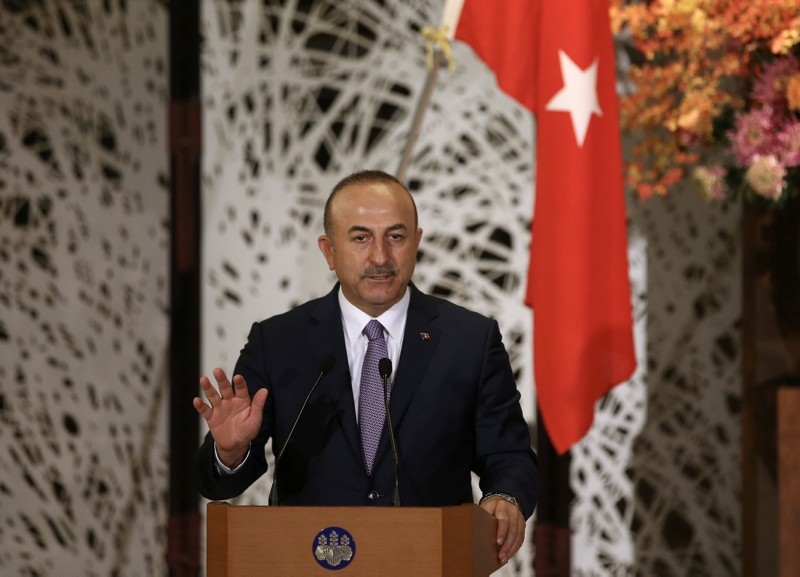 Foreign Minister Mevlüt Çavuşoğlu on Tuesday criticized the U.S. resumption of sanctions on Iran as unilateral, not wise and dangerous, calling for a dialogue and engagement instead.

Çavuşoğlu, in Tokyo for talks with Japanese leaders, told reporters that Turkey opposes sanctions because they don't achieve results.

"As a principle, Turkey is against sanctions and we don't believe that any result can be achieved through sanctions," he said. "Cornering is not wise, isolating Iran is dangerous and punishing the Iranian people is not fair."

Turkey is one of eight major importers of Iranian oil spared temporarily from immediate penalties.

Still, Turkey has to be frank with its ally the U.S. about its opposition. The U.S. "unilateral" measure affects the world, including Turkey, one-third of whose gas imports come from Iran, Çavuşoğlu said, and urged Washington to find other reasonable solutions.

"I think instead of sanctions, meaningful dialogue and engagement is much useful and this is our principle," he said.

The minister said it was not easy for some countries like Japan and Turkey to diversify their energy resources due to the sanctions.

On the U.S. support for terror groups in Syria, Çavuşoğlu said: "The U.S. accepts that there is no difference between PKK and YPG. PKK is in the terror groups list of the U.S. and the UN.

"We formed a working group with the U.S. to fight PKK terrorist organization. The U.S. support for PKK and YPG in Syria is not acceptable."

Calling the PYD/PKK-led umbrella group the SDF a "reliable partner" in its fight against Daesh, Washington continues to provide it with arms and equipment, even as Turkey stresses its terrorist identity.

In its more than 30-year terror campaign against Turkey, the PKK -- listed as a terrorist organization by Turkey, the U.S. and the EU -- has been responsible for the death of some 40,000 people, including women and children. The People's Protection Forces (YPG) is its Syrian branch.

Çavuşoğlu also urged Saudi Arabia to fully cooperate in the investigation of the killing of journalist Jamal Khashoggi in the Saudi consulate in Istanbul last month, demanding the country locate his missing body and hand over suspected collaborators.

Turkey is determined to get to the bottom of the case and Saudi Arabia hasn't answered the key questions, he said. "We have to find out how it happened, who did it and who gave the instructions, and we also have to find the body of the journalist Khashoggi."

President Recep Tayyip Erdoğan has said in a recent op-ed in The Washington Post that the order for the journalist killing came from the highest level of the Saudi government but not King Salman.

On the joint working group between Ankara and Riyadh formed upon the request of the latter, Çavuşoğlu said: "But this working group should be result-oriented."

He also urged Saudi Arabia to reveal the name behind the killing.

He said that 15 people could not come from Saudi Arabia to kill a Saudi citizen without any instruction and permission.

Khashoggi, a columnist for The Washington Post, disappeared on Oct. 2 after entering the Saudi Consulate in Istanbul to receive paperwork he needed to get married.

After days of denying any knowledge of Khashoggi's whereabouts, Saudi Arabian officials said he died in a "brawl" in the consulate but later admitted that he was killed there.

Once inside, he was immediately strangled and then dismembered, according to the Istanbul Prosecutor's office.

Investigation of the incident suggests a special hit squad came to the consulate, scouted out Istanbul's Belgrad Forest, and tried to cover up evidence at the consulate building.

The international community refused to accept the Saudis' claim that the incident was not a premeditated murder.

On the rescue of Japanese journalist Jumpei Yasuda from Syria in October, Çavuşoğlu said: "No ransom was paid as far as I know. Japan never took such initiative, either. We, as Turkey, didn't pay any ransom for rescuing any citizens as well."

He added that if any ransom was paid, radical groups would find grounds to kidnap more journalists and other people.

Expressing pleasure for the return of Yasuda to his country, Çavuşoğlu said that the journalist was kept hostage for over three years.

"Since then, Turkey has tried it's best [to rescue him]," he added.

Yasuda went missing in Syria in 2015 and he was rescued from al-Qaeda captors by Turkish security and intelligence teams in consultations with Japanese authorities last month.