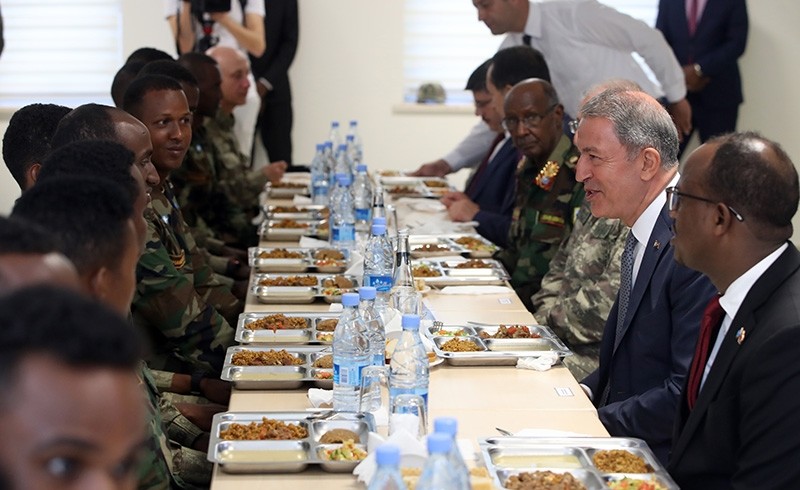 As part of his visit to the East African country, Akar and his delegation visited "African Eagles," the students who receive military training in the command.

Akar also inaugurated the new fitness hall of the school, and stated that he was always with the brotherly Somalis.

"Whatever we do for our brothers here is not enough. Our decision is to be with our Somali brothers and sisters not only today, but also tomorrow," he said.

Akar also said unity and solidarity in Somalia will be beneficial for the region as well.

An important cooperation was realized in training of Somalia Armed Forces, Akar said, adding, the efforts to train officers and sergeants were ongoing.

The Turkish Task Force Command in Somalia -- the only modern military training facility in the country -- was opened in 2017 by Akar, then-chief of general staff.

Akar and his delegation, including Chief of General Staff Gen. Yasar Güler, arrived in the country on Wednesday to hold bilateral relations and military talks. Akar also has visited Libya and Sudan for defense and security talks during his tour of the region.

Turkey has been the biggest supporter of Somalia for years and has its biggest embassy in Africa in Mogadishu.

On Turkish counterterrorism efforts, Akar said: "More than 450 terrorists were neutralized over the last two months."

He added that efforts in northern Syrian city of Manbij were ongoing and the joint Turkey-U.S. patrols were initiated as part of the agreed-upon road map and security principles.

Since June 18, the Turkish Armed Forces have carried out 68 unilateral patrols in Manbij.

The Manbij deal between Ankara and the Washington focuses on the withdrawal of YPG/PKK terrorists from the city to stabilize the region, which is in the northeast of northern Syria's Aleppo province.

"At the end of this, all of the YPG will go east of Euphrates (River), the people of Manbij will take over the city…" Akar said.