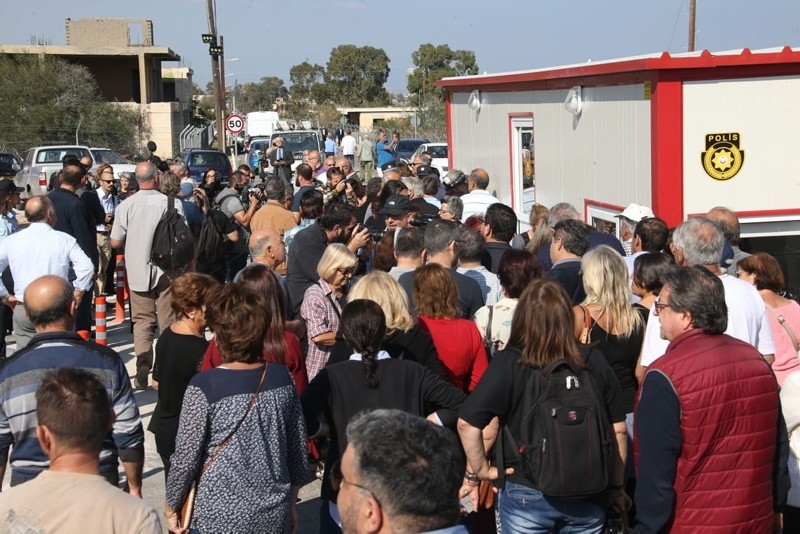 Dozens of people from the island's Greek Cypriot south streamed across the eastern Dherynia/Derinya border post, walking past United Nations peacekeepers into the Turkish Republic of Northern Cyprus.

"I hope for a solution in which we won't need any border crossings at all," Cyprus (TRNC) Presidency spokesman Barış Burcu said in a statement.

At the same time, the Lefka/Aplıç crossing opened in the northwest of the Mediterranean island.

The leaders of divided Cyprus agreed in October to open the crossing points along a U.N.-controlled buffer zone that cuts across the small island nation, in a bid to generate some momentum toward resuming stalled reunification talks.

Greek Cypriot leader Nicos Anastasiades and President Mustafa Akıncı of the TRNC met in October for the first time in six months to scope out chances of returning to the bargaining table.

Anastasiades and Akıncı agreed after a two-hour, U.N.-hosted meeting to open the two crossings on opposite ends of the 180-kilometer (120 mile) buffer zone on Nov 12, bringing the total number of crossing points to nine.

Negotiations have been at a standstill since July, 2017 when high-level talks at a Swiss resort again ended in failure.

The perils of the stalled process have underscored simmering tension between Cyprus's internationally recognized Greek Cypriot government and Turkey in overlapping claims of jurisdiction for offshore oil and gas research. The matter also strains ties between NATO allies Greece and Turkey.

On Nov. 4, President Recep Tayyip Erdoğan warned that Turkey will not allow oil and gas extraction in eastern Mediterranean through plans excluding the nation and the TRNC.

"We do not have an eye on other countries' rights, laws and territories. We only protect the rights of our country and of our brothers," Erdoğan said.

Successive peace proposals since the late 1970s have been based on reunifying the island as a bizonal, bicommunal federation.