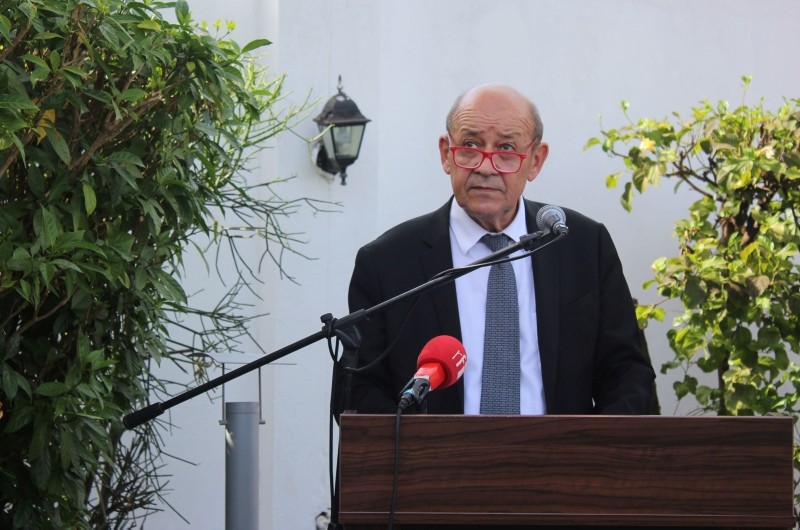 French Foreign Affairs Minister Jean-Yves Le Drian speaks at the inauguration of a French diplomatic office in Banjul on November 5, 2018. (AFP Photo)
by Compiled from Wire Services Nov 12, 2018 12:00 am

Turkey on Monday slammed the latest comments made by French Foreign Minister Jean-Yves Le Drian as "unacceptable," after he accused President Recep Tayyip Erdoğan of playing a "political game" in connection with the murder of Jamal Khashoggi.

"Let us not forget that this case would have been already covered up had it not been for Turkey's determined efforts," Altun said.

On early Monday, Le Drian said that France was not in possession of the recordings as far as he was aware, contradicting remarks by President Erdoğan.

"If the Turkish president has information to give to us, he must give it to us," Le Drian said.

Asked if that meant Erdoğan was lying, Le Drian said: "It means that he has a political game to play in these circumstances."

"Le Drian's most recent comments on Turkey's handling of Jamal Khashoggi's murder does not reflect the facts," said Altun.

He said Ankara shared evidence linked to the murder with officials from a large number of countries and that France was "no exception".

"I confirm that evidence pertaining to the Khashoggi murder has also been shared with the relevant agencies of the French government," he said.

A representative of French intelligence listened to the audio recording and detailed information including a transcript on October 24, he added.

"If there is miscommunication between the French government's various agencies, it is up to the French authorities — not Turkey — to take care of that problem."

Foreign Minister Mevlüt Çavuşoğlu later said Le Drian was "not telling the truth" regarding recordings related to the Khashoggi case, slamming the French minister for his "impudence."

According to Çavuşoğlu, the evidence was given to the French authorities on their request.

Erdoğan said on Friday that Turkey has given recordings "to Saudi Arabia, to America, to the Germans, the French, to the British, to all of them."

Canadian Prime Minister Justin Trudeau on the same day became the first Western leader to acknowledge his country had heard and received recordings of Khashoggi's murder.

"Canada has been fully briefed up on what Turkey had to share," Trudeau said.

Trudeau also said he thanked Erdoğan in person for "his strength in responding to the Khashoggi situation" when the two leaders met in Paris this weekend.

The crown prince is widely suspected of at least having knowledge of the killing, which involved some members of his security entourage. Khashoggi was a Washington Post columnist and a critic of the crown prince who was living in self-imposed exile before his death.

Under mounting pressure, Saudi Arabia has changed its narrative about Khashoggi's killing, first saying that he walked out of the embassy the day he disappeared before eventually acknowledging Khashoggi died inside the consulate. Saudi Arabia has also recently acknowledged Turkish evidence that showed the slaying was premeditated.

Turkey says a 15-member Saudi assassination squad strangled and dismembered Khashoggi at the consulate. Media reports have suggested that his body could have been chemically dissolved as it has not yet been found.

Saudi officials characterize the killing as a rogue operation carried out by Saudi agents who exceeded their authority.