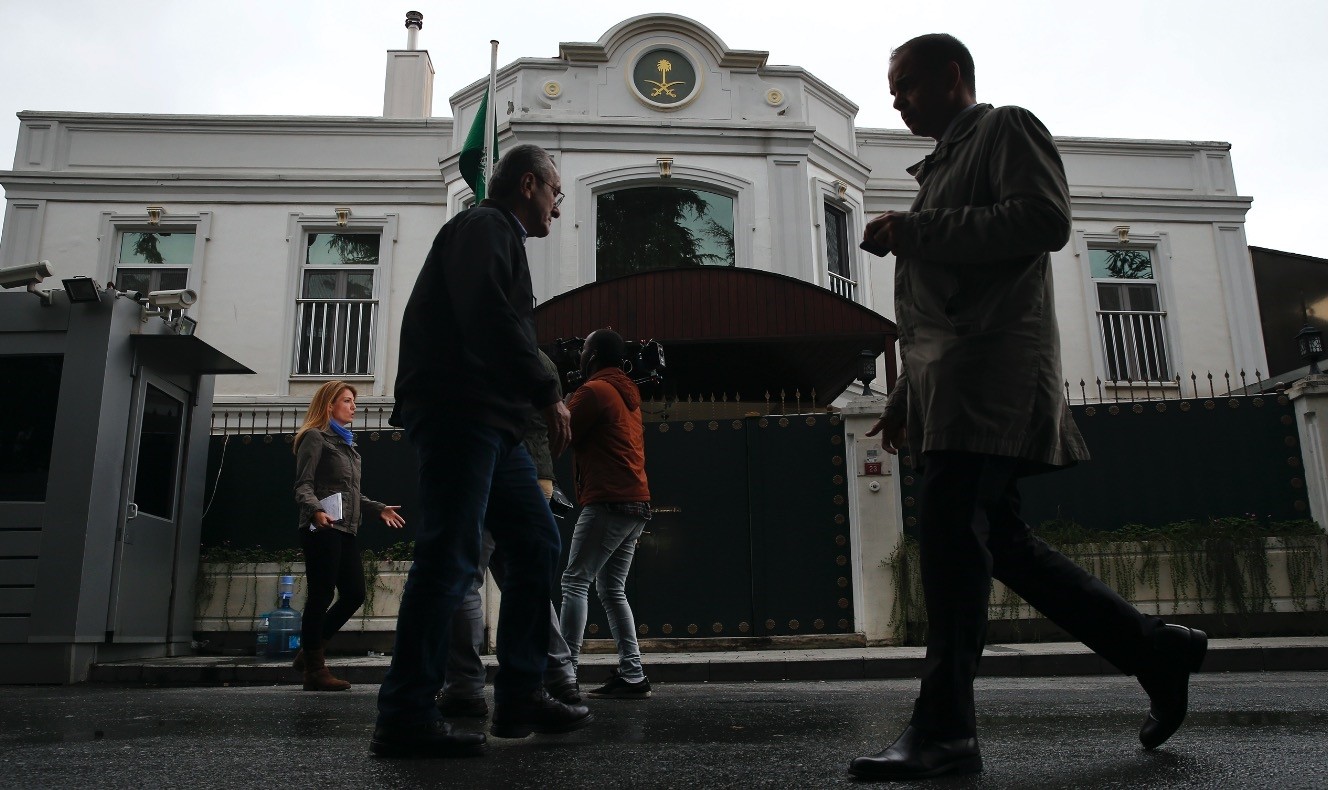 The leaders of Turkey, the U.S. and France agreed in Paris to pressure Riyadh to reveal the truth about slain journalist Jamal Khashoggi, while the Saudi kingdom rejected an investigation by the international community

Saudi Arabia should provide more detailed information and shed full light on the unknowns in the killing of journalist Jamal Khashoggi, several leaders agreed, including U.S. President Donald Trump and President Recep Tayyip Erdoğan, on Saturday in Paris, where they met for the commemoration of Armistice Day. French President Emmanuel Macron and his U.S. counterpart, Donald Trump, agreed that more details are needed from Saudi Arabia on journalist Khashoggi's death, Reuters reported Saturday, citing French presidency sources. Macron and Trump were meeting in Paris to discuss security issues and bilateral ties on the sidelines of World War I commemorative ceremonies.

Accordingly, the two leaders agreed that the case should not cause further destabilization in the Middle East and the fallout from the Khashoggi affair may create a way forward for a resolution to the ongoing civil war in Yemen. During the same proceedings in Paris, presidents Erdoğan and Trump also held discussions over how to respond to Khashoggi's killing, a White House official said yesterday. The conversation took place during a Saturday dinner with heads of state. Khashoggi, a columnist for The Washington Post was announced missing by his fiancee Hatice Cengiz after entering the Saudi Consulate in Istanbul to obtain marriage documents on Oct. 2.

Later in October, the Istanbul Chief Public Prosecutor's Office announced that Khashoggi was strangled to death as soon as he entered the consulate and his body was then dismembered and disposed of in accordance with plans drawn earlier.

Speaking on the issue before departing for Paris on Saturday, Erdoğan said that Turkey has given recordings of the killing of Khashoggi to Saudi Arabia, the United States, Germany, France and Britain.

"We gave the recordings, we gave them to Saudi Arabia, we gave them to Washington, to the Germans, to the French, to the English. They all know since they all listened to the conversations and everything," he said in a televised speech.

He added that Saudi Arabia knows the killer of Khashoggi is among a group of 15 people who arrived in Turkey one day ahead of the Oct. 2 killing.

"The 15 people who came to Istanbul [from Saudi Arabia], who are also among 18 detained by Saudi authorities, surely know who killed Jamal Khashoggi and where his body is. Saudi Arabia could resolve this by making these 15 talk," he said. "The murderers are surely among this 15 or 18, there's no need to look elsewhere."

International organizations have also been waiting for concrete action from the Saudi government to shed light on the murder and bring those who are responsible to account.

The United Nations Human Rights Council approved the adoption of a report on the third Universal Periodic Review (UPR) of Saudi Arabia, after discussing it five days earlier.

The UPR is a process under which the U.N. member states have the opportunity to say publicly the actions they have taken to advance human rights and satisfy their duties on human rights issues.

The report by the Working Group on the UPR consists of 258 recommendations for Saudi Arabia with regard to various human rights issues has included recommendations on an impartial and transparent investigation of the recent death of Khashoggi.

As an answer to the U.N. request, the president of Saudi Arabia's Human Rights Commission, Bandar bin Mohammed Al-Aiban, stressed that the recommendations are in line with King Salman's instructions to regard all those involved responsible and to discuss procedures and structures to avert such a sad event from happening again.

Speaking on calls for an international probe, the former head of Saudi's intelligence service, Prince Turki al-Faisal, asserted on Friday that the kingdom would never accept such an investigation.

"The kingdom is proud of its legal system. It will never accept foreign interference in that system," al-Faisal said while speaking at an International Peace Institute event in New York, adding that he expects Saudi Arabia to "put all the facts on the table."

In late October, Riyadh arrested 18 people over their suspected involvement in an alleged brawl inside the consulate, while Turkey announced its readiness to try the Saudi suspects in the Khashoggi murder in Istanbul if Saudi Arabia doesn't want to prosecute them.