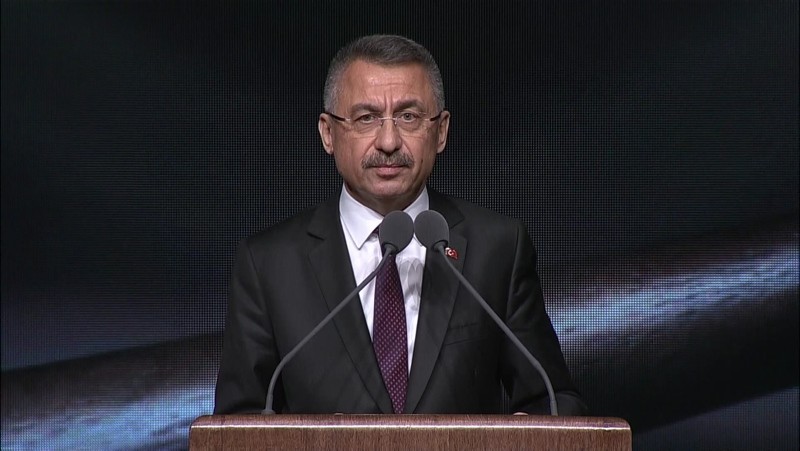 Turkey pulled out of Libya crisis talks on Tuesday in Italy's Palermo province due to its exclusion from a meeting of key players on the conference sidelines.

"Any meeting which excludes Turkey would prove to be counterproductive for the solution of this problem," Vice President Fuat Oktay, who was representing Turkey in the conference, said in a statement following the incident, underlining that it was "very disappointing."

"The informal meeting held this morning with a number of players and having them presented as the prominent protagonists of the Mediterranean is a very misleading and damaging approach which we vehemently oppose," Oktay said.

The Turkish withdrawal came after the country's delegation was excluded from a meeting between Eastern Libyan strongman Khalifa Haftar and several other key national and international players for talks on the sidelines of the Palermo conference aimed at stabilizing the crisis-stricken North African nation.

"Libya cannot be stabilized as long as some countries continue to crush the process in line with their own interests. Libya needs less foreign intervention, not more," the vice president stressed.

"Unlike the others, we are open to a broad dialogue with all Libyan and regional actors. It is impossible for those who are responsible for the current difficult situation in Libya to make any positive contribution to the country's recovery."

Libya has remained dogged by turmoil since 2011, when a bloody NATO-backed uprising led to the ouster and death of long-serving President Moammar Gadhafi after more than four decades in power.

Libya's two main rival leaders — Haftar, who rules most of the east, and U.N.-backed Prime Minister Fayez al-Serraj — met for the first time in more than five months in Palermo, Sicily.

But expectations were limited, with Haftar's camp making clear that he wasn't participating in the conference itself but rather meeting with leaders of neighboring countries on the sidelines.