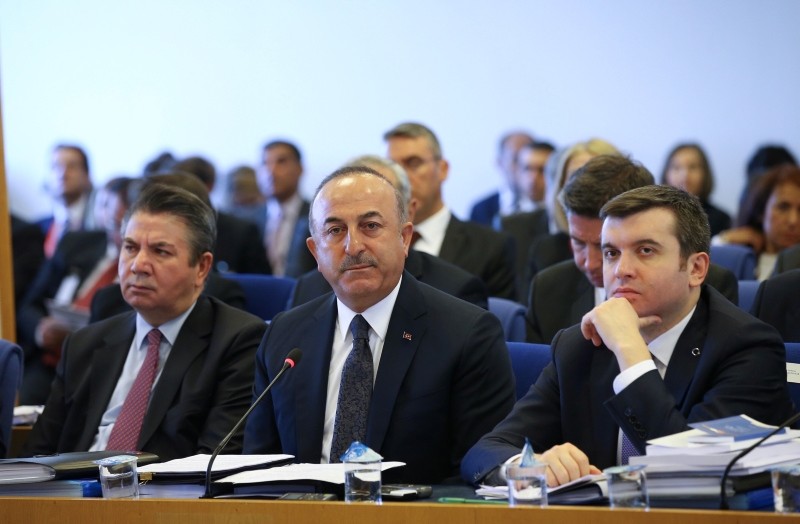 Turkish officials announced Wednesday that Ankara sent extradition requests to 83 countries for 452 members of the terrorist group FETÖ which is blamed for the 2016 coup attempt; while 104 FETÖ members were brought to Turkey in the past two years from abroad

Turkey's international fight against the Gülenist Terror Group (FETÖ) whose military infiltrators are accused of carrying out the July 15, 2016 coup attempt, prevails as Ankara patiently awaits extradition of the group's members from abroad.

As part of efforts to bring the FETÖ network abroad to Turkey, authorities made extradition requests for 452 suspects from 83 countries, Foreign Minister Mevlüt Çavuşoğlu said at a parliamentary meeting Wednesday.

Before and after the 2016 coup attempt that killed 251 people, a large number of Gülenists, mostly high-ranking figures, fled Turkey. Others, including the group's leader Fetullah Gülen, were already living abroad.

The United States is the target of most of the extradition requests. Turkey has sent seven extradition requests for Gülen to Washington but has seen little progress in his extradition. Gülen lives in a posh retreat operated by a foundation linked to FETÖ in Pennsylvania and occasionally gives interviews to foreign media though he never steps out of the tightly-guarded complex. The United States refuses to recognize him and his group as terrorists despite the fact that Turkey sent what Ankara called "hundreds of folders" containing evidence that implicates FETÖ in the coup attempt and other wrongdoings.

Çavuşoğlu said they have brought 104 FETÖ members to Turkey from abroad so far and this number included both those deported to a third country and those extradited under bilateral cooperation agreements with 21 countries. Turkey also contacted its allies to shut down schools operated by FETÖ in 21 countries and hand them over to Turkish authorities.

Media reports said the country has so far identified some 4,600 suspected members of the group around the world. Turkish courts also sporadically issue arrest warrants for FETÖ members abroad.

Ankara has long complained of reluctance from European countries and the U.S. to cooperate in the fight against FETÖ. FETÖ suspects mostly live in the U.S., Germany and Canada. The majority of Turkey's allies in Africa and Asia have shut down FETÖ-linked schools and have already extradited wanted suspects.

Following the coup attempt, tens of thousands of people were detained or arrested for suspected links to the terrorist group. Security forces launch almost daily operations to hunt down suspects who managed to disguise their ties to the group. Investigations into ByLock, an encrypted messaging app developed and exclusively used by FETÖ members reveal more suspects linked to the group.

Germany not meeting demands over FETÖ

According to the text of the speech by Çavuşoğlu reported by media outlets, Germany was one of the countries that is far from meeting Turkey's demands regarding alleged FETÖ members. In September, President Recep Tayyip Erdoğan called on Berlin to extradite hundreds of FETÖ terrorists residing in Germany, while Chancellor Angela Merkel said Germany needed more evidence if it was to classify FETÖ as a terrorist organization, as Ankara is demanding.

German authorities have acknowledged that Turkey filed for arrest and search warrants for hundreds of FETÖ fugitives in the aftermath of the July 15, 2016 coup attempt but they did not disclose the status of those requests. Replying to a question by the Left Party lawmakers in September, the German government said that Turkey, via Interpol, sought 848 search warrants (to be carried out by German police) and asked for the arrests of 791 suspects after the coup attempt. Turkey also asked German authorities to locate wanted suspects in 57 instances. German Interior Ministry earlier announced that 296 people bearing diplomatic passports and 881 others with service passports – issued to public sector employees, soldiers etc., applied for asylum in Germany from July 2016 to June 2018, and most are believed to be FETÖ infiltrators in the military and bureaucracy. Half of them were granted asylum.

Acting under the guise of a charity movement, FETÖ is widely tolerated in Germany where about 14,000 of its members who fled Turkey following the coup attempt, and those who were settled in the country beforehand, reside. Both federal and state governments embrace FETÖ members and turn a blind eye to their activities. It makes Germany a favored destination for the terrorist group. Along with the embrace by Berlin, FETÖ members find assistance from fellow members of the group in the form of non-profit organizations that seemingly aim to help "refugees." Aktion für Flüchtlingshilfe (Aid Action for Refugees), linked to FETÖ, helps the group's members learn German and find jobs and accommodation in the country.

Group members, who gave interviews to German media outlets, confirmed an exodus of Gülenists from Turkey to Germany in the aftermath of the thwarted coup attempt two years ago. Some senior figures in the group, such as Abdullah Aymaz and Mehmet Ali Şengül, who are among the most wanted terror suspects by Turkey, are known to be in Germany. Turkish media describes Aymaz as the "Europe imam" for FETÖ, a title given to senior figures in the group in charge of dozens and sometimes thousands of followers. He left Turkey shortly after FETÖ's first coup attempt in 2013 failed.

One of the most significant figures linked both to FETÖ and the 2016 coup attempt who is believed to be in hiding in Germany is Adil Öksüz. Öksüz is the alleged mastermind of the attempt. Anadolu Agency (AA) reported a few months ago that Öksüz, one of the most wanted men in Turkey, lives or lived in Berlin after the coup attempt.

FETÖ, a criminal enterprise founded by fugitive Fetullah Gülen, has been directly implicated in the December 2013 judicial coup attempt and the July 15, 2016, military coup attempt against the democratically elected government of Turkey.

With its media and business arms, the terrorist group created significant public clout, which was augmented by infiltration of state institutions, principally the judiciary, police and military.

Over the years, FETÖ transformed into a behemoth, with finance, business, education and media arms spread across the globe. It has charter schools in the U.S., mainly used to collect and siphon federal funds for various FETÖ projects, while its schools in the rest of the world are usually used for recruiting.