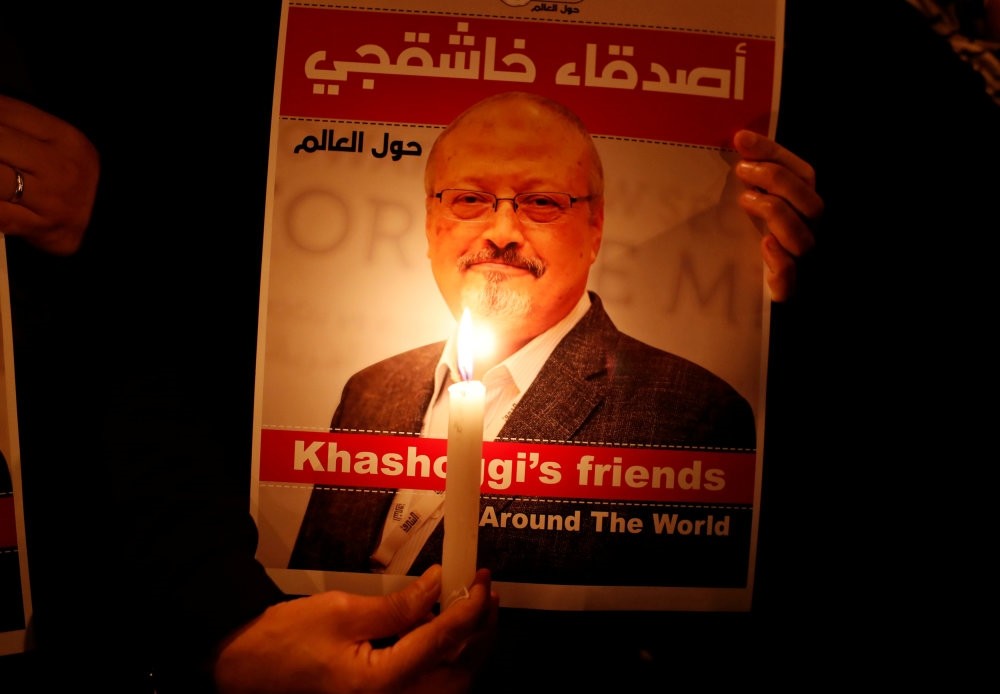 A demonstrator holds a poster with a picture of journalist Jamal Khashoggi outside the Saudi Consulate in Istanbul, Oct. 25.
by Daily Sabah Nov 16, 2018 12:00 am

Turkey sees Riyadh's move to seek the death penalty for five suspects in the Khashoggi killing as positive but unsatisfying, as the main culprits have yet to be revealed

A statement from Riyadh over the killing of Saudi journalist Jamal Khashoggi was "unsatisfying," Turkey said yesterday, adding that Ankara will continue to watch the case. Saudi Public Prosecutor Saud Al-Mojeb's remarks were announced yesterday, saying that five Saudi officials face the death penalty for the murder of Khashoggi, who died after being drugged and then dismembered. Shortly after the Saudi prosecutor's statement was announced by Sheikh Shalan al-Shalan, spokesman and deputy attorney-general, Turkish Foreign Minister Mevlüt Çavuşoğlu responded by saying that regardless of the positive steps taken by the Saudi government, the statement remains unconvincing.

"We understand that 11 people are currently detained. Previously, 18 people were detained. There is the demand for the death penalty for five of these 11 people. Why are the others left free? I have to say that at this point, I did not find some statements fully satisfying," Çavuşoğlu told a conference in southern Turkey's Alanya. He added that Turkey will continue to closely follow the case. "Where is Khashoggi's body? The ones who gave the order, [the] ones who are the real instigators should be revealed. This process should not be closed down this way," Çavuşoğlu emphasized, saying that his Saudi counterpart had informed him about the statement beforehand.

Khashoggi, a columnist for The Washington Post and a critic of Saudi Crown Prince Mohammed bin Salman, also known as MBS, was reported missing by his fiancee Hatice Cengiz after entering the Saudi Consulate in Istanbul to obtain marriage documents on Oct. 2.

Khashoggi was immediately strangled and then dismembered, presumably by a 15-person assassination team that arrived in Istanbul from Saudi Arabia and visited the consulate when the journalist was inside. The body is yet to be found.

Following the murder, the journalist's body parts were handed over to an agent outside the consulate grounds, al-Shalan further said. He denied that the crown prince had any knowledge of the murder although a travel ban was imposed on his former top aide Saud al-Qahtani. It is expressed that al-Qahtani had met the team, ordered to repatriate Khashoggi, ahead of their journey to Istanbul and briefed them on the journalist's activities. 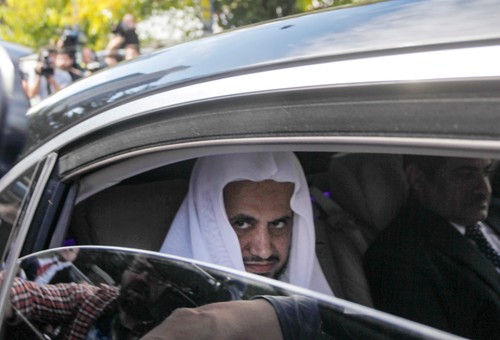 Saudi Arabia's foreign minister also said yesterday that the crown prince had "absolutely nothing to do" with Khashoggi's murder. When asked about possible international sanctions in response to the case, Adel al-Jubeir told reporters there was a difference between sanctioning individuals and holding the Saudi government responsible.

Jubeir added that there were still unanswered questions in need of answers, but Ankara had refused three requests from Riyadh to provide proof of their account of the killing.

So far, Turkey has not accused anyone of directly ordering the killing, though President Recep Tayyip Erdoğan has excluded King Salman from the possible suspects, who (the suspect) Turkey says is a high-level figure in Riyadh. Still, the case has brought near unprecedented international scrutiny on Saudi Arabia and its powerful crown prince, who Khashoggi had openly criticized.

Officials in Turkey have repeatedly called on the Saudi government to take responsibility and hold those responsible for the murder accountable.

President Erdoğan said Monday that Saudi Arabia knows that the killer is among the group of 15 people, who arrived in Turkey a day ahead of the killing.

On Nov. 4, The Wall Street Journal reported that al-Qahtani, known for his work for the crown prince as a social media adviser responsible for the smear campaign against dissidents, was both the planner and director of the killing.

According to The Wall Street Journal, al-Qahtani is now under criminal investigation and was fired from his job as a media adviser.

The article also reported that al-Qahtani first tried to convince Khashoggi to return to Riyadh but when he failed, he planned the murder. The article questions whether or not the crown prince was aware of the plot since al-Qahtani was known as his "right-hand."

Al-Shalan further added that the deputy chief of Saudi Arabia's intelligence, General Ahmed al-Assiri, gave the order to repatriate Khashoggi and "the head of the negotiating team" that flew to the Istanbul consulate had ordered his murder.

He also said that al-Assiri deemed Khashoggi a threat because of his work as a writer and because he was allegedly backed by groups and countries that are hostile to Saudi Arabia.

Referring to Riyadh's implication of the murder not being preplanned, Çavuşoğlu said that the dismembering of the body cannot be an impulsive decision and is premeditated.

"It is being said that the murder was committed since this person [Khashoggi] resisted returning to Saudi Arabia. The murder is premeditated. The dismembering of the body is not an impulsive decision that is taken at that moment. The equipment to kill and dismember [Khashoggi] was brought [to Turkey] beforehand," the foreign minister added.

Previously, after weeks of denying involvement, the kingdom admitted that Khashoggi had been killed inside the consulate but claimed the Saudi royal family had no prior knowledge of any plot to murder the journalist.

Following the statements, the U.S. Treasury yesterday sanctioned 17 Saudis for their roles in the killing of Khashoggi, Reuters reported.

On Wednesday, Çavuşoğlu said that the international investigation on the case was at a crucial stage.

"In any case, Turkey will do whatever it takes to clarify all the aspects of this murder," Çavuşoğlu told Parliament's planning and budget commission.

Turkey has conducted a transparent process and the whole world has admitted it, he noted.

The Saudi prosecutor said that the country was awaiting Turkey's response to its request for evidence and audio recordings of the crime. Turkey has been sharing information with other countries to intensify efforts to uncover details of the murder.

On Monday, Erdoğan said that audio recording of the moments Khashoggi was killed was given to Saudi Arabia, the U.S., France, Canada, Germany and the U.K.

Meanwhile, the French foreign ministry said yesterday that the Saudi investigation into the Khashoggi murder is proceeding in the right direction.

"We ask that the responsibilities are clearly established and that the perpetrators answer in a real trial," foreign ministry spokeswoman Agnes Von der Muhll told reporters in a daily briefing.