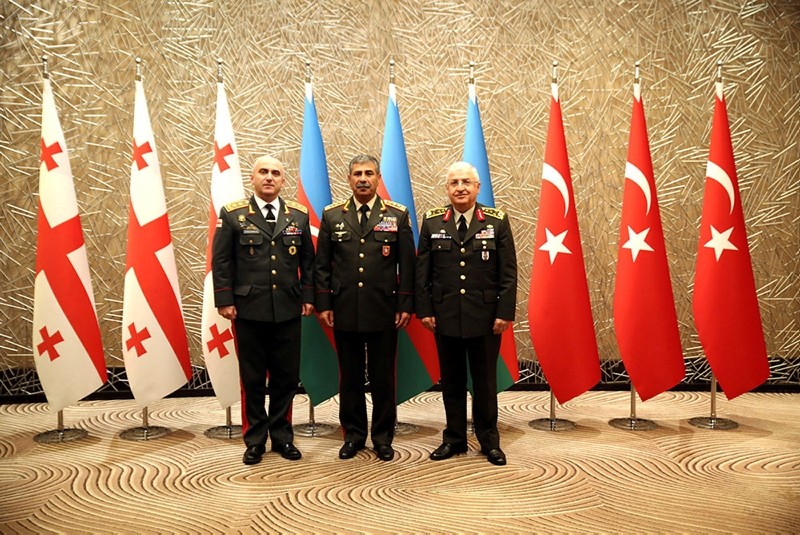 The military chiefs of Turkey, Azerbaijan and Georgia met on Wednesday in Baku to strengthen their cooperation on security issues.

Speaking at a press conference held after the signing ceremony, Güler said that the aim of the meeting was to discuss security for the strategic energy projects the three countries are carrying out in the region, as well as to support regional peace and stability.

"We exchanged sincere views on recent developments in the region and saw that as three allies and brother countries we shared similar principles."

Underlining the importance of peace and stability on both the regional and global scale, Güler said they shared the same views on "regional stability, mutual cooperation, finding peaceful resolutions to problems, and protecting the countries' territorial integrity."

Touching on economy projects, Hasanov said that the joint military exercises dubbed "Eternity" have been carried out to secure energy pipelines, and military personnel have been involved in the drills as of this year.

Chachibaia also highlighted the importance of military cooperation between the countries to provide stability in the region.

The next meeting between the armed forces commanders of the three countries will be in Turkey, Hasanov said.

The Foreign Ministers of Azerbaijan, Turkey and Georgia held a trilateral meeting in Istanbul on Oct. 28 which also aimed to promote peace, prosperity, and stability in the region.

Over the past years, relations between Turkey, Azerbaijan and Georgia have reached the level of strategic partnership and have played an essential role in ensuring peace and stability, sustainable development and the welfare of the three nations.