Calls for an international investigation into murder of Khashoggi getting louder 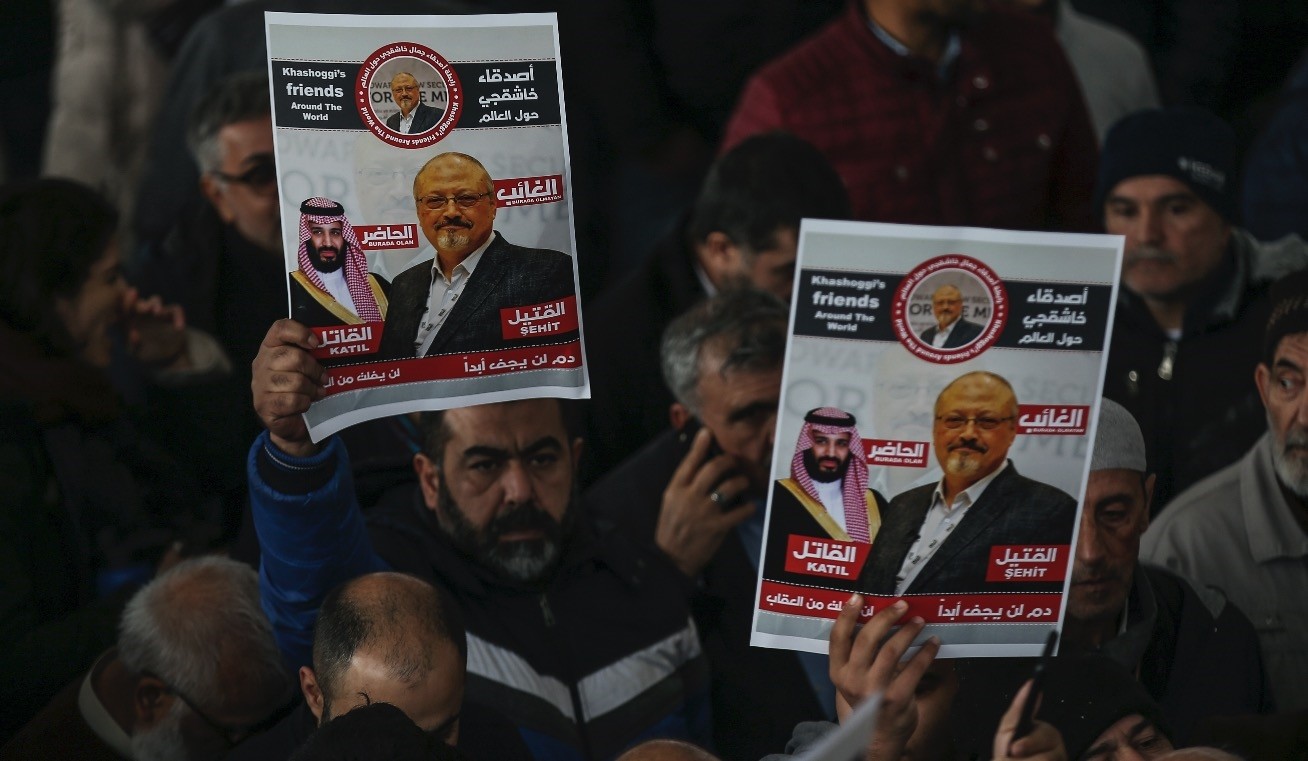 People hold posters as they attend funeral prayers in absentia for Saudi writer Jamal Khashoggi who was killed last month in the Saudi Consulate in Istanbul, Nov. 16.
by Daily Sabah with Agencies Nov 23, 2018 12:00 am

The circumstances surrounding the Khashoggi murder largely remain a mystery and the process needed to reveal the truth is taking longer than expected, causing the global community to call for an international investigation

The International community expects an international investigation into the murder of dissident journalist Jamal Khashoggi as the details of the case are still waiting to be uncovered, Ankara said yesterday. "Since the process [of uncovering the case] took a long time, demands are coming to both Turkey and the United Nations from the international community for an international investigation," Foreign Minister Mevlüt Çavuşoğlu said during a joint news conference in Ankara with top EU diplomat Federica Mogherini and European Commissioner for European Neighborhood Policy and Enlargement Negotiations Johannes Hahn.

Çavuşoğlu pointed to the importance of three rapporteurs calling for the establishment of an independent investigation mechanism by sending a letter to the U.N. secretary-general. Khashoggi, a Washington Post columnist critical of the Saudi government and its de facto ruler Crown Prince Mohammed bin Salman, went missing on Oct. 2 after entering the Saudi Consulate in Istanbul to obtain documents for marriage procedures. After initially denying and later playing down the incident as a fistfight, Saudi Arabia later accepted that the journalist's killing was premeditated and that he died in an unplanned "rogue operation."

"This is a premeditated, shocking murder that cannot be accepted by anyone and all its details should be revealed. Who are the ones that are responsible for it, who ordered it, [it] should be revealed," Çavuşoğlu said.

He reiterated Ankara's demand to try the suspects in Turkey, saying that although the murder was committed in the Saudi Consulate, according to the Vienna Convention, Turkey's laws are binding on the case. "We are expecting cooperation from Saudi Arabia on this matter, we have conveyed this demand of ours to them as well," Çavuşoğlu indicated.

He underlined that Turkey is ready to cooperate with anyone on the case, particularly Saudi Arabia, emphasizing that the country will conduct its own investigation hand in hand with the international one.

Çavuşoğlu underlined that in this process, Turkey has conducted its investigation with great care and transparency and shared information and evidence on the case with any parties who need to see and listen. Previously, Turkey had given recordings of the killing of Khashoggi to Saudi Arabia, the United States, Germany, France and Britain.

Regarding the approach of the EU toward the case, Çavuşoğlu said that although some member states are leaning toward covering up the case to protect their interests, the union's attitude on the matter is quite clear.

Mogherini also spoke on the case, saying that all those "really responsible" for the murder of Khashoggi have to be held accountable.

Calling for a "completely transparent and credible investigation," she said: "For us accountability does not mean revenge."

"We've always been against, for instance, any application of [the] death penalty, but we expect in line with our principles, values, practices on judicial systems a full investigation, transparent and fair to take place," Mogherini said.

The Saudi public prosecutor said last week that it would seek the death penalty for five suspects, among the 21 involved, in the case. Khashoggi was known for his critical views on Riyadh's policies.

New evidence in the case continues to emerge almost daily. Turkish news website Hürriyet Daily News claimed yesterday that the CIA has a recording of a phone call in which Saudi Crown Prince Mohammed bin Salman (MBS) gave instructions to "silence Jamal Khashoggi as soon as possible." It cited a prominent Turkish columnist as saying CIA director Gina Haspel had "signaled" the existence of the recording during a visit to Ankara last month. However, a Turkish official contacted by Reuters said he had no information about such a recording.

Meanwhile, Denmark said yesterday that it was suspending the approval of future weapons and military equipment sales to Saudi Arabia, citing the murder of the journalist.

Denmark is not the first EU country to take action against Saudi Arabia over the case. EU heavyweight Germany also announced earlier this week it would stop all sales of defense equipment to Saudi Arabia.

The killing has drawn unprecedented international outrage against Saudi Arabia, as many world leaders blame MBS for the killing of Khashoggi, an outspoken critic of the prince. President Recep Tayyip Erdoğan also underscored at the beginning of the month that Khashoggi's murder was ordered from the highest levels of the Saudi government.

However, despite all the evidences and international pressure, Saudi Arabia continues its non-cooperative policy and harsh rhetoric on the case. The country has warned that criticism of Crown Prince Mohammed bin Salman is a "red line," after U.S. President Donald Trump heaped praise on the kingdom in defiance of warnings that he was giving Riyadh a pass on a journalist's grisly murder.

Saudi Foreign Minister Adel al-Jubeir said on Wednesday that calls for the crown prince to be held accountable for the grisly killing of Khashoggi would not be tolerated.

His comments came as the U.S. president praised Saudi Arabia for keeping oil prices low, one strand of his argument against punishing Riyadh even though the CIA reportedly found strong evidence that the crown prince was involved in the murder. The president said the U.S. may "never know all of the facts" and the country will continue its relations with Saudi Arabia in order to pursue American interests.

"Our intelligence agencies continue to assess all information, but it could very well be that the crown prince had knowledge of this tragic event - maybe he did and maybe he didn't!" Trump said in the statement, which was released by the White House.

"In Saudi Arabia our leadership is a red line. The custodian of the two holy mosques [King Salman] and the crown prince are a red line," al-Jubeir told the BBC.

Al-Jubeir insisted that Prince Mohammed had not been involved in the killing.

"We have made that very clear. We have investigations ongoing, and we will punish the individuals who are responsible for this," he said. The foreign minister further said that the murder was a "rogue operation" by intelligence officers. Al-Jubeir also said any possible U.S. sanctions on Saudi Arabia would be shortsighted.

"A clear and dangerous message has been sent to tyrants around the world: Flash enough money in front of the president of the United States, and you can literally get away with murder," Ryan wrote in an opinion piece for the newspaper. In the article, Ryan described a statement by Trump in support of Saudi Arabia as "bizarre, inaccurate and rambling."

According to the U.S. State Department, Khashoggi was barred from media appearances in Saudi Arabia after criticizing Trump in late 2016.

In its most recent report on Saudi Arabia's human rights record, the department said Khashoggi moved to the U.S. in "self-exile" in September 2017 and "could face arrest upon returning home" due to his writings. The report said Khashoggi's column in Saudi newspaper al-Hayat had been cancelled under political pressure.

The ban came after Khashoggi appeared at a policy forum at think tank The Washington Institute on Nov. 10, 2016, and made remarks critical of Trump's Middle East policies, describing Trump's stance on the Middle East as "contradictory."