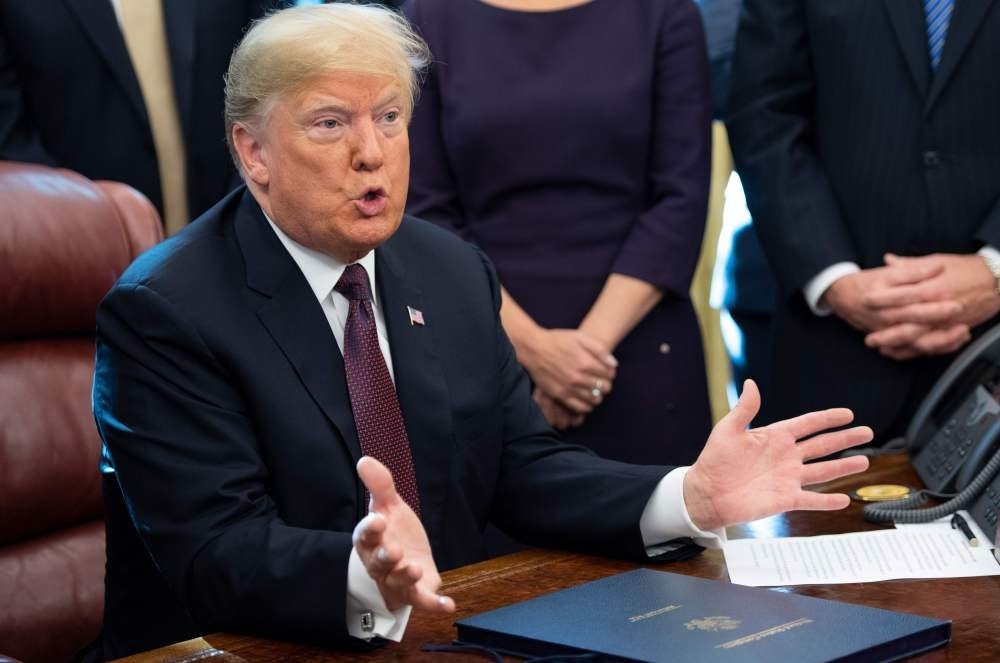 President Donald Trump on Nov. 20 said the brutal murder of dissident journalist Jamal Khashoggi by Saudi operatives will not derail the U.S.-Saudi relationship, even if Crown Prince Mohammed bin Salman were found to bear responsibility.
by Daily Sabah Nov 24, 2018 12:00 am

Turkey thinks that the U.S. is inclined to turn a blind eye on the killing of Saudi journalist Jamal Khashoggi and cover up the murder due to its economic interests with Saudi Arabia.

"This statement that Trump made also means, 'No matter what happens, I will turn a blind eye.' This is not a correct approach. Not everything is money," Çavuşoğlu said.

U.S. President Donald Trump said Tuesday, Washington would remain a "steadfast partner" of Saudi Arabia despite saying that Crown Prince Mohammed bin Salman (MBS) may have known about the plan to murder Khashoggi. In another speech Wednesday, the U.S. president ignored criticisms that he gave Saudi Arabia a free pass on the murder of the dissident journalist, instead praising the kingdom for keeping oil prices low. Çavuşoğlu added the U.S. had not informed Turkey about its possession of an audio recording regarding Khashoggi's killing, a day after a Turkish daily reported that the Central Intelligence Agency (CIA) was in possession of a recording in which the crown prince discussed silencing Khashoggi with his brother.

Turkish daily Hürriyet claimed Wednesday that the CIA has a recording of a phone call in which MBS gave instructions to "silence Jamal Khashoggi as soon as possible." It cited a prominent Turkish columnist as saying CIA director Gina Haspel had "signaled" the existence of the recording during a visit to Ankara last month. Also, the Washington Post reported last week that the CIA has concluded that MBS ordered the assassination of Khashoggi.

However, Trump disputed the CIA report and told reporters on Thursday, "The CIA points it both ways. Maybe he did, maybe he didn't," a phrase he had used in a controversial statement released on the incident on Tuesday. When the reporter asked who should be held responsible for the killing, Trump responded that "Maybe the world should be held accountable 'cause the world is a vicious place.'"

Khashoggi, a frequent contributor to The Washington Post and critic of the crown prince, was killed on Oct. 2 inside the Saudi Consulate in Istanbul. After weeks of denying any involvement in the crime, Saudi Arabia later admitted that Khashoggi had been killed inside the consulate but denied that the royal family and crown prince had any prior knowledge of or responsibility for Khashoggi's killing. The incident was blamed on lower-level officials, including five that are now facing the death penalty over their involvement. The Saudi public prosecutor said last week that it would seek the death penalty for five suspects, among the 21 involved, in the case. Ankara has said the statement is not satisfactory and demanded genuine cooperation from Riyadh. In addition, the Turkish official continues to pose questions on the whereabouts of the body and the ultimate decision-maker in the killing of Khashoggi.

Saudi Foreign Minister Adel al-Jubeir said Wednesday that calls for the crown prince to be held accountable for the grisly killing of Khashoggi would not be tolerated.

Quoting U.N. human rights chief Michelle Bachelet on Friday, Elizabeth Throssell, U.N. human rights office spokeswoman said: "The case of Khashoggi must be investigated in an independent and impartial manner to show a full examination of an accountability for the human rights violations committed." She added that the involvement of international experts with full access to the evidence and witnesses would be "highly desirable." Throssell added that Khashoggi's family and the public should know all facts about the murder and that justice must be ensured.

France on Thursday imposed a travel ban on 18 Saudi citizens over their suspected involvement in the Khashoggi killing. The travel restriction applies to the entire visa-free Schengen area of 26 European states, according to a French Foreign Ministry statement.

The statement urged Saudi officials to help uncover the truth about the killing, saying: "Saudi Arabia is expected to provide a transparent, comprehensive and detailed response on this issue." Also, Canadian Foreign Minister Chrystia Freeland said Thursday, "Khashoggi case not over despite Trump's statements." "It is very clearly Canada's position that those responsible for this horrendous murder must face full responsibility for it," she said to Canadian media.Germany, on the other hand, urged Saudi Arabia on Friday to fully cooperate with Turkey in the investigation into the killing of Khashoggi. Foreign Ministry spokesperson Maria Adebahr was quoted by Anadolu Agency (AA), saying many questions regarding the murder of Khashoggi still remained unclear.

"We hope that the Saudi authorities would closely cooperate with the Turkish authorities," she stressed in a press conference in Berlin, adding that Germany and its EU partners would continue to demand that all responsible for the murder are held accountable.

Asked whether Germany supported growing calls for a U.N. inquiry into the killing of Khashoggi, Adebahr said they would like to first wait for the results of the Turkish investigation.

The crown prince will visit a "number of brotherly" Arab states at the request of his father, King Salman, the royal court said in a statement carried by the official Saudi Press Agency, without naming the countries.

Abu Dhabi's Crown Prince Mohammed bin Zayed welcomed him on his first stop in the UAE, a close ally that is part of a Saudi-led coalition battling Iran-aligned Houthi rebels in Yemen, according to the Emirati state news agency WAM. Tunisian newspaper, Business News, said he is expected to visit Tunisia on Tuesday.