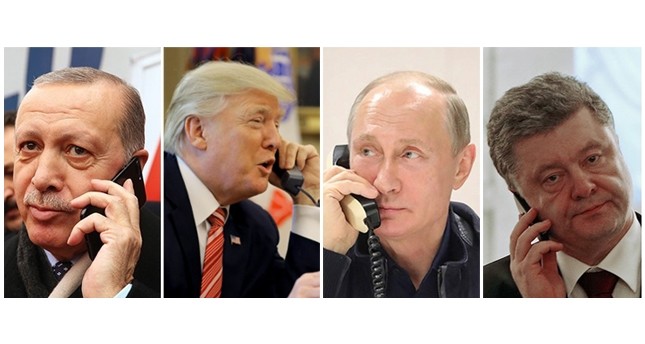 President Recep Tayyip Erdoğan discussed tensions in the Kerch Strait near Crimea with his US counterpart Donald Trump, Russian counterpart Vladimir Putin and Ukrainian counterpart Petro Poroshenko in separate phone calls and emphasized the importance of a diplomatic solution to tensions between the two neighbors, a Turkish presidency source said Wednesday.

Erdoğan listened to all three leaders and conveyed his concern over the tensions, the source added.

Erdoğan and Trump also agreed during the phone call for a meeting at the upcoming G20 meeting in Argentina.

The president previously addressed the recent escalation of tensions in the strait separating Crimea from mainland Russia in his address to the ruling Justice and Development Party's (AK Party) parliamentary group on Tuesday, saying: "We call on our Russian and Ukrainian friends to solve their problems through dialogue as soon as possible and make the Black Sea a sea of peace."

"Turkey would like to see brother nations Russia and Ukraine side by side, not facing off, when the world is faced with serious threats," he said.

The Ukrainian navy says Russian ships fired on and seized three of its artillery ships Sunday as they were sailing from Black Sea port city of Odessa to Mariupol on the Sea of Azov. Moscow says the ships violated Russian territorial waters on purpose and accuses Ukraine of plotting with its Western allies to provoke a conflict.

The incident sharply escalated tensions that have been growing between the two countries since Moscow annexed Crimea from Ukraine in 2014.

Turkey, along with the rest of the international community, does not recognize Russia's move and supports Ukraine's territorial integrity.