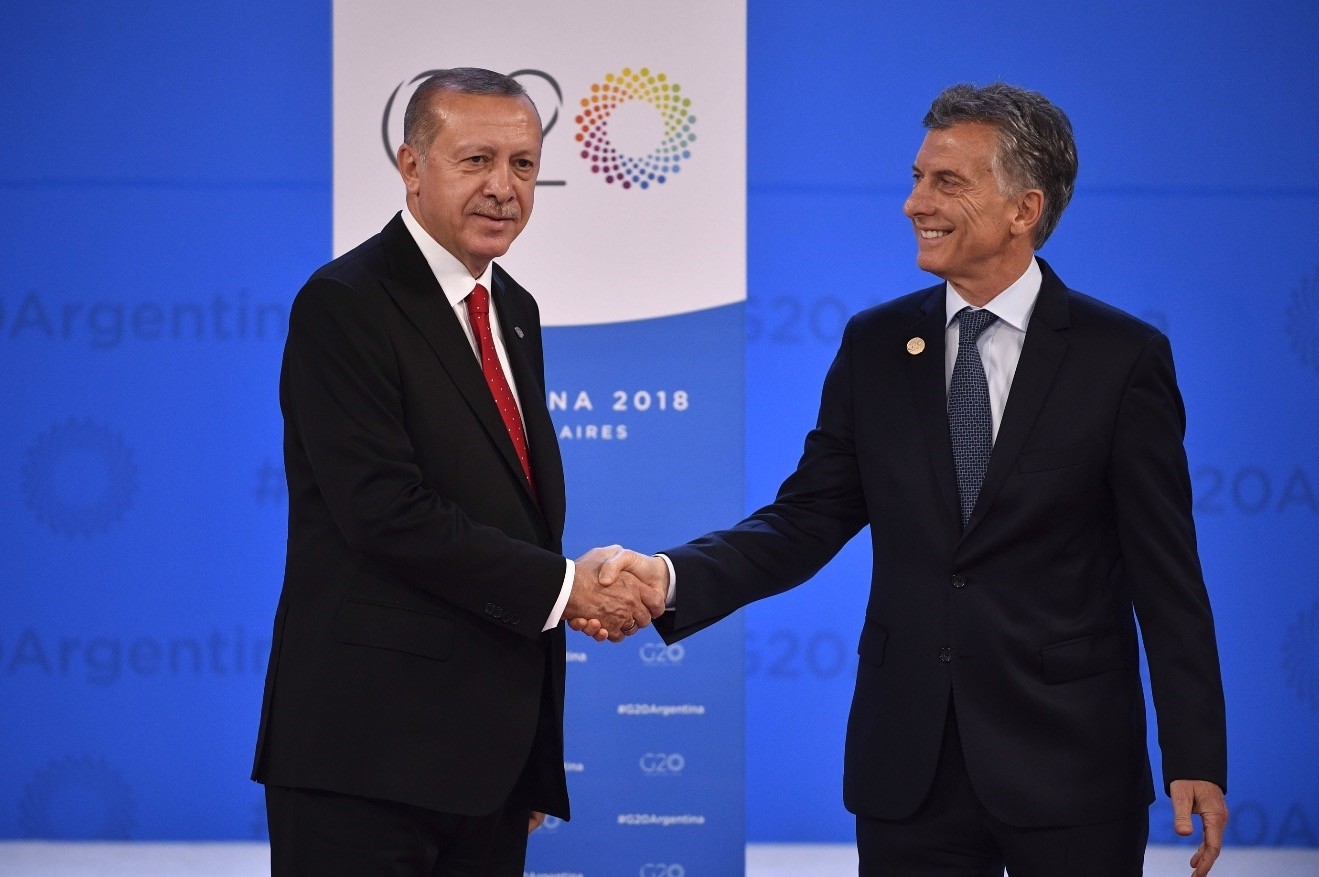 President Recep Tayyip Erdou011fan (L) is welcomed by Argentina's President Mauricio Macri at Costa Salguero in Buenos Aires during the G20 Leaders' Summit, on Friday.
by Daily Sabah with Agencies Dec 01, 2018 12:00 am

The leaders of the world's 20 largest economies came together for a two-day summit on Friday, expecting to discuss various topics, particularly the Jamal Khashoggi murder and the Ukraine crisis, in addition to economic issues

The G20 summit started on Friday in Argentina's capital Buenos Aires with the participation of the leaders of the top economies in the world. Although the initial reason behind the summit is economic with the main focus on development, infrastructure and food security, various side topics, particularly the murder of dissident journalist Jamal Khashoggi and the recent crisis in Ukraine, are expected to be discussed. The leaders arrived in Buenos Aires for the two-day summit on Thursday with their own agendas on various critical topics. The Khashoggi murder, however, seems to be the one topic that is prominent among the others.

French President Emmanuel Macron, one of the earliest arrivals, called on Thursday for international involvement and "complete clarity" in investigations into the Khashoggi case, and he said European leaders should discuss it at the meetings. The summit's host, Argentina's President Mauricio Macri, also said the matter would be "on the table" during bilateral and possibly broader meetings. Khashoggi, a columnist for The Washington Post and a known critic of Saudi Crown Prince Mohammed bin Salman (MBS), went missing after entering the Saudi Consulate in Istanbul to obtain documents related to marriage on Oct. 2. After weeks of denying any involvement in the crime, Saudi Arabia later admitted that Khashoggi had been killed inside the consulate but denied that the royal family or the crown prince had any prior knowledge of or responsibility for Khashoggi's killing.

The incident was blamed on lower-level officials, including five that are now facing the death penalty over their involvement. The killing of Khashoggi has strained Saudi Arabia's ties with the West and battered MBS's image abroad.

One of the main actors in the case, MBS, who is being accused of being the mastermind behind the crime, is also attending the summit, which increases the importance of handling the case during the summit. It is his first significant appearance overseas since the killing.

Argentina's legal authorities took initial action on Wednesday to consider a request from the Human Rights Watch to prosecute MBS for alleged crimes against humanity, particularly regarding his involvement in the murder of Khashoggi and the war in Yemen.

Following the accusations, federal Judge Ariel Lijo agreed to a request from prosecutor Ramiro Gonzalez to determine if other entities are investigating the crown prince for possible crimes against humanity before deciding whether to open an investigation in Argentina.

Argentina's legal system allows cases to be brought against crimes against humanity allegedly committed elsewhere, but it is unlikely anything will happen soon given the time it will take the judge to make a decision after the requests for information from Yemen, Turkey and the International Criminal Court (ICC) are filed by the Argentine Foreign Ministry. The judge has also asked the rights group to provide details supporting the allegations against the prince.

Yemen has been wracked by conflict since 2014, when Shiite Houthi groups overran much of the country. MBS, the former defense minister, and Saudi Arabia's allies launched Operation Decisive Storm in March 2015. The Saudi and UAE-led war in Yemen has caused growing international unease after high-profile coalition airstrikes killed scores of civilians, many of them children.

Surrounded by international pressure, MBS preferred to stay at the Saudi Embassy in Buenos Aires instead of a hotel over "security concerns." Following his arrival, he met with Indian Prime Minister Narendra Modi and spoke on bilateral relations and cooperation over security, investment, energy and agriculture issues.

It was also reported that a senior British official said on Thursday that British Prime Minister Theresa May would be ready to meet Saudi Arabia's crown prince at the G20 summit to press calls for a transparent investigation into the murder of the Saudi journalist. The British Embassy in Argentina said May's visit would be the first by a U.K. prime minister to Buenos Aires; the only other prime minister to visit the country was Tony Blair who went to Puerto Iguazu in 2001. The two countries have long been at odds over the disputed islands, known as the Falklands in Britain and the Malvinas in Argentina.

"I am going to speak to the crown prince of Saudi Arabia but it is the relationship we have with Saudi Arabia that enables me to sit down with him and be robust on our views on two issues," May told Sky News in an interview on Friday.

She said she would tell him that the investigation into Khashoggi's killing must be full and credible and that those responsible must be held to account. Regarding Yemen, she said she would encourage him to find a political solution.

"We believe that now is the time, there is an opportunity to find a solution, to come to a political solution because that is the way to ensure the future and a safe and secure future for the people of the Yemen," she said.

Meanwhile, the Saudi Foreign Ministry announced on Twitter that MBS met with the French president on Friday. Following the Saudi ministry's tweet, an Élysée Palace official said that Macron had conveyed a "very firm" message to MBS over the Saudi journalist's murder and Yemen.

When asked about if he will also meet the crown prince in Buenos Aires, U.S. President Donald Trump said before boarding his plane he would have been happy to meet him but did not have time.

In addition to expressing that he had no time to meet with MBS, Trump also abruptly canceled a planned meeting with Russian President Vladimir Putin as he headed to the summit Thursday, citing Russia's seizure of Ukrainian vessels as a source of tension in a relationship he has fostered in the face of criticism.

"Based on the fact that the ships and sailors have not been returned to Ukraine from Russia, I have decided it would be best for all parties concerned to cancel my previously scheduled meeting... in Argentina with President Vladimir Putin," Trump said on Twitter.

"I look forward to a meaningful summit again as soon as this situation is resolved!" he added, posting just after he left Washington for Buenos Aires.

The Ukrainian navy says Russian ships fired on and seized three of its artillery ships on Sunday as they were sailing from Black Sea port city of Odessa to Mariupol on the Sea of Azov. Moscow says the ships violated Russian territorial waters on purpose and accuses Ukraine of plotting with its Western allies to provoke a conflict.

The incident sharply escalated tensions that have been growing between the two countries since Moscow annexed Crimea from Ukraine in 2014. Turkey, along with the rest of the international community, does not recognize Russia's move and supports Ukraine's territorial integrity.

"This means that discussion of important issues on the international and bilateral agenda will be postponed indefinitely," he added. Putin, he said, "is ready to have contact with his American counterpart."

However, later on Friday, Peskov said that Putin will have a brief impromptu meeting with Trump, according to the RIA news agency.

The European Union also wants world leaders to use the Argentina summit to confront the Saudi crown prince over threats to journalists, and the Russian president over his country's actions in Ukraine.

European Council President Donald Tusk spoke Friday at the G20 summit and called on fellow leaders to discuss "trade wars, the tragic situation in Syria and Yemen, and Russian aggression in Ukraine."

He did not mention the Khashoggi killing, but stressed the importance of the "basic safety of journalists" and said, "it's our obligation to press our partners to respect these basic principles."

There are deep divisions among G20 leaders and Tusk acknowledged that "this is a difficult moment for international cooperation."

Meanwhile, German Chancellor Angela Merkel missed the opening of the G20 summit in Argentina after what she called a "serious malfunction" forced her government plane to make an unscheduled but safe landing.

The government's Airbus A-340 aircraft carrying Merkel and her delegation to the summit turned around after technical problems surfaced an hour into the 15-hour flight, and landed safely at the Cologne-Bonn airport.

"It was a serious malfunction," Merkel told reporters hours later, after the delegation was brought to a hotel in Bonn. "Luckily, we had an excellent crew and the most experienced pilot of the special air mission wing," she added. The delay is expected to complicate Merkel's schedule at the meeting.