Turkey working to 'diversify and deepen' cooperation with Venezuela: Erdoğan 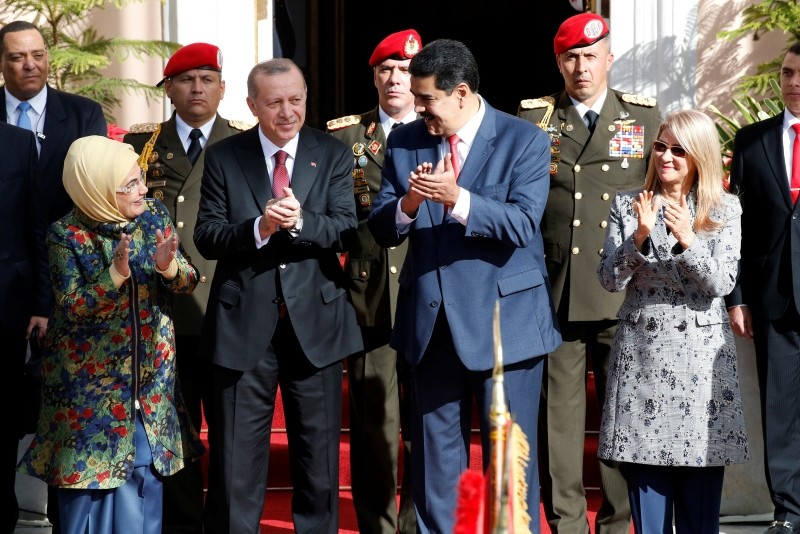 Ankara and Caracas have been making efforts to strengthen cooperation in all areas, Turkish President Recep Tayyip Erdoğan said on Monday.

"There are solid ties in friendship and solidarity between our countries. We have strong potentials in our economic relations with Venezuela.

"We are making efforts to diversify and deepen cooperation with Venezuela in every field through win-win understanding," Erdoğan said, while speaking at the Turkey-Venezuela Business Forum alongside his Venezuelan counterpart Nicolas Maduro in the capital Caracas.

Erdoğan said geographic distance between Turkey and Venezuela should not be seen as "obstacle" to strengthen bilateral ties and cooperation.

He said the trade volume between the two countries has exceeded $1 billion in the first nine months of 2018.

"We need to increase Turkey's exports to Venezuela and we need to make our trade more stable and more sustainable," Erdoğan added.

He called on businesspeople to launch projects and make cooperation to develop bilateral economic relations.

Erdoğan also said Turkey's economy has shown "strong" performance despite prevention efforts and attacks against it.

About assassination attempt on Maduro, Erdoğan said the attempt was a "dastardly attack" on both the president and Venezuelan people's "will for independence."

On Aug. 5, explosive drones went off when Maduro was giving a speech in Caracas. He blamed the far-right wing factions for the attack, saying the perpetrators were linked to Colombia and the U.S.

Erdoğan said he was honored to pay Turkey's first presidential visit to Venezuela.

He said Turkey sees Venezuela as a partner in Latin America and Caribbean, and attaches great importance to cooperation and friendship.

For his part, Maduro called on the two countries to strengthen economy, create wealth and invest within the framework of Erdoğan's visit.

"Turkey, with its extraordinary history and eagerness to work, is a country that contributes to the history of mankind," he said.

Erdoğan and Maduro will hold bilateral meetings and later the leaders will hold a joint news conference after signing several deals.