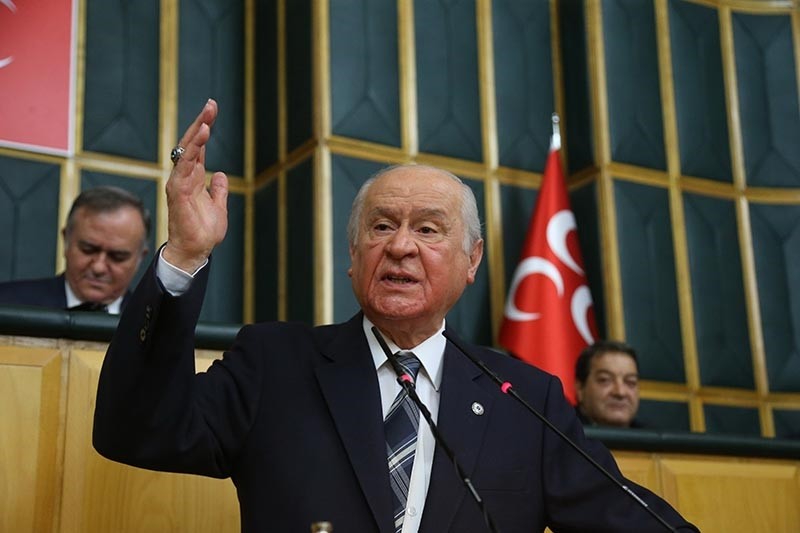 Nationalist Movement Party (MHP) Chairman Devlet Bahçeli on Tuesday slammed Saudi Arabia and United Arab Emirates, accusing them of backstabbing the Muslim world by both hiding the truth about journalist Jamal Khashoggi's death and financing U.S. actions in Syria and the region.

Speaking at his party's parliamentary group meeting in Ankara, Bahçeli said that if allegations that Saudi Arabia and UAE's financed the U.S. observation points in the northern Syrian border town of Tal Abyad are true, then these two countries have paid their "debts" to the U.S. and turned their back to the Muslim world by doing so.

The PKK terrorist organization's Syrian affiliate People's Protection Units (YPG), which dominates the U.S.-backed Syrian Democratic Forces (SDF), currently controls almost all of the Syrian territory on the left bank of the Euphrates River. Turkey describes YPG's presence on its southern border as a grave threat to its national security. It has targeted the YPG in two cross-border operations – Operation Euphrates Shield launched in August 2016 and Operation Olive Branch in January 2018 – as well as through air and artillery strikes. After repetitive demands for Washington to end its support for the YPG, Ankara also signaled that it may launch a major cross-border operation in the area stretching from the Euphrates to the Iraqi border to clear the terrorist group from its border region.

The U.S. is concerned about an all-out conflict between its NATO ally Turkey and the YPG, its main ally on the ground in Syria and in the fight against Daesh terrorists. Amid Turkey's objections, U.S. Secretary of Defense James Mattis announced in November Washington's plans to establish observation posts aiming to prevent conflict in northern Syria. Photos circulated the same week confirming that the U.S. was establishing an observation post in Tal Abyad, as claimed. Turkey sees this step as a measure by the U.S. to legitimize and protect YPG presence in the region.

"Turkey and the U.S. are allies but this (alliance) requires some moral and legal responsibilities. But the U.S. is insusceptible to this and it is side by side with the terrorist organizations," Bahçeli said.

Turkey is not a country that is mandated by others, or a country that needs observation or protection from others, Bahçeli said, adding that they will not be appeased until the territory east of the Euphrates is cleared of terrorist elements.

Saying that Saudi Arabia should first be called into account for the murder of Khashoggi, Bahçeli said: "It is not a secret how those two countries (Saudi Arabia and the U.S.) look at the treachery of July 15 (coup attempt). It is despicable for them to bear Turkish enmity and support separatist terror organizations to win the grace of the U.S."

He also said that Turkey displayed a firm stance at the G-20 summit held in Argentina.

"It is important that (President Erdoğan) voiced criticism against support for the terrorist organizations," Bahçeli said.

Erdoğan and Trump have spoken numerous times on the disagreements over Washington's Syria policy. Turkey has made it clear that it will not allow the establishment of what Ankara has described as a "terror corridor." The Turkish government has called on Washington to instead partner with it to establish stability for the peoples of the region and find a political solution to the Syrian crisis. However, it does not seem likely that the U.S. will give up on what it considers a partner for its long-term presence and interests in the region.